Getting High on Adderall – How Does It Feel Like 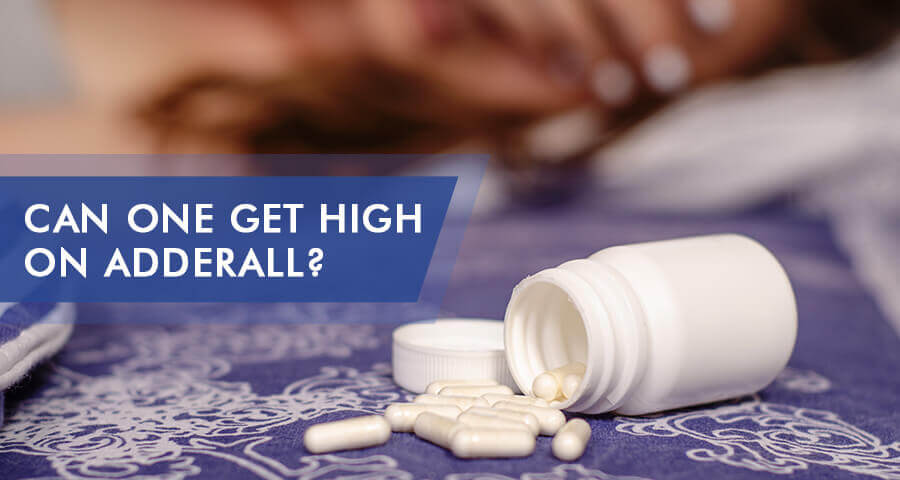 Adderall is used to treat conditions such as narcolepsy and Attention Deficit Hyperactivity Disorder (ADHD). According to the FDA, Adderall drug class is a type B stimulant. The medication has become known to be abused to get high, sometimes by those who initially used it as a prescribed treatment for a condition and then became addicted, or by those who want to feel the buzz the drug gives them. Regardless of why a person takes the drug, an Adderall high can be dangerous.
So what are the dangers of prescription Adderall high? How long does it takes for this stimulant to kick in and what are the symptoms of Adderall abuse?

An Adderall high is caused by taking excess amounts of the substance. The drug can be taken recreationally in a small amount but a high can also occur when prescribed, if taken in higher doses than medically recommended or with other substances that do not mix well (i.e. alchohol).

Any use of the drug other than prescribed, such as recreational use, can be seen as abuse and may entail legal consequences.

Understanding how much Adderall is needed to get high differs from person to person. People with a low BMI, or a certain type of diet may get high faster than a person with a high BMI. Due to this getting high on Adderall can be accidental and unintentional. That said, some seek Adderall with the sole intention of getting high sourcing either on the streets or searching for an Adderall coupon on the Internet.

How Do Addicts Get High on Adderall?

To experience an Adderall high it is necessary to take a larger amount of the medication than prescribed. Naturally, this method is dangerous as it increases the risks of overdose. Adderall overdose is a severe condition which may result even in death. The other adverse effect of increasing dosage is developing tolerance to the stimulant. There are a variety of popular consumption methods: Snorting Adderall XR,, along with those who smoke Adderall or plug amphetamine are also common. There are also those who parachute amphetamines to achieve euphoria. Finally, addicts can abuse Adderall by combining it with other medications or natural supplements that enhance its effect which can result in an individual receiving a stronger impact with the same dosage. Adderall combined with alcohol creates a high that may last longer and have more gruesome side effects than when the substance is used alone.

No one should try to get high on Adderall as it poses health risks, as well as legal ones.

Many users are unaware they can get high off Adderall and can unexpectedly experience an Adderall high.
But what does a trip feel like and what should be expected?
Many people describe the high as being free. It gives users a feeling of confidence, energy and euphoria during the early stages and peak effects of the substance. However, as a drug that contains stimulants, it can also have negative effects and create anxiety, paranoia and more.
Despite what an Adderall high feels like, it is common to experience changes in appetite and mood swings, combined with other Adderall side effects these symptoms can worsen.
The effects of Adderall are very similar to another drug called Ritalin which is also administered by doctors for the treatment of ADHD. When comparing the highs of Ritalin vs Adderall  there is virtually no difference. The same is also true when speaking about Concerta or Vyvanse, as the properties of all the drugs is stimulant based. The only difference  is the dosage of each drug.

How Long Does It Take Adderall To Kick In?

How Long Do The Effects Last?

Effects of a high are dependent on a number of factors. Firstly, the larger the amount of the medication in the system, the longer the high will usually last. Secondly, a high can also be influenced by other drugs in the system, as well as diet, BMI, and even the external environment. The euphoria of a high tends to be over quite quickly; however, the substance stays in the system 9-14 hours. The user is likely to feel the effects of it for the majority of that period. When wondering how to make Adderall more effective, users commonly mix the drug.

What are the Signs and Symptoms of Adderall High?

Due to Adderall XR being extended release, the effects of a high tend to be longer. In addition, because the substance takes longer to set in, users often take more of the substance to come up more quickly. Due to this, effects often last a couple of hours longer than the standard version of the medication.

The Signs And Symptoms Of An Adderall High

According to the US National Library of Medicine, the drug has an extensive list of signs and symptoms. Adderall high effects may include:

The drugs side effects can also be very dangerous which include symptons such as a rapid heartbeat, delusions and depressive symptoms combined with a lack of inhibition.

What are the Dangers of Adderall High?

The combination of recklessness, depression, paranoia and a lack of inhibition can make the user a potential danger to themselves and those around them. Add mood swings into the mix, and the user can become unpredictable. Other symptoms such as a rapid heartbeat can also trigger heart attacks. High blood pressure has a strong correlation with heart disease which after prolonged use are some of the more worrying effects of the substance.
A high can also be problematic when it comes to decision-making. Users can be prone to reckless action, which can cause them to lose their job, put their education at risk or even place them in financial trouble. This can trigger a downward spiral where the feeling of euphoria on drug becomes necessary due to the other issues it created.

Overcoming An Adderall High – What Can One Do?

Adderall highs are addictive and dangerous. Therefore overcoming highs and resisting abuse of the drug again is important. The best way to do this is to seek medical help. Drug addiction treatment is readily available in the US for Adderall abuse. From inpatient drug rehabilitation to outpatient care, there are a variety of ways to get the most suitable help for each person. Treatment usually starts with Adderall detox program, specifically designed to cope with withdrawal symptoms.