Addiction Resource » Drugs of Abuse » Shrooms » How Long Do Mushrooms Stay in Your System?

How Long Do Shrooms Stay in Your System: A Look at Psilocybin Half-Life

Shrooms or “magic” mushrooms are a drug that is unlikely to cause physical addiction but can cause psychological addiction instead. The two main psychedelic compounds in shrooms are psilocybin and psilocin. Speaking about drug tests, these are exactly the compounds the test will be looking for. The drug’s effects can last up to 6 hours, but how long do shrooms stay in your system? The detection time will depend on various factors, including the sample tested or body metabolism. Read further to find out how long it takes to feel the effects and when psilocybin will be eliminated from the body completely.

How Long Do Shrooms Take to Kick In?

For most, the drug’s effects will become apparent within 20-40 minutes of ingestion. However, depending on variables such as the kind of mushrooms and how they were ingested, magic mushrooms can take anywhere from 20 minutes to 2 hours to produce the effects.

How Long Do Shrooms Last?

On average, one will feel the effects of magic mushrooms 3 to 6 hours after consumption. After shrooms enter a person’s body, the psilocybin tends to reach the bloodstream within 20 to 40 minutes. The drug’s effects hit their peak when the blood’s concentration of psilocybin is at its highest. Usually, a peak happens about 90 minutes into the experience. The “peak” usually lasts no more than an hour, and then the feeling begins to subside from there. 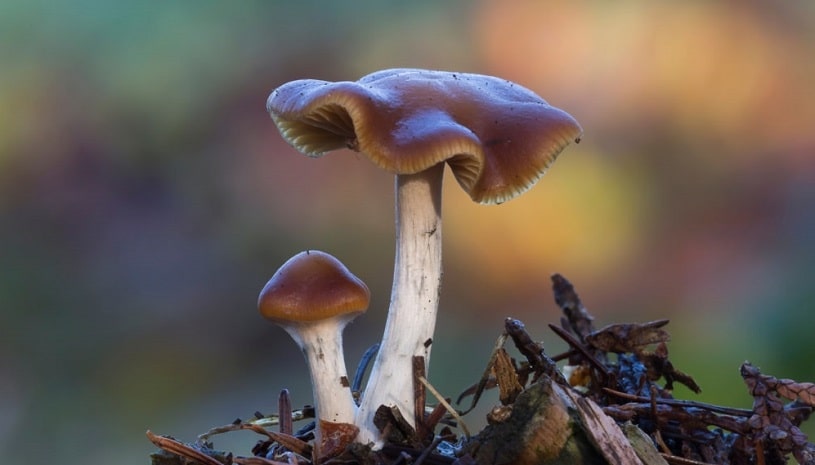 How Long Will Shrooms Be Detectable On Drug Tests?

Many drug tests no longer check for the presence of the drug itself. Instead, they test for the metabolites the body produces when it processes certain substances to prove drug use.

When psilocybin is ingested and then metabolized, it converts into the metabolite psilocin. Some species of mushrooms contain both of the substances. It generally takes 20 to 40 minutes for these metabolites to become detectable. As mentioned above, not all drug tests test for substances anymore. Tests may check for certain metabolites that indicate a person has ingested a particular substance.

When one ingested shrooms orally, the average psilocybin half-life is approximately 163 minutes. So, 50% of it will have cleared the body in two hours and 43 minutes. If one ingested a small dose, the compound should take about 15 hours to leave the body entirely.

The average half-life of psilocin is roughly 50 minutes. Therefore, half of the product ingested will be eliminated from the body in a little under an hour. The psilocin should clear out of one’s system in about 4 hours and 40 minutes.

However, certain factors can alter the drug’s original half-life by about 64 minutes in either direction. So, how long shrooms stay in the system can vary. What may clear one person’s system in seven hours may take another person 15 hours.

How Long Does Shrooms Stay In Urine, Blood, Hair, And Saliva? 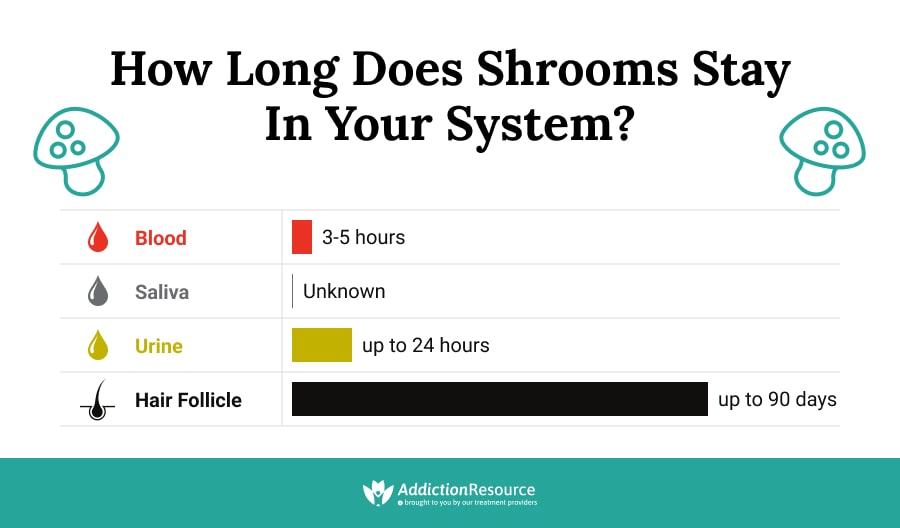 Saliva tests are uncommon in testing for the use of magic mushrooms as they can detect it only for a very short time, immediately after ingestion.

Urine tests are the most common way of testing for psilocybin and psilocin. Shrooms will usually be detectable by a urine psilocybin drug test within 24 hours. However, some trace amounts will be detected for up to a week in some users. Sometimes a chronic user, or a user who has ingested a large dose, will have different results.

A blood test would detect the presence of the drug starting around 30 minutes after ingestion. Blood tests will only detect shrooms in one’s system for a short time, about 3 to 5 hours after ingestion. However, drawing blood to detect magic mushrooms is practically unheard of except in the context of scientific research.

It typically takes a few days for a test to detect the drug in human hair. A hair psilocybin drug test would require 20-50 hair follicles, each at least three centimeters long, to be taken from the user. Shrooms can remain in the person’s hair follicles for about 2 to 4 weeks after ingestion.

What Factors Determine How Long Shrooms Stay in The Body?

On average, the body will fully eliminate magic mushroom compounds within 24 hours. However, it can take more time for some users, so one can never be sure what amount of time will be necessary for the body to get rid of shrooms. Although various factors can affect the elimination, the best way to be sure one will not test positive is to quit abusing the drug. If it’s hard to do it alone, there are treatment programs that can help. Because psilocybin mushrooms are unlikely to cause physical addiction, drug replacement therapy is not required during psilocybin detox. However, professionals’ support is necessary to overcome psychological dependency.