Dangers of Vaping: Is There a Vaping Addiction?

While a lot of people turned to e-cigarettes in the hopes of avoiding cancer and health risks, research from the American Association for the Advancement of Science believes that vaping is far from benign. Electronic cigarettes were first introduced commercially back in 2008. They have continued to gain popularity in recent years. With many still oblivious to the dangers of vaping, it’s not difficult to see why related illnesses and deaths have been on the rise. Read on to learn about e-cigarettes, why they are so popular, and the health effects of vaping.

What is Vaping and How Did it Become So Popular?

Vape is another term used to describe electronic nicotine delivery systems (ENDS), personal vaporizers, or electronic cigarettes. It is the practice of inhaling the vapor from an e-liquid through a vaporizer. To vape, one needs the atomizer, e-liquid, inhaler piece, and battery.

E-cigarettes are battery-powered devices that contain nicotine mixed with glycerin and propylene glycol and different types of flavorings. The liquid is then heated into a vapor that one can inhale. Electronic cigarettes were first introduced to help traditional smokers quit. Smoking e-cigarettes eliminates the lingering scent of cigarettes and conventional chemicals and toxins found in them. E-cigarettes have become increasingly popular, thanks to the exotic liquid flavors and new portable devices.

Nonetheless, research now indicates that e-cigs could be as harmful as conventional cigarettes.

Statistics of Electronic Cigarette Use

A study conducted by researchers at the University of Southern California showed that 13% of high school students either vaped or smoked in 2014.

A report published on the Centres for Disease Control and Prevention provides the following statistics on e-cigarette use amongst Americans:

Moreover, in 2020, 3.6 million middle and high school students were current users of electronic nicotine delivery systems. According to a survey held in 2013-2014, 81% of youth smokers admitted that the primary reason for the use of vaporizers was the availability of different flavors, like fruit, mint, or candy.

Although vaporizers lack cancer-causing elements found in conventional smoking, studies now show that their use could harm one’s health and immune system. It’s been demonstrated that vaping inhibits the function of 358 genes associated with infection-fighting compared to smoking, which only inhibits 53 genes. 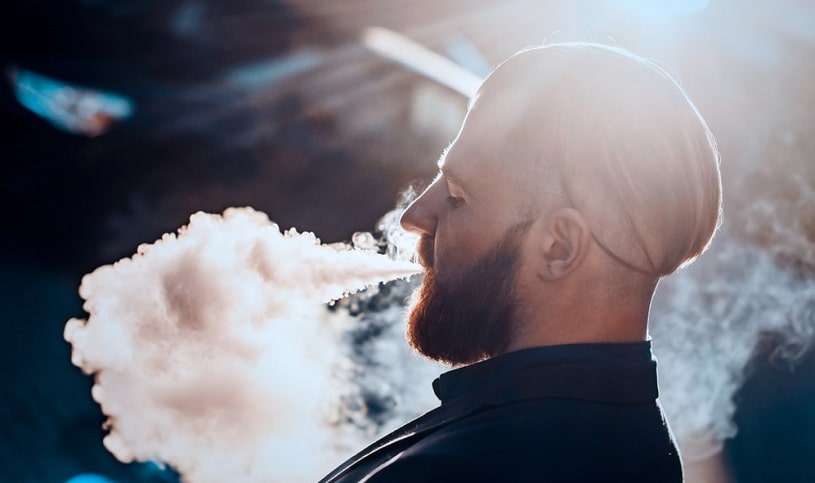 Although tobacco cigarettes are still relatively more harmful, there’s no denying the dangers of vaping to the body.

Below are the various vaping dangers users are exposed to:

Studies have shown that e-cigarettes can cause severe cardiovascular damage. Research unveiled at the 68th Annual Scientific Session of the American College of Cardiology showed that adults who regularly vaped have a 34% chance of having a heart attack. The research also showed that vapers are 25% more likely to develop coronary artery disease compared to non-vapers.

A national outbreak of EVALI in 2019 lead to further investigations by the Centers for Disease Control and Prevention on the true nature of the disease. This outbreak was the cause of a number of vaping deaths. It was found that EVALI is caused by vitamin E acetate, a chemical found in THC oil. Although vitamin E provides nutritional value when ingested, vitamin E acetate can cause damage to the lungs when inhaled.

EVALI is most commonly associated with Dank Vape. It is a product brand that contains THC. Tetrahydrocannabinol (THC) is the primary psychoactive ingredient that is found in marijuana. Therefore, vapers have a higher probability of developing EVALI when they vape marijuana.

As of 2019, around 2,807 people in the US had been hospitalized due to EVALI, with 68 recorded vaping deaths. The CDC recommends that vitamin E should not be added to vape products to prevent more disease cases.

Another danger associated with electronic nicotine delivery system use is that a vaporizer can explode. If this explosion occurs while it’s being used, it can cause severe harm to the user. In 2019, a 17-year-old boy was hospitalized after his jaw was shattered by a vape explosion. 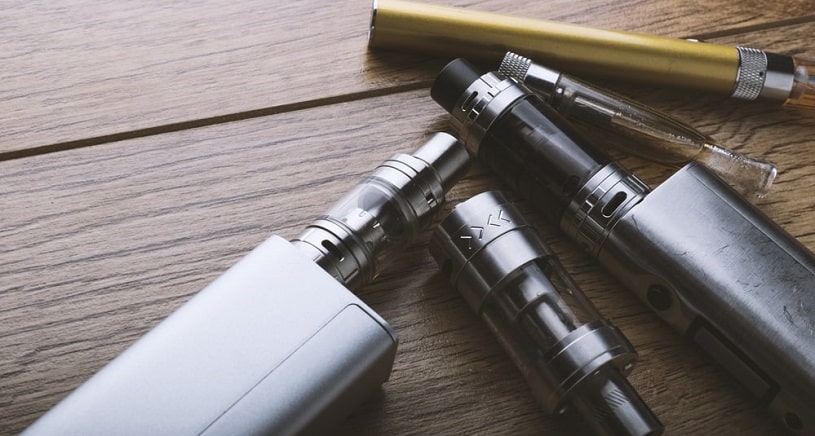 A lot has been said about how and why vaporizers explode, but some of the most common causes include battery failure, using a bad charger, improper storage, or overcharging. Considering how easy it is to buy bad batteries or chargers without knowing, users are always at risk of a vape explosion.

According to an FDA Guide, Here’s How to Avoid a Vape Explosion:

Although seizures may be one of the less common vaping dangers, more cases have begun to turn up recently. Usually, seizures are not among nicotine effects, when inhaled in low amounts, as is the case with tobacco cigarettes.

However, a large dose or a nicotine overdose can cause seizures. Unfortunately, vapers aren’t always sure how much nicotine they inhale from their pods as vaporizers have different nicotine levels. This makes it difficult for vapers to control the level of nicotine they inhale. It means people tend to inhale more of the substance through vaping vs. smoking traditional cigarettes.

Other Side Effects of Vaping

Apart from the dangers of vaping listed above, there are several other vaping side effects that could pose a threat to users’ health.

Another common concern among health officials and law enforcement is that more people are now using vaporizers to ingest synthetic drugs, flakka, and other marijuana-related compounds. Given the freedom to vape in public places, people are taking advantage of using these drugs in open areas.

Although e-liquid and vape pens lack the same toxins found in regular cigarettes, the truth is that they still contain nicotine. This substance can be addictive, not to mention that it also causes symptoms of nicotine withdrawal (especially if nicotine is ingested in high amounts, which can be the case when people use devices called box mods that produce high volumes of vapor).

Such symptoms include anxiety, irritability, restlessness, insomnia, and more. CDC is quoted as saying that nicotine is as addictive as cocaine, alcohol, and heroin. 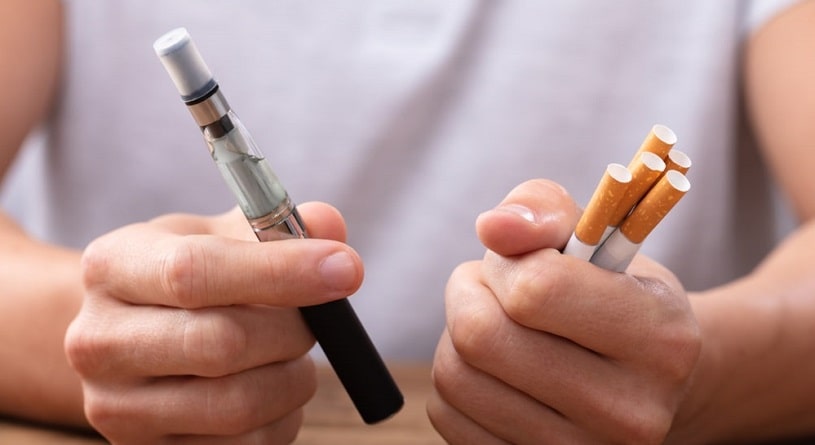 Comparing vaping vs. smoking, e-cigs come out tops in addiction, while tobacco smoking is more dangerous in terms of side effects.

Vaping deaths and illnesses are not the only problems vapers have to worry about. Addiction is also one of many vaping side effects. Nicotine is a highly addictive substance that’s found in many vaporizers. It is responsible for the addictive nature of vapes. As users continue to smoke vapes, their brain becomes used to the feeling of nicotine and may exhibit withdrawal symptoms if they stop.

Should E-cigs be an Alternative to Smoking?

Is there a really big difference concerning the safety of vaping vs. smoking? E-cigarettes have long been promoted as the safer alternative to smoking tobacco cigarettes. Unfortunately, they are not as safe as people imagine. E-cigs pose many health risks, and there have been several reported cases of vaping deaths over the years.

Also, e-cigarettes are especially dangerous for young adults. Studies have shown that nicotine can harm the development of the adolescent brain. From all available records and reports, e-cigarettes should not be considered a safe option for tobacco smoking. While it may not be as deadly, it’s definitely not harmless. 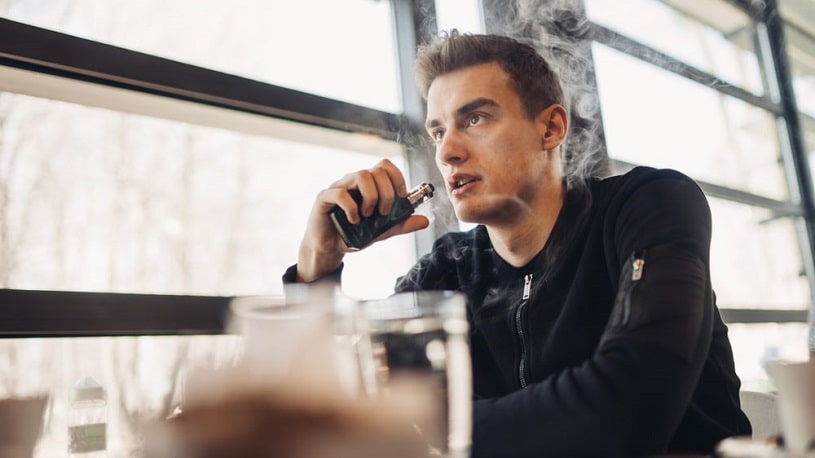 The best way to avoid the dangers associated with e-cigs and smoking is to quit entirely. It takes away the burden of worrying about what is safe and what isn’t. Luckily, there are treatment options available for those who are determined to quit smoking cigarettes or vapes. Regardless of the way of intake, it’s exactly nicotine that makes people come back to smoking. Therefore, first of all, nicotine addiction should be treated. It can be done with the help of rehab facilities or replacement therapy. Everyone chooses their own way, and the truth is, recovery is possible, no matter how long one has been smoking.