Effects Of Nicotine On the Brain and Body

Nicotine is one of the most widely used substances throughout the world. It is most common for people to obtain it from cigarettes and vaping products. About 40 million adults in the US use these products. The effects can have long-lasting health complications. Nicotine addiction is common among nicotine side effects, and it needs to be taken into consideration by all smokers. Individuals need to consider both the short and long-term health effects. This information helps the person realize why the drug’s health effects are harmful to them.

Nicotine Effects on the Brain

The human brain is an incredibly complex organ, and one drug can have multiple effects on different brain areas. The drug majorly affects the brain by modifying the activity of three important neurotransmitters.

The first of these is an important neurotransmitter known as acetylcholine (ACh). The drug’s molecular structure closely resembles that of acetylcholine and, therefore, activates the same receptors as acetylcholine. This explains certain nicotine effects, such as a temporary boost in focus, calm, and alertness. However, over time the brain becomes desensitized to these nicotine effects, requiring you to take higher doses to achieve the same effect. Failure to do so leads to unpleasant symptoms known as withdrawal. At this point, one must continuously consume the substance to stave off the unpleasant withdrawal symptoms, an important part of addiction known as dependence.

Because nicotine doesn’t stay in the system for long, and the effects wear off quickly, the withdrawal can start as soon as a few hours after the last cigarette.

The second important pathway the drug modifies is the brain’s dopamine reward pathway, also known as the mesolimbic pathway. Dopamine is the primary neurotransmitter responsible for creating and reinforcing the positive emotions we associate with certain pleasurable activities such as consuming tasty meals, spending time with loved ones, and winning competitive sports. However, certain substances can control the dopamine reward pathway, causing our brain to associate consumption of the substance with pleasurable emotions by stimulating dopamine release when the drug is taken. This further reinforces our desire to continuously consume the drug to continue feeling these pleasant emotions leading to dependence and consequent addiction. 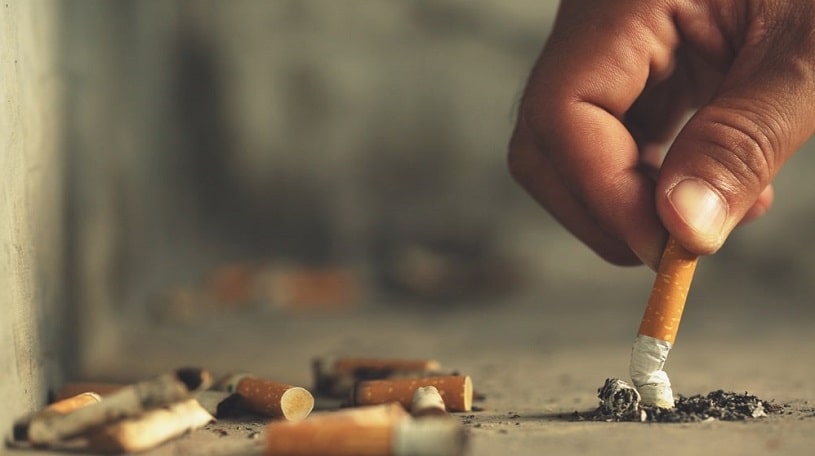 The last pathway which the drug affects significantly is the adrenergic system. It is also known as your sympathetic nervous system and is responsible for the symptoms of a “fight or flight” reaction in response to danger. The drug signals the brain to cause the release of epinephrine (adrenaline) from the adrenal glands. It leads to the characteristic nicotine buzz smokers feel when they consume the drug. It may manifest as increased alertness, an increase in your heart rate, and increased muscle activity. However, this may have several harmful health effects on the body in the long run.

Effects of Nicotine on the Body

There are numerous adverse nicotine effects on the body. Some of these are due to the direct irritation caused by smoking tobacco products, while others are due to the drug’s more complex interactions with the various systems within our body. It should be noted that consuming nicotine through e-cigarettes is not safe as well, and can lead to certain side effects of vaping. Here some of the more common health effects on the body.

Common Nicotine Side Effects Include:

Aside from the above symptoms, there are some side effects of nicotine that less commonly affect people but are even more worrisome. These are usually seen in chronic consumers of tobacco products or people who have coexisting morbidity.

Less Common Nicotine Side Effects that Have Been Noticed Are:

Let’s take a look at some information about the long-term dangers of chronic tobacco use.

Does Nicotine Cause Cancer?

Tobacco use has been linked to 40% of all cancers in the US and is the most preventable cause of cancer. Smoking has been linked to cancers of the nose, lip, tongue, mouth, larynx, pharynx, esophagus, lungs, breast, stomach, kidney, bladder, pancreas, colon, rectum, and certain types of leukemias such as acute myeloid leukemia. 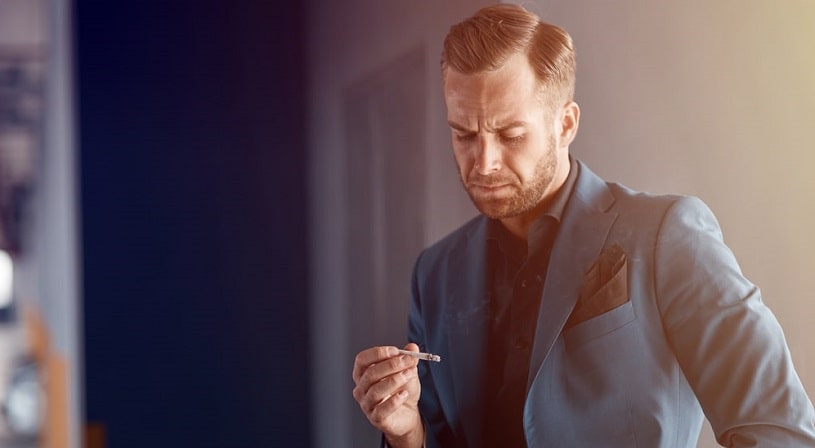 Most cancers have unique pathways leading to their progression, but nicotine contributes to both the development and progression of different cancers in several ways.

Consuming the drug via smoking tobacco only increases the risk of developing these various cancers. This is because, in addition to the harmful effects of nicotine itself, tobacco products contain thousands of chemicals, many of which are known or suspected carcinogens. Also, local irritation from smoking cigarettes creates a local environment that promotes cancerous transformation.

Effects Of Mixing Nicotine And Alcohol

Many people are drinking alcohol and smoking tobacco products at the same time. Even though both substances are considered legal, there are adverse effects that can occur with the person’s general well-being.

The main issue that needs to be addressed in terms of an alcoholic beverage and tobacco combination is the fact that the two have opposite effects. Alcohol acts as a depressant and tobacco as a stimulant. The presence of tobacco as a stimulant means the person may not feel the full effects of alcohol. In turn, they may drink significantly more alcohol than what they can truly handle. 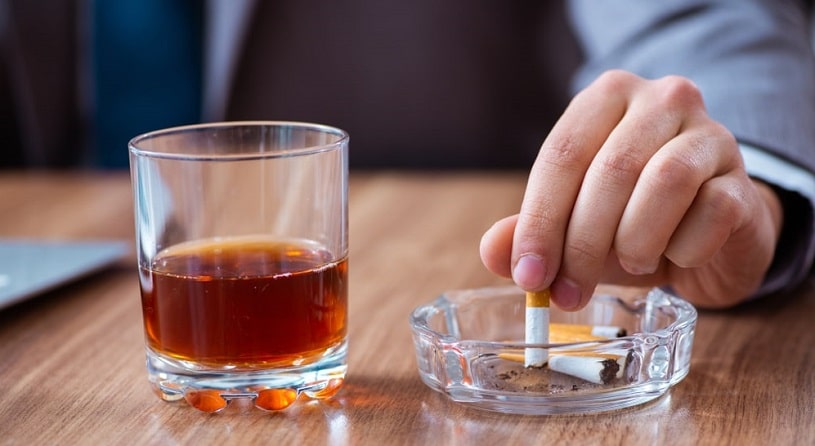 To summarize, studies indicate that up to 90% of people who are currently considered alcoholics also smoke tobacco products. Some people would also combine weed and alcohol, along with other substances – all to gain a more significant elevation in mood and the high often linked to the use of these substances. The effects of smoking and alcohol consumption as a combination leads to more serious adverse events in these patients.

Contrary to popular belief, nicotine does possess certain health benefits. Similar to caffeine, nicotine is a stimulant and promotes alertness, cardiac activity, and concentration. Several studies have also shown that smoking may also be protective against certain disease cases such as ulcerative colitis, Parkinson’s disease, endometrial cancer, uterine fibroids, and pre-eclampsia. There is also tentative evidence supporting the benefits of nicotine on cognitive performance, psychiatric symptoms, and other conditions. Still, there are few or no significant studies or reliable information in support of this. However, this does not mean that smoking is in any way beneficial to one’s health. Cigarettes and other tobacco products contain thousands of harmful chemicals, and the adverse health effects of nicotine far outweigh any potential benefits it may have.

People who smoke tobacco products are automatically exposed to nicotine. Even though secondhand smoke will generally provide a low dose, there are still risks. The smoker is not only putting their health on the line, however. It is important that smokers also consider the fact that secondhand smoke can be just as dangerous. 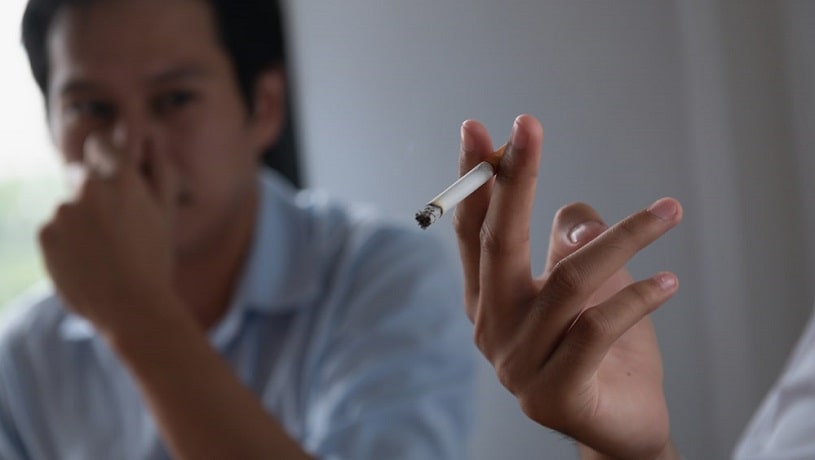 Secondhand smoke refers to the smoke that a person blows out. This smoke can produce harmful adverse health effects in people around the individual. This is because many of the chemicals found in cigarettes will still be contained in this smoke. There are at least 7,000 different chemicals in secondhand smoke that comes from a tobacco product. Among these, around 70 have been associated with cancer.

The significance of secondhand smoke especially applies to areas with children. Long-term harmful side effects of nicotine have been linked to exposure to secondhand smoke. In infants, a condition called SIDS, or sudden infant death syndrome, has also been reported. There is also a risk of causing severe respiratory infections and potentially life-threatening asthma attacks when smoking close to a baby or infant. Ear infections are also relatively common among infants who are exposed to secondhand smoke.

Assessing the Dangers of Nicotine

Smoking is a major problem due to its widespread negative effects on both the body and brain, especially after long-term use. However, it’s never too late to quit. Studies have shown that quitting nicotine consumption, especially in the form of cigarette smoking, can significantly reduce your risk of developing any of the consequences of smoking, even after long-term use. However, battling the addiction on your own isn’t easy due to the unpleasant withdrawal symptoms noticed upon cessation of the drug. That is why you should seek help in a drug rehabilitation center. They will provide the medical expertise required to make your journey to a nicotine-free life as smooth as possible.

Does nicotine make you poop?

One popular belief about the drug is its ability to stimulate defecation. While anecdotal evidence may support this, a study carried out in 2005 showed no link between nicotine and increased bowel movements. However, the study did find that coffee and warm water had mild laxative effects.

Yes, smoking tobacco can cause a transient increase in blood pressure when consumed. However, after the effects of nicotine wear off, the blood pressure typically returns to normal levels for the individual. There has been no definite link between smoking and increased incidence of chronic hypertension. However, cigarettes can lead to various other cardiovascular diseases.

Nicotine stimulates the cardiovascular system, leading to an increase in the standard resting heart rate for an individual of either gender, age, or fitness level. However, it also slows the rate at which the heart speeds up during exercise and reduces the individual’s expected maximum heart rate.

Does nicotine make you lose weight?

Several studies have shown a positive link between smoking and weight loss. Weight gain upon smoking cessation is a well-documented phenomenon, and how the drug affects weight control is still poorly understood. Some individuals attribute this to its stimulatory effect on metabolism, but this theory is still tentative at best.

Does nicotine keep you awake?

While nicotine is a stimulant and can temporarily mask exhaustion symptoms by creating an artificial nicotine buzz, it does not significantly affect sleep onset. However, taking the drug may cause dependent individuals to wake up at night for a quick smoke due to falling levels of the drug, leading to significant sleep disturbances.