Every year, thirty-five million smokers recognize the harmful effects of smoking and have the desire to quit the habit. Of those who try to quit, 85% go back to smoking after a week or less.

Nicotine Abuse: How It Happens and How It is Ended

This alarming statistic goes to prove that nicotine, especially when tobacco-delivered, is highly addictive (and it doesn’t matter if it comes in forms of a traditional cigarette or electronic cigarette). It causes physiological and mental dependence that are accompanied by changes in the emotions and attitude of a person involved. Anyone who is addicted to nicotine will have a hard time quitting due to extreme cravings and withdrawal symptoms.
Like any other type of drug abuse, nicotine addiction is a complex matter that has been the subject of countless scientific studies through the years. There is no single way to determine whether a person is addicted to nicotine. However, there are indications and symptoms to look out for to know, and subsequently, receive proper medical attention at the soonest possible time.

What makes a person more likely to smoke?

A person is much more likely to smoke if he or she lives with someone who smokes or is exposed to smoke, at a young age. Other risk factors for developing an addiction to nicotine include genetics, environmental factors, and mental illness.

Who is at Risk of Nicotine Abuse and Addiction?

Nicotine abuse and addiction are terms that are often interchanged with tobacco addiction in scientific papers. While nicotine abuse and addiction may involve other sources such as smokeless tobacco, nicotine patches, and gums, or electronic cigarettes with high nicotine content, cigarette smoking is the most common source of nicotine for a highly dependent drug user.
Anyone who smokes lives with someone who smokes, or is exposed to smoking at a very young age is prone to nicotine addiction.
This is because nicotine is a very addictive substance that interferes with different brain chemicals. Smoking does not only introduce nicotine into the smoker’s body—rather, it produces 7000 more chemicals that are contributory to the addictive attributes of cigarettes.
In the US, nicotine addiction is on the top list of any form of substance abuse. More people are addicted to nicotine than any other addictive drug.
There are many risk factors for developing nicotine dependence, including environmental influences from family and friends, genetics and prenatal nicotine consumption (through the smoking mother), age, the use of other substances, and various mental illnesses. From these risk factors, it is easy to determine which group of people is most likely to get addicted to nicotine.

Smoking Adolescents: Frequency and the Reasons Behind

Adolescents made up 60% of the total new smokers in 2010. Most of them below the age of 18, these first-time cigarette smokers are more likely to die prematurely compared to non-smokers.
Apart from peer pressure, psychological dilemmas during puberty, and curiosity, studies show that the subject adolescent rats were more vulnerable to addiction. Due to their receptiveness to nicotine and other substances found in cigarette smoking, such as acetaldehyde, adolescents are more at risk of being addicted to nicotine compared to other age groups. In fact, even some teenagers who smoke irregularly may develop addiction at some point.

Children who See Their Parents Smoke

As early as conception and fetal development, an individual’s nicotine addiction risk factor may start due to smoking pregnant mother. According to a study that was published in the Biological Psychiatry, prenatal exposure to nicotine and high levels of stress hormones increase the fetus’s risk of nicotine dependence during later years. This is particularly applicable to female babies.
Another study says that children who have smoking parents are more prone to smoking later on. The longer the parents smoked, the higher the probability became for the children to become nicotine addicts themselves.
The author of the study, Darren Mays, said that “Our analysis showed that the longer adolescents are exposed to a parent’s smoking when the parent is addicted to nicotine, the more likely they are to begin smoking and to become regular smokers in the future.”

Any form of substance abuse other than nicotine, such as cocaine, heroin, and alcohol, increases the person’s urge to smoke. The result is, of course, a higher risk of getting addicted to nicotine. One out of ten Americans aged 13 and above is addicted to drugs and alcohol. Less than one in every five adults in the country are cigarette smokers.
There is also scientific evidence that proves that nicotine is even harder to quit compared to heroin. Adding to the fact that nicotine sources, like cigarettes and smokeless tobacco, are widely advertised and sold, nicotine is an easy source of dopamine-releasing chemicals. Ironically, it acts just as quick in decreasing the dopamine levels in the body that makes cravings more frequent and strong.
Depression, anxiety, and other forms of mental illnesses also mean higher risks of being addicted to nicotine. This does not only apply to adults, but to adolescents as well. According to research, teenagers who suffer from mental depression are 13 times more likely to smoke and begin their journey towards nicotine abuse.
In 2010, the direct relation between smoking and depression among adults was confirmed through a study led by the Centers for Disease Controls and Prevention. The researchers said that people above 20 years old with depression had double the risk of being cigarette smokers. The more serious the depression becomes, the more they are likely to smoke and abuse nicotine.

Effects of Nicotine Addiction, How One Becomes Addicted

Nicotine easily enters the bloodstream once smoked, chewed, or absorbed through the skin. Within 10 seconds, it can reach the brain and interfere with the production of certain chemicals that affect the emotions, mood, energy, and overall performance of the body.
Among the more than 7000 chemicals that enter the body when smoking cigarettes, nicotine is the most addictive substance that causes the brain to release more epinephrine, which handles the increase in blood pressure, heart rate, and breathing. It is important to know how long nicotine stays in your system.
Nicotine also affects the brain’s reward system by increasing the production of dopamine and serotonin, while suppressing the release of these chemicals without their presence. The effects are short-lived, thus urging the smoker to light another cigarette after a few minutes or hours once the levels drop.
When the levels of these chemicals are boosted, the smoker feels energized, light, and motivated. However, once they decrease, the mood alters negatively, and the person becomes cranky and easily irritated. This makes quitting all the more difficult, since smokers or nicotine addicts become dependent on the substance every time a stressful event takes place, or each time they finish their meal. Some people can smoke more than 5 cigarettes in a row, but does it cause a nicotine overdose?

Why is nicotine harder to quit than other substances?

The reason people find nicotine harder to quit than other substances is because cigarettes and smokeless tobacco are legal, easy to buy, and widely advertised, whereas illegal substances are more difficult to acquire and carry even more negative stigmas and legal consequences.

How many people attempt to quit smoking and fail?

Every year, thirty-five million smokers recognize the harmful effects of smoking and have the desire to quit the habit. Of those who try to quit, 85% go back to smoking after a week or less, so that is a nicotine relapse. 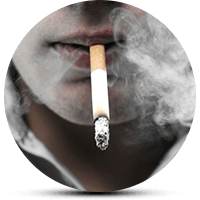 Individuals who smoke cigarettes, cigars, e-cigarettes will have supplies with them. Cigarettes and cigars come in packages and lit with a lighter or matches. E-cigarettes are an electronic device and containing a liquid that turns into vapor. Each version of smoking includes other accessories as well, but the habit of smoking will be noticeable to others.
There may also be smells associated with those who smoke. Cigarettes and cigars will leave a scent on someone’s clothes, in a vehicle, in a room, and on their breath. E-cigarettes may leave a scent as well, but it will be different from cigarettes and cigars. Many e-cigarettes or vapor will have other flavors which do not smell like tobacco.
Due to changes in laws and policies about smoking in buildings and public places, people who smoke need to leave a location to smoke. For example, many workplaces no longer allow smoking in buildings or on company grounds. Therefore, those who smoke must exit the area they work in and go to another place to smoke, which means time away from an activity to feed the habit.
We can determine abuse by some nicotine addiction signs.

Where to Get Treatment and Support

If you are addicted to nicotine, or if you know anyone who is, make sure to get treatment and support at the soonest possible time. Nicotine addiction does not only affect personal relationships and behaviors but also puts your health at serious risk.
A few alarming, yet commonly known facts are:

There are different treatments and methods available for nicotine addiction, each one with different success rates depending on what suits the individual. Nicotine replacement therapies are the most advertised, claimed by the US government to take the best effect in smoking cessation when used with behavioral therapies. Medical treatments and rehab for nicotine addiction are also offered.
While taking any of the addiction treatment services or rehab facilities, a good source of continuous support should be available. This ensures that quitting the habit lasts for good, as external support and encouragement strengthen the individual’s will to quit and stay quit.
For those who struggle with nicotine addiction, but are unable to quit cold turkey there are nicotine delivery technologies that have a potential to greatly reduce the harm from inhaling combustion chemicals and carcinogens that are found in the tobacco cigarettes. The latest research from Public Health England indicates that electronic cigarettes are “around 95% less harmful than tobacco”. There are also different volunteer organizations, like Quitday.org, who also support “e-cig” technology and its harm reduction potential. You can learn more about different electronic cigarettes here as well as read the full report from Public Health England. There are even specific online applications, that allow finding local vaporizers and electronic cigarettes stores with just couple clicks (like this vape stores locator, for instance).