Lisinopril Interactions: Dangers Of Mixing Zestril With Alcohol And Other Drugs And Foods

Lisinopril, under the drug class angiotensin-converting enzyme inhibitors or ACE inhibitors, is a medication often administered for the treatment of congestive heart failure, high blood pressure, diabetic kidney disease, and other heart-related conditions. In 2018, around 97 million prescriptions of Zestril were issued in the United States. Moreover, there are possible Lisinopril interactions, and these Lisinopril drug interactions have been repetitive, making it difficult to fully determine the outcome of taking the drug alongside other medications. Lisinopril interactions occur for various reasons. In some cases, it may be a food and drug reaction, and in other occurrences, side effects may be from concomitant use with other substances and medications. For this reason, it is imperative to understand what not to eat and which drugs to avoid while taking Zestril. In this article, information about Lisinopril interactions with alcohol, other drugs, and foods such as Lisinopril and Potassium interaction, and things patients can do to avoid dangerous Lisinopril drug interactions will be provided.

In order to understand the dangers of certain substance mixtures with the medication, one has to first fully comprehend the mechanism of the drug. How does Zestril work? As an ACE inhibitor, this drug works by blocking the ACE enzyme, creating a wider blood vessel passage for blood flow, improving circulation, and heart rhythm. So how does Lisinopril and alcohol mixture become a problem?

Firstly, a Lisinopril and alcohol combination can impede the effectiveness of the drug as drinking alcohol increases blood pressure, which works in reverse as the medication. An inverse possibility is a drop in blood pressure that leads to dizziness or a sudden increase in blood pressure to its extremities leading to heart failure. Typically, a mixture of Lisinopril and alcohol presents with side effects, and the effects of either Prinivil (another brand of Lisinopril) or alcohol may be amplified, leading to health complications. Aside from this, according to a study, even a 60mL amount of beer may already make Prinivil ineffective. In the study, it was reported that those taking Prinivil who consumed small amounts of alcohol were seen to have higher blood pressure compared to those who did not consume.

Other Dangers in Combining Lisinopril and Alcohol May Bring Are the Following:

Never combine Lisinopril and alcohol together as alcohol exacerbates the side effects of Prinivil. Also, anyone who accidentally took these two is required to not operate any machinery as this may lead to accidents. Any patient experiencing any of the dangerous events above must seek emergency care in order to avoid unwanted events that can endanger the health of the patient. 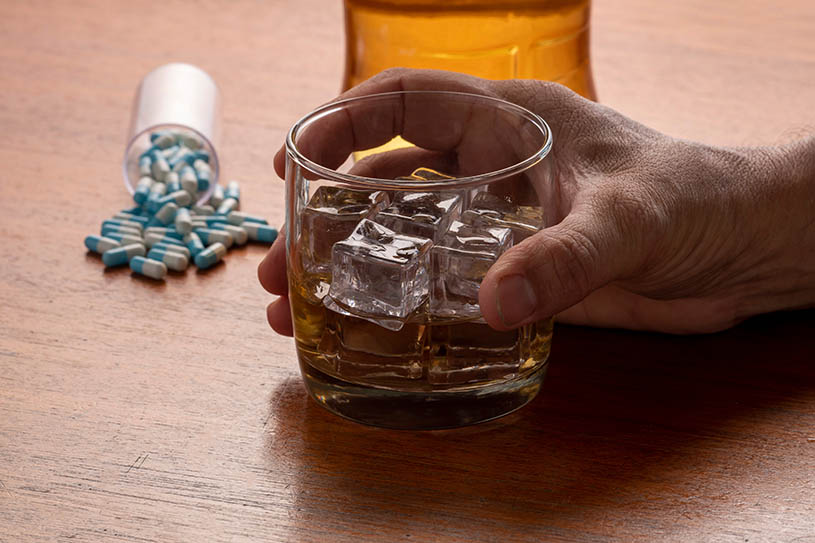 When taking Zestril or any other drugs, it is important to know that Lisinopril interactions are always possible to occur. Moreover, these Lisinopril drug interactions may be mild or moderate. In the case of Zestril, there is a long list of drugs that should not be used together with it. In this section, information about warnings due to Lisinopril interactions with pain relievers, medications that alter renal functions, and other antihypertensives will be provided.

In Lisinopril and Hydrochlorothiazide interaction, the latter comes from the drug class called diuretics. Diuretics are also called “water pills” and they work by making the patient urinate more in order to reduce the swelling and sodium in the body which causes high blood pressure. Other uses of Hydrochlorothiazide is for the treatment of diabetes insipidus and reduction in the risk for kidney stones.

Moreover, when Lisinopril and Hydrochlorothiazide are combined, drug-drug interaction with additive effects occurs. The only danger is that combining these two makes the blood pressure lower than normal, causing reduced heart rate, dizziness, and fainting. For this reason, it is a must to contact a doctor in order to properly adjust the dose of Lisinopril and Hydrochlorothiazide in case these two are needed to be taken together.

Zestril and Metoprolol are both antihypertensives that can be used alternatively in the treatment of moderate or mild hypertension. The only difference is that Metoprolol comes from a different drug class called Beta-Blockers. In certain conditions, patients may combine ACE inhibitors and beta-blockers to achieve effectiveness. According to a study, combining these two is safe, well-tolerated, and does not have a negative impact on the quality of life of the patients. However, the dose of each drug should only be recommended by a medical doctor for safety as the doctor will also rely on the existing heart disease condition of the patient.

Viagra, under the drug class phosphodiesterase (PDE) inhibitors, is not just a medication used for treating erectile dysfunction. In fact, it is also used to treat pulmonary hypertension or high blood pressure in the lungs. On many occasions, erectile dysfunction medications and blood pressure drugs have been used together with no side effects. According to a study, Zestril and Viagra are relatively safe and effective to use in treating high blood pressure. However, Nitrates such as nitroglycerin should be avoided while using these combination medications as it could lead to a drastic drop in blood pressure of the patient. In some cases, Viagra and Zestril may work together to achieve the same objective as well as boost an individual’s sex life.

Zestril and Amlodipine are drugs used in treating hypertension. Both Amlodipine and Zestril are quite effective and can be used together to curb blood pressure spikes. Zestril is a long-acting ACE inhibitor, while Amlodipine is a Calcium Channel Blocker (CCB), hence Amlodipine-Zestril concomitant use works effectively to regulate blood pressure.

Some people may experience Amlodipine besylate and Zestril side effects such as dizziness, nausea, palpitations, stomach pain, and others. When these side effects present themselves, one should consult a medical doctor immediately for additional information about the Zestril alternative.

Aspirin is under the drug class called Salicylates. Aside from being used in managing blood clots, pain, and fever, a low dose of Aspirin can help in reducing high blood pressure. According to a study, Zestril and Aspirin may be used together in low doses only and a medical doctor can give the right dose for the patient. Moreover, hypertensive patients or those with kidney issues should consult a medical doctor for confirmation of doses where applicable since misused of these two may present dangerous side effects to the health such as cardiac necrosis disease and renal damage.

Benadryl, under the drug class antihistamines, may cause a drop in blood pressure which may lead to side effects such as dizziness, palpitations, lightheadedness, and other conditions. When it is taken with Zestril, additive effects may be seen. Because of this, it can be said that it is unadvised to take Benadryl and Zestril concurrently without the counsel of a medical doctor. Some dangerous side effects when combining these drugs include fainting, change in heart rate and pulse, dizziness, and lightheadedness.

Cialis, like the medication Viagra, is under the drug class Phosphodiesterase inhibitors. This medication is an erectile dysfunction medication that can be taken with blood pressure medications in most cases. Cialis and Prinivil may work together to improve or lower blood pressure. Adverse reactions between both medications are very rare and this includes fainting and headaches.

Some pain relievers are unsafe to take with heart medications. People often ask, can one take Tylenol with Zestril? Tylenol is under the drug class analgesics and it is used to reduce and manage pain. Aside from this, Tylenol may also be used as a fever reducer. So far, no interactions have been recorded with Zestril and Tylenol but this does not mean a patient can take both of the drugs without caution. Always consult a medical doctor in order to get proper advice including dose and instructions in taking the medications as the doctor will also take note of the current heart disease of the patient.

Can one take Ibuprofen and Prinivil? Antihypertensives such as Zestril and Non-steroidal anti-inflammatory drugs (NSAIDs) such as Ibuprofen have been continually tested for more comprehensive detail on the clinical effects of concomitant use. It has been discovered in most cases that Ibuprofen increases blood pressure significantly. Prinivil and Ibuprofen can be said to have countering effects in functionality. Ibuprofen and Prinivil combinations may alter the ability of Zestril to lower blood pressure. Prinivil-Ibuprofen mixtures may affect kidney functions. Those who use diuretics or have pre-existing kidney disease are advised to speak to a medical doctor for an adjustment of Prinivil doses in order to avoid kidney failure.

What Foods Should Be Avoided When Taking Lisinopril?

There have been controversies on the effects of coffee on blood pressure drugs. It was found that coffee impeded the efficiency of blood pressure medications. Coffee and Lisinopril interactions may lead to increased blood pressure. However, there is also the issue of caffeine and decaffeinated coffee, as decaffeinated coffee was found to have a less altering effect on the effectiveness of hypertension drugs as opposed to Prinivil and caffeine. This does not completely discard the reverse effect that coffee may have on the medication.

Turmeric supplements are often taken for health and vitality. Certain doses of Turmeric can reduce blood pressure as well as sugar levels in the blood. According to a study, when these two are combined, synergistic effects may be seen which leads to a significant reduction of blood pressure. Although it may be beneficial in some cases, it is important to remember that Turmeric and Prinivil use should always be done with caution to avoid escalating the effects of the medication especially for patients with pre-existing heart disease.

What Can Be Done To Avoid Dangerous Lisinopril Interactions?

Many medications often come with counter-interactions and other forms of side effects when used concurrently with other medications. Some medications may have an adverse effect when used with mineral supplements, not to mention those minerals contained in daily foods. Therefore, it is always advised to seek help from a medical doctor before stopping Lisinopril or choosing any medication, or before using them with other supplements or regimens in order to protect the health of the patient.

Moreover, take note that the consumption of ACE inhibitors with alcohol or in large quantities may be a sign of abuse. If such behavior patterns were noticed in a patient, an addiction treatment specialist should be consulted for more information. If substance abuse disorder is indeed present in a patient, then a suitable drug rehab facility will be advised.