Side Effects of Kratom Use: What Are They? 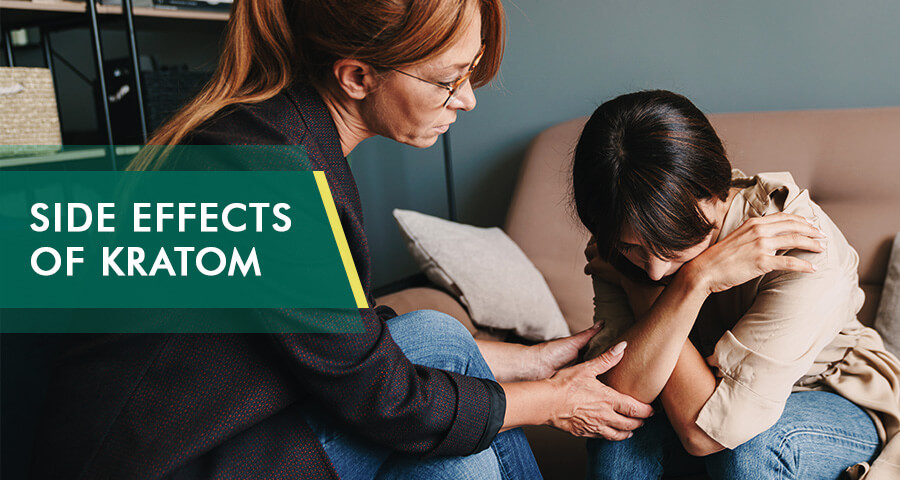 Kratom is a tree-like plant belonging to the same family as gardenias and coffee. Otherwise known as Mitragyna speciosa it grows in Southeast Asia. Kratom is herbal remedy used for centuries in traditional medicine. Its effects depend on the dose and to a lesser degree to the strain type. People usually use it as a painkiller or as an energy booster. Most medical professionals do not recommend it or even advise against the use of Kratom. Despite that, in the last 15 years, its popularity rose significantly in North America and Europe. People use it not only to self-medicate pain or withdrawal symptoms of opiate drugs. They also use it as a recreational drug.
Although not many studies are available on the subject of Kratom, we can report short-term and long-term consequences of Kratom use. Read to find out what effects users look for in Kratom and what negative impact they might experience.

Kratom plants contain a whole set of active substances so that the immediate effects can be variable. In general, one can get two types of effects: stimulation and relaxation. Very roughly, it mostly depends on the dose that the user consumes.
The onset of effects depends on the method of preparation and consumption. It can start around 10-20 minutes after ingestion.

A small dose contains between one to five gram of Kratom. The effects last up to 90 minutes and are predominantly stimulant-like. Some people compare the sensations to those after using amphetamine, but less intense. They include:

Moderate and High Doses of Kratom

We are talking about doses between 5-15 grams of Kratom. These effects last much longer, namely several hours. The exact duration depends on the precise dosage, the consumer’s weight, and other factors.
People experience sensations similar to effects of opioid substances, although less intense:

Because there is no research available about Kratom, we know rather little about possible Kratom overdoses. Kratom users usually do not go above 15 g, because the effects are not pleasant anymore. If an “overdose” happens, it is usually because of errors.
People that went through that, report sensations resembling high doses of opioids. What they experience is extreme sedation and in some cases even a loss of consciousness.

Kratom is popular for its benefits. Most people use it as an alternative to more rough and addictive medication. They want to avoid the nasty negative consequences, including a wide range of physical and mental annoyances as well as well addiction.

Some people think that Kratom is completely safe because it is a natural remedy. That is a common false belief. Every substance, synthetic or natural, can have benefits and has side effects and that includes Kratom. Except Kratom legal status varies between states and counties, it is also known to cause an addiction and use Kratom can result in numerous side effects.

What are the effects of kratom in high dosages?

In high dosages, kratom can produce effects such as:
• Constriction of pupils
• Facial flushing
• Constipation
• Muscle tremors or loss of motor coordination
• Sweating
• Itching
• Dizziness
• Nausea and vomiting
Low Doses of Kratom
Doses between 1-5 gram used irregularly and occasionally should not cause any adverse consequences. Many people stick to dosages in that range. They benefit from all the advantages of the herbal remedy without risking any danger.

What are the effects of kratom in low dosages?

In low dosages, kratom may produce side effects such as:
• Headaches
• Nausea
• Constipation
• Dizziness combined with involuntary shaking of the eyes (aka “the wobbles”)
Moderate Doses of Kratom
Doses of 5-10 gram can cause:

These sensations are inconvenient, but should not present any harm.
High Doses of Kratom
Doses up to 15 gram can already be dangerous if consumed too frequently. Here is what you can expose yourself to:

A dose of over 15 g is extremely high and potentially very dangerous. Currently, we have little information available on statistics related to Kratom use. However, it seems that users rarely experience extreme toxic consequences of Kratom abuse. In the rare cases, where Kratom consumers experience seizures, they exceeded a dose of 15 g.

In other cases, it turned out that Kratom powder was cut with other toxic substances. A good example for that was the case with the “Krypton” product. It is illegal in Sweden after causing death to uninformed consumers.

Among the rare studies done on Kratom, there is some information about chronic Kratom users of high doses in Thailand. They report some surprising and unusual long-term effects induced by that substance over time:

There is no evidence that long-term consumption damages internal organs.

Signs Of Addiction To Kratom

It appears that regular use of high doses of Kratom can induce physical dependence and even addiction. There are some chemicals in Kratom that can be mistaken by the brain for opiate signaling. That makes sense, in that Kratom is sometimes used to mitigate opioid withdrawal symptoms. Because of that, many medical professionals think, that Kratom itself can also have addictive potential.

Long-term users that are physically dependent on Kratom typically show similar withdrawal effects when they have no access to the substance. Some of the withdrawal symptoms include:

Though not much research has been done on this topic, kratom can be dangerous in high dosages. When dosages higher than 15 grams are consumed, the user may experience seizures, or even death. However, even in lower dosages, kratom may have dangerous interactions with other medications. It is also possible for someone to develop an addiction to kratom.

What Else One Needs to Know About Kratom Effects

The exact intensity of Kratom effects is not possible to report, because it depends on several variables in addition to the dose and frequency of use:

Because there is not much scientific evidence is very sparse on that topic, it is not easy to answer that question. Most of the information about its effects comes from users and medical professionals. But there are not officially reported clinical trials.
From what we know, little (up to five gram) and infrequent doses seem to be harmless. On the other hand, the larger and more frequent the intake, the more harm it can potentially induce.
Chemicals investigations show that Kratom contains over 20 biologically active substances.

For that reason, Kratom is currently illegal in Thailand, Myanmar, and Malaysia. And that is despite that historical use in traditional medicine. Not in the U.S. it is classified as a controlled substance, on the other hand it does not have the approval of the Food and Drug Administration as well.

Addiction Resource » Addictive Substances: The Anatomy of Drug Addiction » Kratom Addiction, Its Effects And Treatment » Side Effects of Kratom Use: What Are They?