Addiction Resource » Drugs of Abuse » Focalin » How Long Does Focalin Stay In The System?

How Long Does Focalin Stay In Your System? Half-Life & More

Dexmethylphenidate, under the brand name Focalin, is one of the stimulant medications that is used to treat Attention Deficit Hyperactivity Disorder or ADHD. It comes in a plain and extended release form (Focalin and Focalin XR). In 2018, the estimated number of patients in the United States who were under treatment with this medicine was around 650,000. It is noteworthy that Dexmethylphenidate is a central nervous stimulant, which has a high potential for abuse, and it is classified as a Schedule II controlled substance by the Drug Enforcement Administration. For this reason, it is important to understand why being familiar with Focalin half-life is a must, especially because a Focalin drug test can be requested for employment.

In this article, information about Focalin half-life, mechanism of action, Focalin and Focalin XR duration of effects, how long does Focalin stay in your system, and what are the factors that affect the time it stays in the body, Focalin drug test, and how to remove it from the body safely will be given.

How Does Dexmethylphenidate Work?

It is chemically similar compared to the first line ADHD medication, Methylphenidate and its labeled indication is for the treatment of Attention Deficit Hyperactivity Disorder (ADHD) in children (≥6 years), adolescents, and adults.

Furthermore, although exact information on this drug’s mechanism of action and how taking Dexmethylphenidate help treat ADHD is unknown, it is surmised that it increases the availability of Dopamine and Norepinephrine in the Central Nervous System by blocking their neuronal reuptake and increasing their release in extraneuronal spaces. These two monoamines are thought to be deficient in ADHD, and by increasing their availability Dexmethylphenidate reduces symptoms of hyperactivity, impulsivity, and/or inattention.

Focalin half-life may vary depending on the type used. For most people, the immediate-release version has a mean plasma elimination half-life of approximately 2.2 hours while Focalin XR half-life is a little longer, ranging between 5-7 hours. One main reason why Focalin XR half-life differs from the other form is that the time when they exert their effects differ as well. Focalin XR duration of effects stay different from the plain version of the medication. More information about these differences will be explained in the next sections.

Moreover, according to the FDA, it is important to know that the excretion and metabolism of a patient also plays a big role when it comes to the Focalin XR half-life and Dexmethylphenidate plain half-life, and children tend to have slightly shorter half-lives compared to adult patients. Also, age, dose, and drug interactions can impact the Focalin half-life. 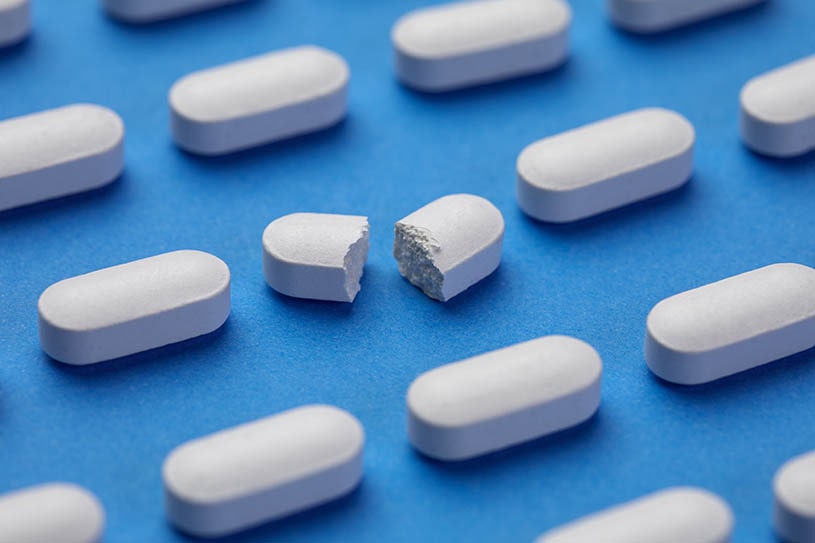 How Long Does Focalin XR Last?

For This Reason, The Time the Extended Release Form Stays In the Urine, Blood, Hair, and Saliva Differs As Well. Below Is Information About This:

Knowing the information above is important especially when a person who is under treatment with Dexmethylphenidate is required to do some drug and laboratory tests.

Aside from this, understanding the facts above is a great way for every patient or parent of children with Attention Deficit Hyperactivity Disorder to learn about what happens to the drug after ingestion and how long its effect can be seen.

How Long Does Focalin Last?

Focalin, also known as the immediate-release version, is quickly absorbed in the body after administration. So, how long does Focalin last? After 1 to 1.5 hours, this drug will have its maximum concentration in the blood and per dose, its effects will last for about 4 hours.

The Information About How Long It Stays In the Urine, Blood, Hair, and Saliva Is As Follows:

The immediate-release version of Dexmethylphenidate is clearly different from the extended release version. It is important to take note of the form of the drug that is being used in order to understand more about how long their effects will last and how long the drug will stay in the system. 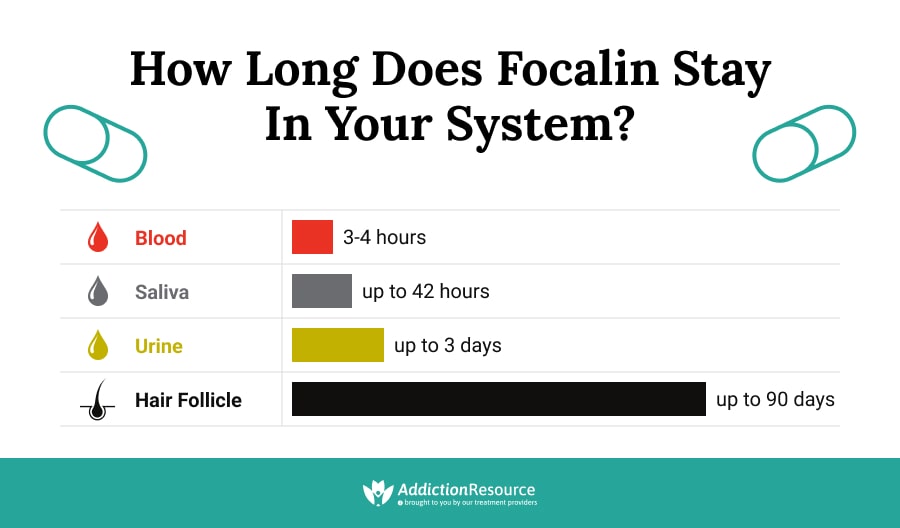 As a Schedule II controlled substance like Methylphenidate, Dexmethylphenidate is accepted for medical use in the United States despite having a high potential for dependence and abuse. A standard drug panel is not likely to show the presence of Dexmethylphenidate in the system, especially because the drug has a short half-life. However, there is still a possibility for a drug test to be positive, depending on the sensitivity of the test. Also, one reason why false-positive drug results occur is that ADHD medications including Dexmethylphenidate and its counterpart with shorter duration, Methylphenidate, are prescription versions of amphetamines.

If a patient received a positive result in a Focalin drug test, different metrics will be used to verify the positive result. If it is a false-positive, using the different metrics will show that the result is not amphetamine or methamphetamine. Moreover, a 10-panel drug test screens for the most frequently misused prescription drugs in the US, which includes Dexmethylphenidate.

So, if a patient is taking any medications, it is recommended to list them on the intake form before proceeding to the drug screening. 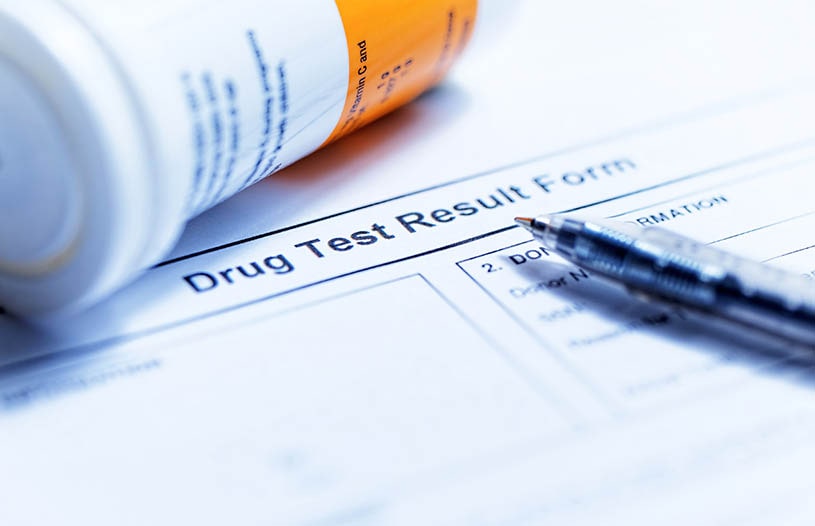 Factors That Affect How Long Dexmethylphenidate Stays in the Body

The time for the two forms of Dexmethylphenidate to stay in the system differs and the time they last in the body is affected by different factors aside from the metabolism of a patient.

Below Is Information About the Individual Factors That Can Impact the Time for This Drug to Stay In the System:

Knowing the factors that affect how long this medicine or any other medications alternative to Focalin stay in the system is very important during drug treatment. Avoiding foods that can alter the effects of the medication will help a patient optimize the use of the drug.

Additionally, knowing the patient’s health condition and individual factors will also help the medical health professionals in the proper dosing of the drug.

How to Remove Dexmethylphenidate From the System Safely

People who take the right dose of Dexmethylphenidate are not likely to suffer from Dexmethylphenidate’s emotional side effects and addiction, or discomforting Focalin withdrawal, hence should not be concerned about removing Dexmethylphenidate faster from the system. However, those who present with signs and symptoms of CNS overstimulation due to excessive sympathomimetic effects should take measures to speed up metabolism and excretion of the medication faster. Moreover, the goal is not only faster removal but is also about safe removal of the drug from the system.

Below Are Some Tips on How to Safely Remove This Medicine From the Body:

People abusing this or any other stimulant medications may require specific measures to flush the medication from the body. One of the safest options is the detoxification procedure in the substance addiction recovery center. The qualified medical specialists will work out the treatment plan for drug abuse that will meet all the individual requirements of each patient.