The most popular cold and cough medicines in the USA contain dextromethorphan, such as Delsym DXM. However, many may seek cold medicines without dextromethorphan due to doubts about its safety, adverse effects that may appear, it’s price, the possibility of allergic reactions, or simply because prefer natural remedies.
Some natural home remedies also have beneficial effects on relieving cough and cold as Dextromethorphan. These natural cough medicines can be used for all ages of the family with safety and efficacy. Also, there are many DXM analogs exist that have the same or very similar medical properties as DXM, like guaifenesin and diphenhydramine.

DXM And Other Cough Medicines Without Dextromethorphan: What Works Better

There are cough medicines without dextromethorphan such as Guaifenesin, Diphenhydramine, Benzonatate, Codeine, and Levodropropizine available on the market. These medicines can be used alone or in combination with DXM. Do drugs without dextromethorphan works better to treat coughing symptoms, and what are the similarities and differences between these medications and DXM?

Guaifenesin is an expectorant and available under the brand names “Robitussin”, “Guiatuss”. It works by thinning mucus in the airways and making breathing easier. Both Dextromethorphan and Guaifenesin are OTC medicines. Guaifenesin is available as a tablet or a liquid while DXM may also be available in the form of DXM gel caps or lozenges. Both can be used as a separate substance or in combination with other cold medication. Both are not recommended for the treatment of cough due to smoking, chronic bronchitis, and emphysema. Vomiting, dizziness, rash, stomach pain, drowsiness, headache, and decreased levels of serum uric acid are the side effects of the two medicines. Dry coughing is better treated with Dextromethorphan, while the Guaifenesin is better as an expectorant.

Diphenhydramine is an antihistamine drug, classified as an antitussive. This drug may be found alone under the brand “Benadryl” or in combination with other OTC cold medicines. It reduces the effects of histamine in the body, such as sneezing, runny, nose itching, coughing, and watery nose. That’s why it is recommended for patients suffering from pneumonia and acute asthma to use diphenhydramine, not the dextromethorphan. 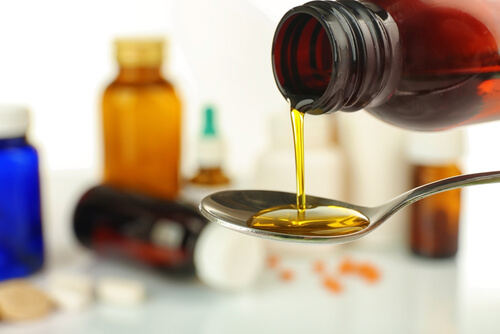 Both medications cause side effects such as headache, dizziness, and drowsiness. Dry mouth and difficulty urination are common adverse effects of Diphenhydramine. But it doesn’t cause constipation and diarrhea, which are common side effects of dextromethorphan.

Benzonatate is a non-narcotic antitussive, as well, as Dextromethorphan is. It is available by prescription under the brand “Tessalon” or in combination with other cold medicines. This cough suppressant without dextromethorphan works peripherally in the lung by reducing the reflux that causes the coughing desire. In contrast, the DXM molecule works centrally. Some side effects of Benzonatate are similar to those of DXM such as dizziness, headache, constipation, and confusion. This analog is an excellent antitussive medication, but not the best for coughing with mucus. These medicines are an effective combination of elimination congestion with mucus.

Codeine differs from DXM drug type as it is a narcotic drug available in some OTC cough medicines in low doses. This analog is used to relieve mild to moderate pain centrally, but Dextromethorphan does not affect pain relief. Long term use of codeine can cause depression, while the DXM antidepressant properties are often used to treat different types of depressive disorders.
Both medicines work centrally and have addictive properties. Dextromethorphan tolerance at low dose rarely appears, what can not be said about codeine. That’s why long term use of DXM together with codeine, as well as violation DXM dosage guide, may also cause tolerance.

Since both drugs belong to the opioid class, detection of codeine and DXM in drug test is possible and very common, regardless of whether they are taken together or separately.

According to FDA recommendations, codeine as antitussive not given for children below 12 years and Dextromethorphan not provided for children below 4 years. This is because the adverse reactions can way outweigh any potential upsides from both medications. According to a study published in the Journal of International Medical Research, both medications effectively reduce cough frequency, but DXM do it more intensity. Comparing codeine vs. DXM, it is better to use DXM instead of codeine for dry cough.

Levodropropizine is a non-opioid, an antitussive drug, which is available as a separate under the brand “Rapitus” or in combination with other cold medicines. This analog acts peripherally by interfering with the sensory neuropeptide system involved in the cough reflex. Comparing levodropropizine vs. dextromethorphan adverse reactions, they are similar in both drugs: nausea, vomiting, stomach pain, diarrhea, drowsiness, dizziness, and headache.

The efficacy of Levodropropizine, as an analog, in reducing both frequency and intensity of coughing, is higher than that of DXM.

Some people choose natural herbs and remedies for the treatment of many different diseases. Especially in simple cases, that can have therapeutic options away from medicines and surgeries, like coughing. So, does DXM natural product analogs have more benefits than dextromethorphan?

Honey: Does It Have A Better Effect On Cough Than DXM?

Drinking tea or warm water with lemon, mixed with honey, is one of the recipes used since ancient times to relieve a sore throat. It was found that the honey alone may also be useful as an antitussive. According to the Clinical Trial on the Effect of Honey and Dextromethorphan on Nocturnal Cough on children with an upper respiratory infection, drank about two teaspoons of honey at bedtime, honey reduced nighttime coughing and improved sleep ability.

This natural analog appeared to resemble the effect of dextromethorphan as an antitussive.

For children aged 1 year and over, 2 to 5 ml of honey can be used as needed, especially when sleeping. Using honey, as well as dextromethorphan during pregnancy, is safe, but when it comes to comparing honey vs. DXM, the honey is more useful for the baby.

Anti-inflammatory Properties Of Ginger For Dry Or Asthmatic Coughing

Ginger has antioxidant and anti-inflammatory effects that purify the throat and respiratory tract from toxins. Ginger also suppresses respiratory sensitivity because of its anti-asthmatic properties. Ginger work depends on the relaxation of the membranes lining the airways of the lung and thus reduce the coughing. It is recommended to use ginger as an antitussive, as it acts peripherally without the central side effects caused by DXM. 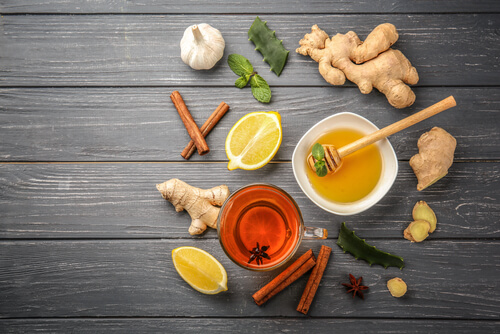 Bromelain is an enzyme found in pineapple fruit. This natural analog has anti-inflammatory properties and decreases mucus in the throat. It can be obtained by eating a slice of pineapple or drinking a cup of 100 ml of pineapple juice three times a day and can be sold in the form of dietary supplements. However, bromelain is an expectorant, unlike the DXM.

Peppermint contains menthol, which relieves sore throat and congestion. It can be used by drinking it as a juice or adding to hot water and inhaled.

Thyme relieves cough as it contains flavonoid, which works on the expansion of pulmonary muscles and also reduces Inflammation.

Marshmallow treats sore throat and cough and can be obtained either as herb or capsules. Slippery elm contains a gel that treats cough and sore throat, used by adding it to a cup of hot water. It is better to use these natural herbs for cold than using DXM because of their effectiveness and safety.

Cough Drops And Other Hard Candies For Dry Coughing

Any hard candies can treat dry cough and sore throat because more saliva is secreted when treated with it, leading to moisturizing the throat.

Hard candies and DXM throat lozenges are preferred for a nighttime dry cough. But it should not be taken too much as it may cause some adverse effects, especially for children.

What Is The Best DXM Analog?

There are many DXM analogs with different efficacy and safety. Some DXM analogs act centrally as codeine, others act peripherally such as diphenhydramine, guaifenesin, benzonatate, and levodropropizine. Be sure to consult a therapist before replacing DXM with analogs, as this may adversely affect health due to the features of the organisms. The doctor may also suggest which analog will have more useful qualities for an individual.

It is recommended to use a cough syrup without dextromethorphan such as Levodropropizine as antitussive and guaifenesin as an expectorant. Using cold medicine without dextromethorphan such as diphenhydramine is a good choice to avoid stomach upset. It is better to use honey as a natural DXM analog and hard candies as a substitute for DXM lozenges for dry coughing. These DXM analogs can help to avoid the risk of DXM addiction that needs drug addiction treatment options. Anyone who misuses DXM should seek drug rehabilitation facilities to assist in the recovery process.