Buspirone And Pregnancy: Is It Safe To Take Buspar While Pregnant?

Buspar, the trade name of Buspirone medicine is considered as one of the relatively safe anxiolytic drugs, with a comparatively small list of contraindications. It’s commonly prescribed for controlling anxiety, but in some cases, it can be unsafe. It’s especially true about taking Buspar during pregnancy, as this drug may come with some Buspar side effects. While the use of benzodiazepines and anti-anxiety medications such as Buspirone has long been a controversial topic, a recent study has found that Buspirone during pregnancy is generally safe and is not linked to congenital malformations. However, careful medical monitoring during Buspirone pregnancy is crucial for women with a previous history of anxiety disorders, as it may help to control anxiety symptoms more efficiently.

So, does the combination of Buspar and pregnancy come with risks in fetal or infant development? Can you take Buspar while pregnant? And what could happen if you take Buspar during pregnancy or while breastfeeding? Follow the article to find answers to the commonly asked questions regarding the safety of Buspar in pregnancy, and the potential interactions of Buspirone and pregnancy.

Anxiety During Pregnancy: How Common It Is

Pregnancy is a very special period in women’s lives, which is commonly followed by increased anxiety levels. A study called Yale Pink and Blue, which had almost 3,000 women, found that 9.5% of the women suffered from generalized anxiety disorder (GAD) during pregnancy. The number of participants that experienced and reported anxiety symptoms was highest in the first trimester of pregnancy. The study also found that anxiety symptoms decreased across pregnancy. Another study that aimed to get an estimate of the prevalence of anxiety symptoms and disorders during and after pregnancy, on the other hand, found that pregnant women had a slightly higher susceptibility of 3.1% to anxiety symptoms and disorders than postpartum women. Data from the U.S. National Library of Medicine – National Institutes of Health suggest that anxiety affects 1 in 5 pregnant women. Prenatal anxiety has also been found to be a strong predictor of postpartum depression.

Various studies state that women who have shown significant symptoms of anxiety during pregnancy are under the risk of complications, including pre-eclampsia, preterm labor, and low birth weight infants. Thankfully, there are several available treatments that can help with managing anxiety and depression during pregnancy, which include medications.

Can You Take Buspar While Pregnant?

Since pregnancy puts women at a higher risk of experiencing anxiety symptoms, a lot of women are curious if it is safe to take anxiolytics such as Buspirone during pregnancy. Concerns are generally focused on the effects of Buspar during pregnancy, particularly regarding its safety for fetal development.

When it comes to taking medications to reduce anxiety during pregnancy, SSRIs or selective serotonin reuptake inhibitors are one of the most commonly prescribed drugs for the management of anxiety and/or depression during and after pregnancy. Recent studies involving benzodiazepine use (such as alprazolam (Xanax) and lorazepam (Ativan)) during pregnancy also suggest that they are safe to take while pregnant if not combined with antidepressants. The combination of Buspar and pregnancy is also relatively safe.

When comparing this drug with other drugs used for anxiety management, it is vital to assess the risk for the future baby. When comparing Lexapro and Buspar as possible treatment options, for example, one must remember that both medications were not extensively studied on this subject matter. Self-medication during pregnancy is especially dangerous since it can also harm the fetus. If there’s an arising issue, it’s best to report it to the doctor to receive proper treatment for an underlying problem. 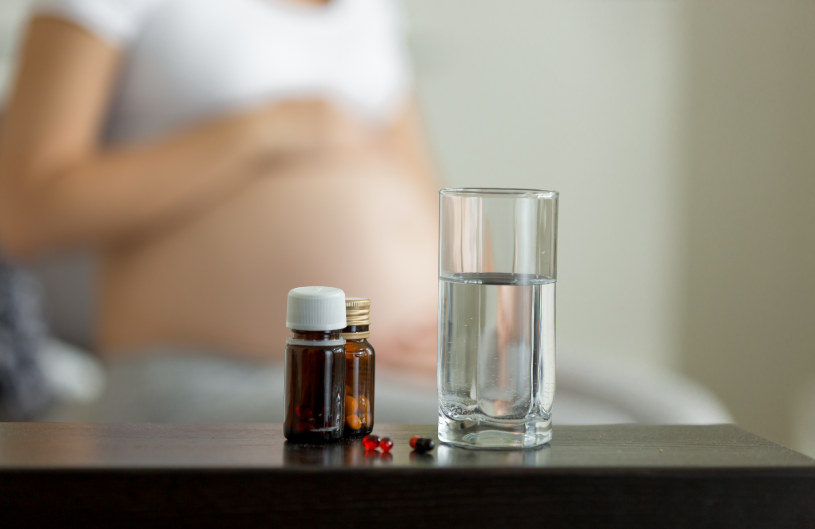 According to the FDA, the Buspirone pregnancy category is B, so that means that no fetal harm or fertility impairment has been observed during reproductional studies. However, these studies have been performed in rats and rabbits, and there still isn’t an adequate, reliable, and well-controlled study in humans. Although animal reproductive studies can not always predict the influence on the human reproduction process, the Federal Drug Agency recommends using Buspar in pregnancy only in case of clear need.

Also, how long does it take for Buspar to work? It usually takes up to 60 minutes before the drug kicks in. Always consult with the doctor regarding the use of any anti-anxiety medication. Only a licensed professional has the right to assign and substitute the medication.

Buspar Side Effects During Pregnancy

Adverse effects of Buspar on labor and delivery have not been noted in rats. However, the possibility of its presence in the human body is still unknown. So, can you take Buspar while pregnant? Is the combination of Buspirone and pregnancy safe? There is no clear answer to this question because of the lack of research data.

But Side Effects of Buspar During Pregnancy May Include the Following:

Pregnancy often comes with a rollercoaster of emotions, those that may catch women off guard. This may be hard for pregnant women as they may experience mood changes, fatigue, and anxiety. Although these are normal, dealing with them can be difficult and may require further attention from a health expert. Anxiety may also present itself as physical symptoms that may be frightening, such as panic attacks, difficulty breathing, and a fast heartbeat, among others. Buspar sexual adverse reactions are also quite common.

During the first months of life, a child receives most of the nutrients from breast milk. At the same time, harmful substances also can get to the growing organism through it, the same is also true for medications. So, can breastfeeding while on Buspirone have an impact on the infant? The National Center for biotechnology information states that maternal doses of Buspirone up to 45 mg daily can produce low levels in milk, but there is limited information about the levels and their impact.

Data about long-term Buspirone use while breastfeeding or using smaller doses, like Buspar 10mg, is also unavailable. Based on this, it is recommended that patients and doctors consider using other drugs, especially while breastfeeding newborns, an infant with low birth weight, or a prematurely born child. Meanwhile, it has been found that Buspar increases serum prolactin. A pregnant woman who took both venlafaxine and Buspar was reported to have an abnormal production of milk. However, the abnormal production of milk (also called galactorrhea) persisted after buspirone was discontinued, which suggests that the drug may not affect the woman’s ability to breastfeed.

Some of the risks associated with untreated anxiety during pregnancy are low birth weight, preterm birth, and earlier gestational age. The baby could also have a smaller head circumference, which could then affect the size of their brain.

Predicting the impact Buspar may have on a newborn baby is difficult as there is very little data about the drug’s adverse effects on people younger than 18 years. One can’t also discount the fact that unpredictable results may be caused by substance abuse, intentional or accidental overdose, and mixing Buspar with other substances, like taking Buspirone and weed. Substance abuse is dangerous for both mother and child. It is imperative to prevent the use of any substances that may affect the health and life of the future baby.

In the study mentioned above, there has been a report of a 3-week-old breastfed infant (whose mother was taking 45 mg of Buspirone per day as well as carbamazepine and fluoxetine) suffering from potential drug-induced seizure-like activity and cyanosis, it was suggested that Buspirone was not the drug that caused it, and that it was most likely fluoxetine. An 11-week-old infant whose mother was taking 10mg of Buspirone and 300 mg of venlafaxine daily, on the other hand, experienced no adverse reactions – supporting the theory that it was fluoxetine that caused the seizure-like activity and cyanosis in the 3-week-old infant.

While Buspirone is considered to be relatively safe for the adult patient, a lot of its aspects are still unknown. While anxiety is a common satellite of pregnancy, childbirth, and nursing of the child at home, it’s important to consult with a healthcare professional about the appropriate choice of anxiolytic, which will not impose a risk upon the health of the mother and child. Buspirone side effects weight gain may also cause anxiety in pregnant women. It must be noted, too, that untreated anxiety during pregnancy may negatively affect not only the fetus but also the pregnant woman carrying them.

Aside from medications, there are other treatments for anxiety during pregnancy to help affected pregnant women feel better, such as cognitive-behavioral therapy or CBT. This particular therapy’s main focus includes challenging and managing dysfunctional thoughts, actions, and emotions.

There Are Also Activities and Practices That One May Do To Help Ease Their Anxiety Such as the Following:

If one becomes dependent or addicted to Buspar, it is time to seek professional help. Specialists at the outpatient and inpatient drug rehabs will provide all the necessary treatment (and information about them) needed to get out of the addiction loop. A patient will be offered a set of different treatment programs and will also be offered a range of specialized aftercare programs for the former addicts.