How Long Does Ritalin Last in Your System? Concerta Drug Test

Methylphenidate, also known as Ritalin or Concerta, is a central nervous system stimulant used in the treatment of narcolepsy and attention deficit hyperactivity disorder.

The drug improves focus and attention in patients with ADHD. Because Ritalin has a short half-life, it can be eliminated from the body in about 16 hours. However, this period will not be the same for everyone, as individual factors can affect the elimination.

So, how long does Ritalin stay in your system? How does it work and produce its effects? And what should you know about Concerta drug testing? Read on to find out.

How Does Ritalin Work?

Ritalin is a stimulant medication that contains methylphenidate. The methylphenidate mechanism of action is that of a catecholamine reuptake inhibitor. It prevents noradrenaline and dopamine from being reabsorbed by brain cells. As a result, it causes extracellular noradrenaline and dopamine levels within the brain to rise. It thereby enhances the activity of these areas, increasing neurophysiological arousal and focus in individuals with attention deficit hyperactivity disorder (ADHD). Therefore the methylphenidate mechanism of action justifies its use in the treatment of the condition. 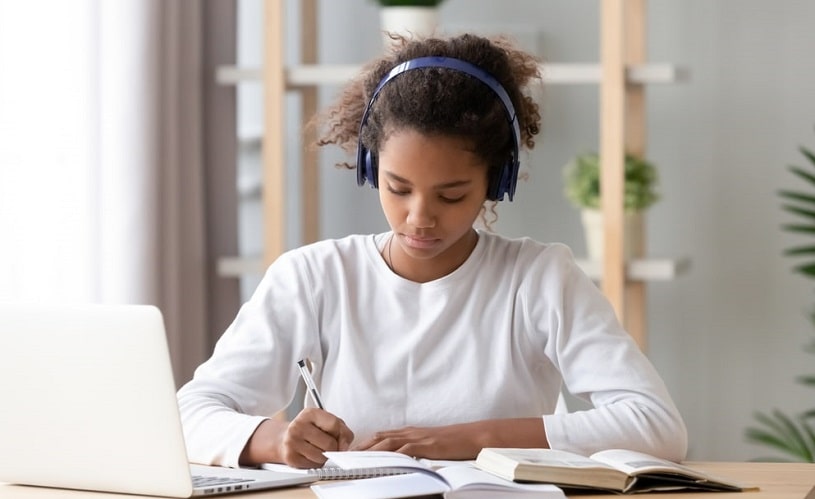 Because of the methylphenidate mechanism of action, which has stimulant and attention focusing properties, this makes it useful in treating ADHD. However, it also means the medication has a tendency to be abused and can therefore lead to an addiction disorder. Discontinuing the stimulant after prolonged use can make users experience withdrawal symptoms.

How Long Do the Effects Last?

The length of time the effects last in the body depends on several factors, including the formulation of the medication. There are two main forms of the drug, extended-release and immediate-release pills.

Methylphenidate has a half-life of two to three hours, which affects the length of time the drug lasts in the body and how long its effects last.

Approximately 50% of methylphenidate leaves the system within 2 to 3 hours on average.

That means the drug will take 11 to 15.6 hours to completely exit the system. In other words, all active ingredients will be excreted in less than 24 hours.

How Long Does Ritalin Stay in Your System?

How long does Ritalin last in your body? The detection time of Ritalin depends on several factors. Some of these factors include the tissue sample being tested, the length of time the individual takes the drug, and the dose taken. In a drug screen panel for stimulant medications such as amphetamines, methylphenidate will show positive. Methylphenidate isn’t usually detectable for a long time, but it can be visible in a system for up to ninety days when a hair test is involved. This is because the drug has different detection windows for blood, saliva, urine, and hair.

How Long Does Ritalin Stay in Your Urine?

Urine tests are usually valid for up to four days after use, depending on which substance is taken, as well as the Ritalin half-life. Ritalin, however, can be detected in urine for 1 to 2 days.

How Long Does Ritalin Stay in Your Blood?

The effectiveness of blood tests will range based on the half-life. However, the amount of time that methylphenidate will stay in the body system is unknown, as there is no data currently available regarding the detection of methylphenidate in blood tests. But generally, substances can be traced in one’s blood for 1 to 3 days.

How Long Does Ritalin Stay in Your Saliva?

The effectiveness of saliva tests ranges depending on the substance, but use can mostly be identified between 12 hours and three days. Testing for methylphenidate will be most useful between one and two days after use.

How Long Does Ritalin Stay in Your Hair?

Methylphenidate can be detected for up to 3 months with a hair follicle drug test but will most probably only show up after one week after use.

One important thing to keep in mind is that our bodies work differently. Hence, all human bodies can’t take the same amount of time for excreting the Ritalin metabolites. 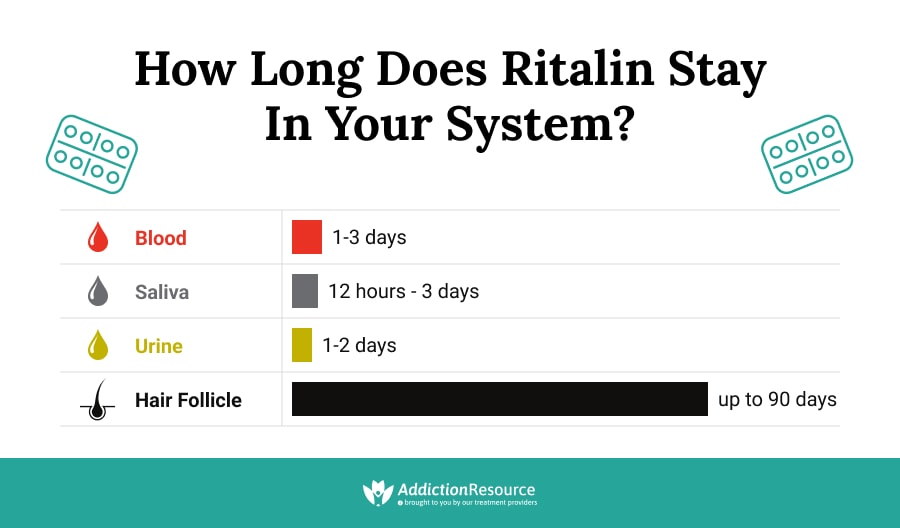 Factors That Influence How Long Ritalin Stays in the Body

The Ritalin half-life is about 2-3 hours. However, multiple factors can affect the length of time the medication stays in the system. Some of these cannot be modified, such as your age and genetics. On the other hand, some factors, such as the dose, are modifiable.

The Major Ones Include:

According to research, genetics could influence the clearance time of methylphenidate. For example, individuals whose genes have an increased level of carboxylesterase, an enzyme that quickens chemical reactions, will excrete the drug quicker than those who don’t.

Concerta enhances the MBR (Basal Metabolic Rate) of an individual. People who have a faster BMR excrete the medication faster than those who have lower BMR.

How the Drug Was Taken

Some users choose to dissolve methylphenidate and administer it intravenously. It has a much faster effect and will most probably also be excreted by the body quicker than with the traditional manner of administering methylphenidate. This method of ingestion can also make methylphenidate side effects more severe.

How Often the Drug Was Taken

If a person takes methylphenidate often, the user builds up a tolerance towards it and requires more to achieve the desired effect, which takes longer to metabolize.

Men’s and women’s profiles of liver enzymes differ, which means that methylphenidate metabolizes at different paces in each gender.

The kidneys need water to perform their function, so the less hydrated they are, the less effective they will do their job. So staying well hydrated will help clear the medication faster.

Physical activity speeds up the metabolism, and this will also help clear the medication faster. So a physically active methylphenidate user will excrete the drug more quickly than one who isn’t active at all.

Certain health conditions affect the kidneys, liver, brain, and heart, which can all affect how a user metabolizes methylphenidate.

Based on the factors above, it is clear that each will process methylphenidate differently. The vast majority (about 80%) of methylphenidate’s metabolism will be hepatic, no matter the administration route. Health conditions affecting the liver will slow the metabolic rate to different extents, increasing the amount of time that methylphenidate will remain in a system.

Excreting Ritalin From The System Faster

So, if someone wonders the length of time Ritalin stays in the system, the average answer is 48 hours. But in addition to the individual factors, there are some ways to speed up the process.

The best of all tips would be to stop taking the drug altogether. Each time one ingests another dose, the number of metabolites increases. Therefore, if a patient wants to make sure all of the substance goes out of the system, it is recommended to stop taking it. 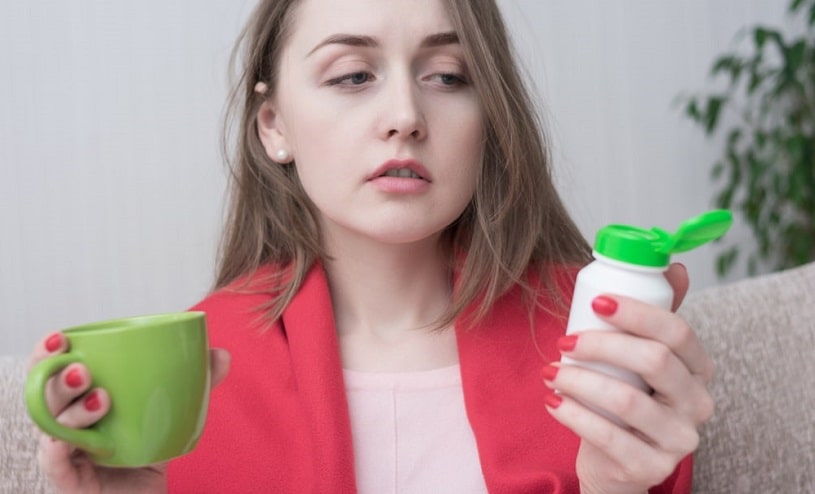 Those patients who still require treatment for ADHD or narcolepsy can switch to the alternative medication. Note that only a doctor can make such a decision. One alternative medication is Adderall, which contains amphetamines. In Adderall vs. Ritalin comparison it was found that they have similar results in treating ADHD.

Dealing With a Methylphenidate Addiction

From the above, Ritalin can remain within the body for several days. These values may be even higher in chronic abusers of the stimulant. Therefore a Ritalin detox may take several days in chronic abusers of the drug. That’s why it is best to seek professional help from a drug rehabilitation center that can provide you with the medical expertise, medications, and support you need to rid your body of the drug safely. They also provide you with treatment options to help you deal with methylphenidate addiction and withdrawal symptoms and finally overcome your addiction.