Temazepam Half-Life: How Long Does Restoril Stay in Your System?

Restoril or Temazepam is one of the most popular benzodiazepine drugs that can be used for the rehab of short-term insomnia and other mood disorders to optimize health. In this article, we will be looking into how long does Restoril stay in your system and what are factors could affect this.

Temazepam, more commonly known as Restoril, is a benzodiazepine derivative falling under the 3-hydroxy benzodiazepine family. Benzodiazepines are a family of depressants that target the central nervous system by enhancing the brain’s response to gamma-aminobutyric acid (GABA) that relaxes the brain and keeps it healthy. Benzodiazepines, just like Restoril, are treating various mood disorders.

The medication is particularly famous for its fast-acting ability to manage short-term insomnia, or the disorder characterized by having difficulties falling asleep and staying asleep for regular periods. In some cases, it can also be used for severe anxiety and panic attacks treatment.

The effects of this particular medication usually leave the body within one to two days. Although, it can be detected in hair for several months, depending on dosage and frequency of use.

But that’s just the tip of the iceberg when it comes to this specific benzodiazepine. And the answer to how long does Restoril stay in your system depends on several factors that we’ll explore shortly. 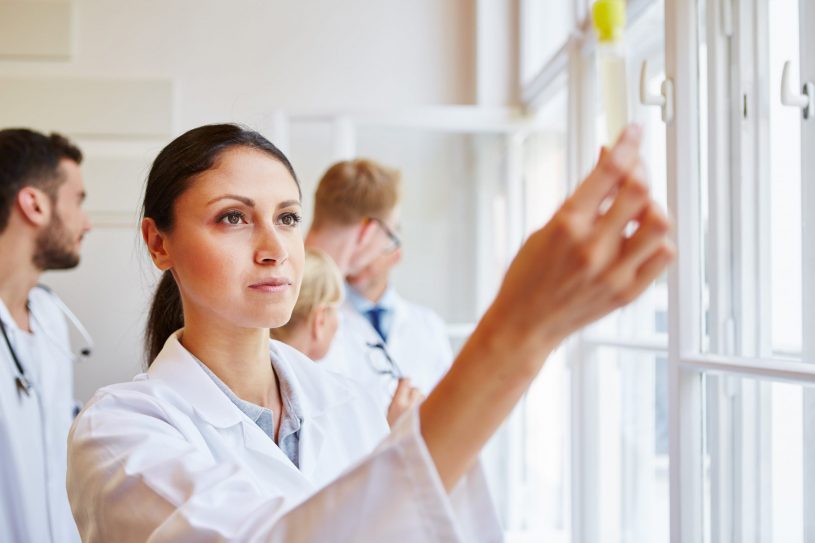 Temazepam Half-Life: How is Restoril Metabolized?

Most benzodiazepines take the same path of metabolism. These medicines usually have a half-life from less than four hours to as much as 20 hours. Half-life refers to the duration it takes for specific drugs to be metabolized by as much as 50% by the body.

According to the US Food and Drug Administration, the half-life of Temazepam is approximately within 8 to 20 hours (all other parameters being standard). This means that with the regular and continuous intake of temazepam for long periods of time, the metabolic process of these drugs will slow down. Likewise, taking medicine at a high dosage will have the same impact, making it difficult to determine how long Temazepam stays within your system.

Temazepam is a fast-acting medication. Upon taking a 30mg capsule, it can kick into action within 10 to 20 minutes and, on average, reaches its peak levels after an hour and a half. From there, the metabolism of Restoril starts in two phases spreading across the short phase and the long period.

The liver is the principal organ that metabolizes drugs like Temazepam. From there, 80% to 90% of the dose appears in one’s urine in a healthy body after taking medicine.

The Duration of Temazepam’s Effects

Restoril falls under the classification of short to intermediate-acting benzodiazepines. The nature of benzodiazepines actively contributes to the duration of the efficacy of these drugs in one’s body.

Short to intermediate-acting benzos take between 5-24 hours to get to 50% or less in our system upon taking. But because of the varying half-life of Temazepam among patients, the question as to how long does Restoril stay in your system varies also, from person to person. On average, patients can feel the effects of the medication within 20 minutes after intake. This usually peaks at 90 minutes. Afterward, the drug starts to get broken down by the liver.

Just like any kind of drug, Temazepam can lead to harmful results when misused. It can be highly addictive and harmful to one’s health when abused. Hence, it is the standard practice that Restoril can be prescribed by a licensed physician. The recommended dose must be followed at all times. Drug Bank Online says using temazepam should not exceed 7 to 10 consecutive days.

Factors Deciding How Long Restoril Stay in Your System

There is no information on a scientifically defined period for which Restoril should stay in your system. But several factors actively contribute to how long it lasts in one’s body. These include the following:

One’s age can also be a factor in determining the duration of the efficacy of the recovery. Since people have slower metabolisms as they age, it would take longer for the drug to be out of their system than a younger patient.

Being overweight increases the half-life of Temazepam, causing it to stay within the body a lot longer.

It is a fundamental law that an increased quantity during the policy of Restoril would also spell a more extended duration before the drug leaves the system. Also connected to the duration is how often one takes the drug. This is why a small one-time dosage of the medication at a time could readily leave the system when compared to long-term sustained usage.

It‘s hard to test for the abuse or addiction of Restoril in a drug test, majorly for the fact that the medication, just like diazepam or other benzodiazepines, would be taking the same pathways when they are getting metabolized.

A lot of the metabolic procedure of this specific benzo actively involves the liver. Thus we see that when one has a liver condition, Restoril will stay longer in one’s body. Other health conditions could also be a factor when it comes to this medication’s absorption and duration in one’s body because it affects metabolism. Some of these conditions include kidney dysfunction and advanced heart failure.

Use of Other Drugs

Another factor that may affect the duration of the efficacy of the drug in one’s system can also include the interaction of other drugs in conjunction with Restoril. Ingesting other medications along with temazepam can directly affect how long it lasts in your system. For example, the use of Cephalexin or an antibiotic drug could reduce the excretion rate of Temazepam, making the drug’s impact last longer within your body.  At the same time, using alcohol in conjunction with taking this particular drug doubles its effects that could prove fatal. Instead of being a treatment for insomnia, it could do more harm than good. So the question of how long does Restoril stay in your system depends on a combination of these factors.

How Long Does Restoril Stay in Your System?

As Restoril belongs to a class of drugs called Sedative/Hypnotics, it would be relatively challenging for drug tests to pick out a small drug dosage. But detecting it is well dependent on which kind of drug test was taken. How long does temazepam stay in your system? Let’s find out through these tests.

The most common way to test for the presence of Restoril as a benzodiazepine would be through the standard urine drug screen, which is often accomplished as part of pre-employment requirements or regular employee assessments.

The regular dose should be positive in a Temazepam urine test for about a week or even less at five days. But in the case where the administered dose was heavier, it was possible to observe Restoril in urine for almost six weeks.

With this relatively increased dosage, Restoril could still be in the blood for two days. A Temazepam drug test using blood extraction is ordinarily used when a patient cannot give a urine sample or during hospitalization.

Meanwhile, in the saliva, it could stay for about nine days. A Temazepam drug test using saliva specimen has a longer detection window than typical blood tests. However, a significant amount of saliva samples is necessary for this to work. That’s why they tend to be much more expensive, too.

Another temazepam drug test can be done by testing one’s hair. A hair follicle test can detect the drug several months ago, as drugs tend to leave the hair very slowly, thus making it another viable option than the standard temazepam urine test. Restoril also has its way of staying in hair for up to three months, especially for long-term users or high dosage users.

All things considered, it is best to keep in mind that the detection mentioned above tools and duration of detection are not universal. The duration of Restoril’s effects in one’s body depends on many factors that are not limited to dosing, frequency of use, and one’s metabolism. 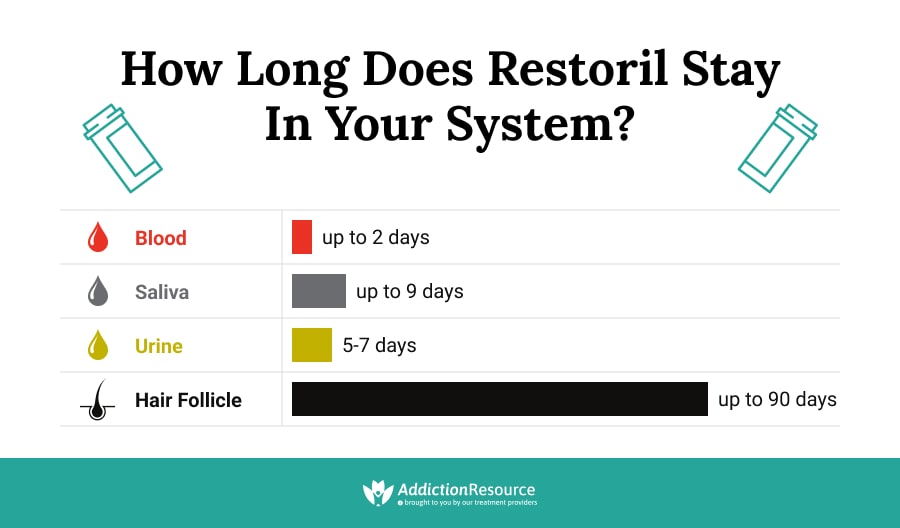 Restoril: Safe and Effective with Proper Use

In essence, Restoril is a safe and effective drug for treating insomnia and other mood disorders. It is a good way to ensure a good night’s sleep and induce drowsiness for those who need it. However, the effects of this short-term benzo on one’s body differ from person to person due to one’s physiological and metabolic differences. It is therefore not advisable to take the drug without proper guidance from a physician.

Some are tempted to use Restoril beyond the intended dose and duration because it helps relax one’s body. However, this is inadvisable because it can cause several adverse reactions if misused. It is in no way recovery for depression, especially without the specific recommendation of a doctor.

Overuse of Temazepam can result in ‘rebound insomnia,’ which causes enhanced insomnia even after rehab.

In cases of addiction, a patient is advised to seek a doctor’s help or immediate medical attention to determine the best steps to take for detox management.