Ecstasy Addiction: The Signs and Symptoms of MDMA Abuse

Ecstasy addiction stems from the influence it has on neurotransmitters in the brain. As both a stimulant and a hallucinogenic drug, ecstasy has unique properties which make it popular amongst the younger generation, who are looking for party drugs. MDMA abuse is often the reason Ecstasy addiction develops. When used as a party drug, it is rare that the substance is pure in its entirety. The other substances in the drug, as well as the psychological effects, create a craving for the drug which is often the beginning of MDMA addiction. So what are the other causes and symptoms of MDMA addiction? 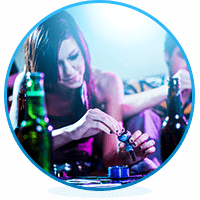 Ecstasy is a stimulant with hallucinogenic properties. It is the standard street name for MDMA. Addiction to Ecstasy is often psychological and due to the other substances mixed in with the MDMA, exaggerating its influence over the user. According to the National Institute Of Drug Abuse, Ecstasy targets the same neurotransmitters in the brain, that other addictive drugs do. This highlights the potential danger of getting hooked on the drug and other ecstasy side effects.
Due to rarely being over 10% in purity, Ecstasy abuse is always a significant health hazard. MDMA can be mixed with anything from caffeine and rat poison to cocaine, which makes it highly dangerous and can increase the chance of Ecstasy addiction.
MDMA health dangers may include things such as:

In addition to these dangers, MDMA is a popular party drug. This means users take it when going to clubs and bars. They often do not recognize they are building up to addiction, which puts them at greater risk of these symptoms and ecstasy overdose.

The Signs and Symptoms of Ecstasy Abuse

Due to the dangers of MDMA, it is important to be able to recognize the signs of Ecstasy abuse. Ecstasy drug abuse has clear characteristics which make the user stand out from the average person.
These characteristics include symptoms such as:

Facts and Statistics about Ecstasy Use 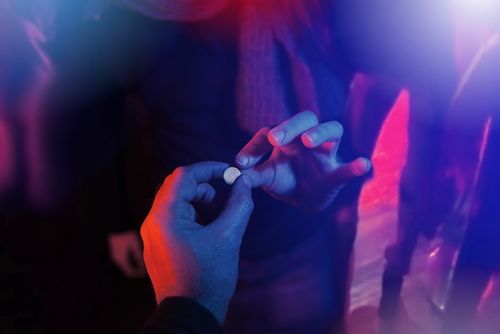 MDMA is a renowned gateway drug, which is partly why MDMA addiction is considered so dangerous. According to the National Drug Intelligence Center, most MDMA users are teenagers. More than 10 percent of those users are high school seniors and have tried MDMA at least once. Over 2 percent have used the drug in the past month. This highlights the fact that MDMA is introduced to people at a young age.

After developing MDMA addiction a tolerance, they may wish to move on to a stronger drug to seek the same high effect. The drugs they seek out could well be the same drugs they had mixed in unknowingly during their Ecstasy drug addiction.

Due to the increasing frequency of MDMA abuse in youth, emergency room visits have rapidly increased, and danger from the drug is rising, according to the National Institute for Drug Abuse For Teens. With almost 5% of all 12th graders have used the drug, and an estimated 92% of regular users going on to more extreme drug abuse, MDMA addiction is the gateway to a far more deadly addiction.

For treatment to be a success in any of these areas, dedication is needed. Recognizing MDMA addiction is always a good start. However, there has to be a personal desire and belief that quitting may be succeeding.
Successful treatment may integrate a number of these treatment methods to form a collective way of recovery that provides both treatment and coping mechanisms.

Ecstasy provides the user with such a buzz that can make them want the drug more and more. If one manages to achieve successful detoxification from MDMA, it is vital not to slip up and restart the process of addiction from the beginning.

There are some ways to cope with cravings which are taught through addiction programs, sticking to those methods and remaining on the right path is vital for maintaining a healthy life. Because MDMA is a gateway drug, it becomes all the more important to stay sober. Therefore one should ensure about having the support after the detox is completed.