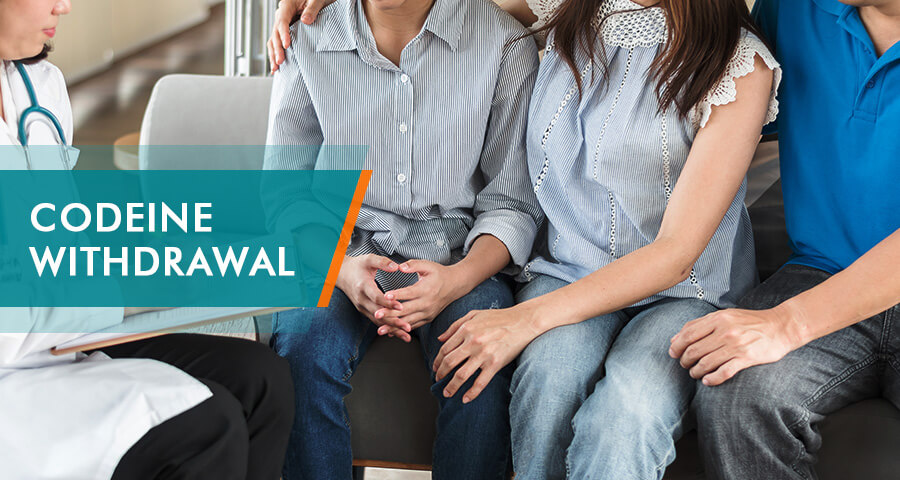 Codeine withdrawal commonly includes flu-like symptoms, such as: headaches, fever, runny nose, nausea, vomiting, stomach cramps, body aches, diarrhea, and sweating. Withdrawal can also include symptoms such as palpitations, irrational fear, agitation, insomnia, and even hallucinations and depression. Like most opioid withdrawals, the symptoms are unpleasant but not usually life-threatening.

How long does codeine withdrawal last?

Codeine is an effective opioid painkiller, used mainly for its analgesic properties. However, it is a narcotic and people can develop tolerance to it even when they take the drug as administrated by a health professional.
If a person develops a tolerance to codeine and becomes dependent, they might experience symptoms of withdrawal when pulled off of the drug.
Common codeine withdrawal symptoms include:

Some patients who have gone through codeine withdrawal share few helpful ways to cope with different withdrawal symptoms.

Codeine withdrawal symptoms and their duration are different for each patient and depend on various factors, such as genetics, general health, and history of abuse.

Early symptoms, such as anxiety, muscle aches, yawning, and sweating, can occur in a few hours after cessation of the drug. Late stage symptoms are a continuation of the early stage symptoms, plus restlessness, loss of appetite, chills, increased blood pressure, etc.
The worst symptoms can last up to a week. Users report that their third and fourth days of detox are a nightmare, but after that pains and anxiety decrease, so don’t give up!
After the first week of detox, some psychological factors, such as depression and cravings, can occur. Other psychological and cognitive issues that a user can experience are:

A month after the last intake, all physical symptoms should fade away. However, depression, fear, and codeine cravings can persist, which may lead to behavioral changes.

Withdrawal symptoms and their duration are individual for each person, but there are some treatment options suitable for all patients. Opiates can be dangerous as they can have not only psychological and physical effect on people, but they can affect the financial stability and social/family life of the addicted individual. Opiates are often mixed with other drugs, which leads to a polysubstance abuse.

Users say that going “cold turkey” is one of the quickest ways to get clean; however, this option can be painful and uncomfortable, and is not advised by medical society.

Tapering down may be a more feasible option. Some people take ibuprofen to cope with different codeine withdrawal symptoms, but that can have its side effects. Ask a professional for any possible doses to reduce the codeine intake and as mentioned above, have an active and healthy life.
Social support is crucial, and going through a rehabilitation program is a good choice when dealing with codeine withdrawal. Don’t forget that withdrawal symptoms and their duration are different for everyone depending on the history of abuse; treatment options to quit codeine are likewise also different.
There’s one thing to remember: a clean life is possible!