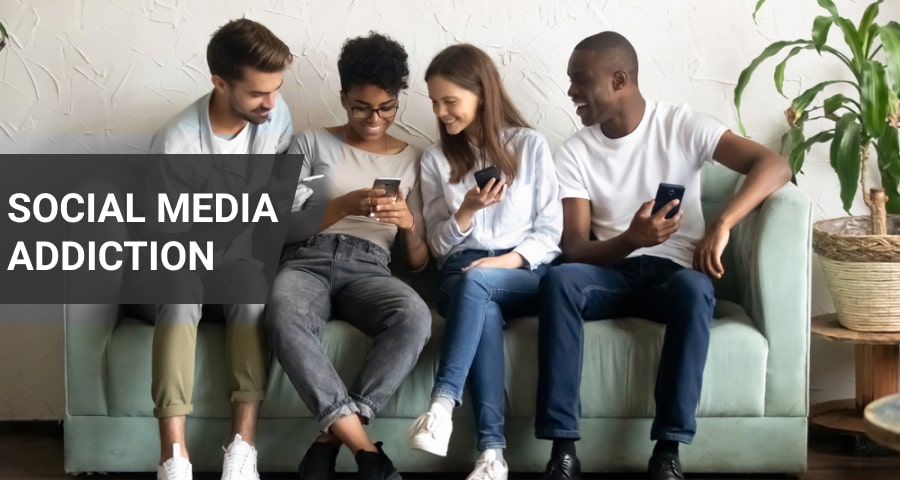 Social Media became part of our lives in the new millennium. As of August 2017, approximately 2 billion people are using Facebook around the world. Other popular platforms are Youtube, WhatsApp, Instagram, Linkedin, Google+ and Twitter with millions of active users.
Social media creates a network of people around the world. Therefore, they are able to share information, career interests and other forms of interaction via virtual communities.

The Impact Of Social Media

There is still an ongoing discussion between experts about the benefits and disadvantages of social media. We already have examples that show social media’s power such as:

Do we maybe spend too much time on social media?

A 2014 study shows that excessive use of technology by teenagers has caused disruptions in their physical and mental health, sleeping patterns, their weight and levels of exercise and notably in their school work.
40% of young adults and 21% of adults, admit to using social media even while in the bathroom. Why is it that we can’t seem to stay away from social media, even for a few minutes?
Well, research shows us that social media is addictive. Studies show that all the retweets and Facebook likes have affected our brain’s reward area. Social media interaction is like syringing dopamine straight into the system.

The Mechanism of Addiction

Our reward area located in the mesencephalon (midbrain), and its pathways, affect our decisions and sensations. When we experience something rewarding (or use an addictive substance) neurons in the principal dopamine-producing areas in the brain (the VTA) are activated, causing dopamine levels to rise. Therefore, the brain receives a “reward” and associates the drug or activity with positive reinforcement. For this reason, activities which increase dopamine levels are the basis to the mechanism of addiction5.

The Dangers and Signs of Social Media Addiction

Social media addiction is taking a toll on people’s lives at an alarming rate. People are losing their jobs, students aren’t paying enough attention to their studies, and even in some extreme cases, it has caused accidental death of children.
What’s more, a recent study shows that there is a link between social media addiction and negative mental health effects.

5 Signs that Should Make One Worry About Social Media Use

When you make a beautiful salad for lunch, what is more important? Eating the salad or sharing your photo on social media? With the popularity of Instagram, the visual aspect of food has become much more important than the practical one. This has added oil to the flames of food waste. We’re losing the abilities to properly plan meals and shop responsibly, which in turn results in mass food waste. Therefore, if you are spending your time making everything just to share on Instagram, Twitter, and Pinterest, it’s time for you to take a step back and evaluate yourself.

2. Sharing everything you do at anytime.

Do you have friends that you never see, but you know what they’re doing every minute of the day? If so, it is highly probable that you are also someone’s “social media friend”.

According to the author of “The Distraction Addiction”, Alex Soojung-Kim Pang, “We are interested in how much we have fun or what we do on social media rather than what we do [in the physical world]”. Of course, we want to share incredible experiences like vacations or concerts with our friends, but with the distraction of a phone and trying to get the perfect snap, are we missing more than we gain?

3. Knowing everything about people you don’t know very well.

According to Pang, the most important indicator of social media addiction is knowing everything about people we know very little in real life, due to social media. Details such as where we sit, what we do, friends, loved ones, what we ate for breakfast are widely available to us. This opens up the door to an intimacy that often is not achieved with real friends. How much we know about someone, without meeting them is actually a sign of how much time we spend on social media. According to one study by Pew Research as much as 88% of teens who use social media personally, “agree that people share too much information about themselves on social media”. If there is such a strong consensus about that, why do we do it?

4. Being unhappy, due to comparing yourself with social networks personas.

One of the signs that social media dependence has reached dangerous dimensions in your life is the feeling of jealousy. With the constant access to media, we are now able to follow people on their trips to exotic places, festivals, events. The ability to pick and choose what we share has opened the floodgates to creating online personas. Subconsciously we know that we only see a small fraction of reality online, however, we often choose to ignore that fact. Therefore, if your friends’ celebrations, gifts, homes, cars, wives and even body measurements have begun to cause jealousy, then your addiction has reached a serious high.

5. Being unhappy when you can not reach your phone.

Do you feel uncomfortable when you can’t control Facebook while stopped at traffic lights, or you can’t scroll through Twitter before you go to bed? One study shows that Americans check their phones every twelve minutes, while one in ten checks them every four. When unable to do so they begin to feel anxiety. This just shows how dependent we are, and how social media and technology addiction is a real issue.

If these signs and symptoms sound familiar, you may need to take a break from social media for a while. There are specialized behavioral and pharmaceutical therapies available for just that. To find out more about available options feel free to call. We would be very happy to help you.

Addiction Resource » What is Addiction: Definition of Abuse » Technology Addiction – What is the Illness of a new age? » Social Media Addiction – The Facts and Solutions