When mixed, Xanax and alcohol can cause numerous side effects, some of which can be fatal. Though alprazolam is seen as a safe medication when used correctly, all of that can change drastically when you mix the medication with other chemicals such as alcohol. Some alprazolam interactions can be relatively safe, whereas others can lead to severe side effects.

Risks of Mixing Alcohol and Xanax

Xanax is a trademark name for alprazolam, a medicine used to treat panic and anxiety disorders. It is from the category of anti-anxiety drugs known as benzodiazepines. Generally, alprazolam is a depressant, just like alcohol. It means both alcohol and Xanax work against the nervous system to slow down its activity.

Therefore, the interaction between Xanax and alcohol depresses the central nervous system, which is why they give a sedative effect. When mixed, the sedative effect doubles, leading to cardiac arrest, respiratory depression, and unconsciousness.

Mixing the drug with alcohol is extremely dangerous. Both substances are broken down in the liver by the same compounds and slow down the body’s natural detox process. It means that one’s body needs more time to get rid of both alcohol and Xanax. Therefore, drinking while on this medication is highly unsafe and can lead to severe health conditions, and in worst cases, even death. These depressants mixed will augment each other’s effects in the body and lead to potent properties. As a result, a plethora of risks arise. 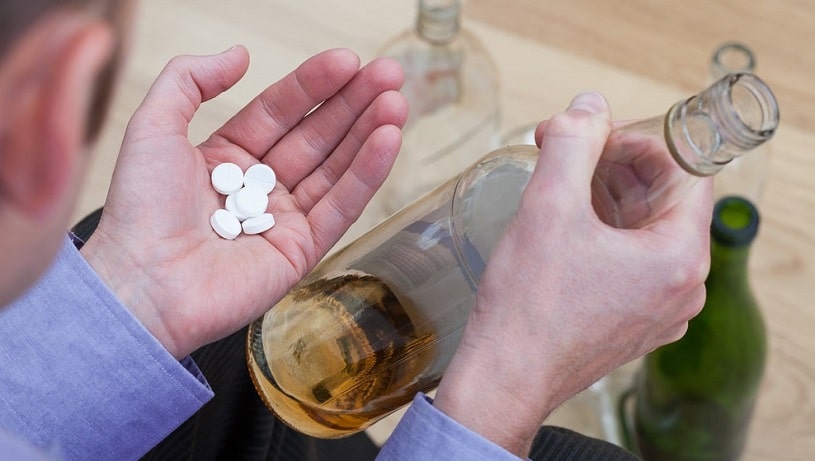 The number of emergency room visits by patients who mixed alcohol and Xanax in 2008 was 27,000, according to the Substance Abuse and Mental Health Services Administration (SAMHSA). These numbers are very steep, especially considering the volume of warnings people are aware of. At low doses, one might not experience any adverse effects of Xanax, but he or she is likely to increase the dose as tolerance occurs. Because both substances affect the concentration of GABA neurotransmitters in the brain, the sedative effects subsequently produced can be appealing to the abuser. However, the combination carries plenty of dangers, with comatose states and excessive sedation being the most common ones. This is especially risky if the drug is snorted, and not taken orally.

When these two depressants are mixed, oversedation occurs, which is a serious problem. Combining these two substances can have severe short and long-term consequences.

Alcohol intensifies the symptoms of alprazolam and vice versa. When taken together, Xanax and alcohol become more potent than when you used either of the two alone. As a result, one is at risk of overdose, respiratory depression, loss of consciousness, dangerous accidents, excessive sedation, and cardiac problems.

Other Possible Effects Of Mixing Xanax and Alcohol Include:

Both alcohol and Xanax have individual sets of side effects that impact an individual’s behavior and mental state. Because of this, the two should never be used together as it can cause life-threatening consequences. Respiratory compromise is unusual in isolated benzodiazepine ingestions, but if taken with coingestants such as ethanol or other drugs/medications, respiratory depression can be noted.

It is important to note that most intentional ingestions of benzodiazepines involve coingestants, the most common being ethanol, leading to substantial respiratory depression and airway compromise. The dose required to produce respiratory compromise is difficult to quantify and depends on multiple factors.

Additionally, it’s possible to have both alcohol and alprazolam addiction at the same time. In such cases, your body will become dependent on these substances, and you will go through withdrawal if you try stopping either of them.

If you continue to abuse the two substances together over a long period, it may result in severe health complications. Not just that, but you may also be at an increased danger of developing an addiction to the potentially dangerous combination. 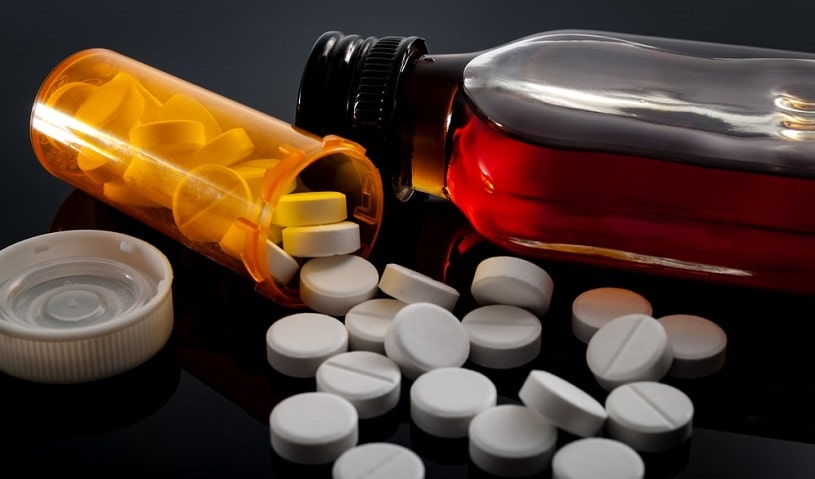 As time goes by, it will be harder for you to quit the dangerous habit, and the withdrawal symptoms are somewhat severe over time. Aside from the risk of dependence, you may also experience extreme psychological and cognitive reactions as your abuse progresses.

Alprazolam With Other Drugs

Mixing drugs is never a good idea. Unless prescribed by a doctor, the different medications should not be taken together, especially if they have a similar effect. For example, substances that act as central nervous system depressants should never be taken together as they have similar action pathways. Equally, stimulants and depressants like Adderall and Xanax shouldn’t be taken together as they have counter-effective properties. This means the effects of these substances will be canceled out, and the consumer may then increase the dose, which puts substantial pressure on the heart and can lead to a range of associated problems.

Mixing alprazolam with other drugs may shadow or exacerbate the drug’s effects, leading to life-threatening conditions. The danger increases if the secondary drug has stimulating properties or acts as a depressant on the central nervous system.

Well, if you have already mixed cannabis and alprazolam, there’s no need to panic. Unless you already took a lot of alprazolam, the combo is usually not life-threatening. However, it can cause several unpleasant side effects. 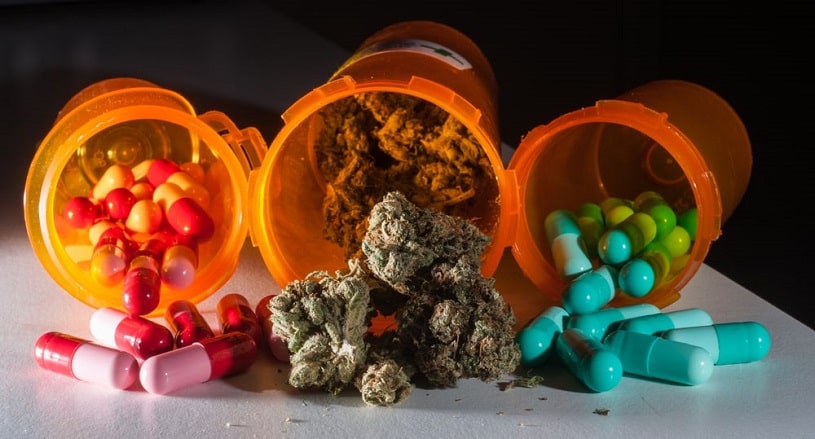 Even though there is less research to choose from, what we do know is that both are CNS — Central Nervous System depressants, which means both are capable of slowing down messages between your body and brain.

Additionally, when you use Xanax and weed separately in low doses, they can make you feel relaxed, euphoric, and lower anxiety. In higher doses, they can worsen anxiety and cause sedation, irritability, paranoia, and rapid heart rate.

However, be aware that a low dose for one person may be different for another depending on their tolerance. Combining the two may reduce the effects of each drug and make it easier to overdose on alprazolam.

Here Are a Few Possible Side Effects Of Mixing Alprazolam and Cannabis:

When you mix Adderall and Xanax, it can be extremely harmful to your health. The combination of both substances usually causes damage to the central nervous system. These two prescribed medications possess addictive properties. If taken consistently over a long period or abused, it can result in chemical dependence on the drug.

Mixing Xanax and Adderall increase an individual’s risk of being addicted to drugs. Xanax and Adderall influence the central nervous system and alter the natural functions of the brain. Since alprazolam is a depressant and Adderall is a stimulant, using both drugs simultaneously decreases the drug’s effectiveness for each respective diagnosis.

Typically, some individuals diagnosed with ADHD may try using alprazolam to lessen anxiety feelings. However, this may lead to misuse of the drug and can cause harmful side effects on the user. Also, individuals who have panic disorder or anxiety sometimes use Adderall to help increase their ability to stay focused.

Mixing Gabapentin and Xanax can enhance the side effects that they both share. The combination may increase confusion, drowsiness, dizziness, and increase the risk of overdose. When mixed, Gabapentin and Xanax high will significantly impair a person’s ability to operate machinery or a car. However, combining the two drugs with alcohol or other drugs increases the risk of causing coma and death.

Typically, both Tramadol and Xanax can increase sedation, drowsiness, dizziness, motor coordination, impairment in judgment, etc. Therefore, you should avoid driving or operating hazardous machinery until you know how they affect you. It is also essential that you explain to your doctor about all other medications you use, including vitamins and herbs. 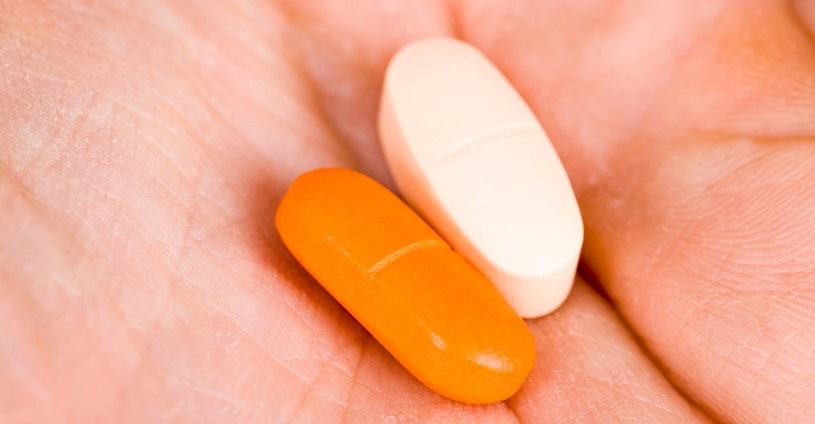 However, using cough or narcotic pain drugs and other drugs capable of causing central nervous system depression is harmful. It can lead to serious side effects, including coma, respiratory distress, and even death. According to a report on Fatal overdose of tramadol and alprazolam, an overdose usage or abusive combination of both drugs can lead to severe consequences.

Alprazolam interactions with other substances may alter your medications’ work or enhance your risk for serious side effects. Xanax drugs are better taken alone without any other substance whatsoever. However, do not start, stop, or change any medicines’ dosage without your doctor’s approval. However, most other drugs can affect the removal of alprazolam from your body, affecting the alprazolam interactions with your system.

Some Of the Examples Include:

In most cases, the risk of severe side effects such as extreme drowsiness or dizziness, shallow or slow breathing may increase significantly, especially if this medication is taken with other products that may also cause drowsiness or breathing problems.

Although alprazolam is quite effective in providing help with mental disorders symptoms, it can also lead to addiction. Moreover, mixing Xanax and alcohol or other drugs can lead to fatal consequences. So, one should avoid mixing alprazolam and other substances without a consultation with a doctor.
Even with all warnings in place, most people don’t stop abusing high-risk substances even when it puts them in great danger. Though steering clear from substance abuse may seem impossible or even challenging, however, with the appropriate support and guidance, you can attain sobriety. Various treatment centers provide support for substance addiction and help patients go through the withdrawal process safely and stabilize their lives.