Steroids And Alcohol: Can One Drink While On Anabolics?

Just because someone is on a medication such as anabolic steroids does not mean they will not want to drink alcohol. The question, however, is if drinking while on steroids is safe to do. Here is what users should know about mixing steroids and alcohol.

Learn About Mixing Anabolics And Alcohol:

Steroids And Alcohol: Reasons To Mix Both

Drinking on steroids is relatively common amongst users, whether or not that is a good idea. Steroids are not illegal if prescribed by a doctor, and neither is alcohol as long as the drinker is of age. The reasons why someone might mix AAS medications and alcohol are varied. However, the two most common are doing so to socialize and mitigate the effects of a condition called estrogen rebound.

It can be difficult as an adult to socialize with friends or even attend business functions without drinking. Thus, many adults end up drinking on steroids. Some do this despite knowing the risks while others do it unknowingly, not understanding that alcohol and steroids can be a bad mix. 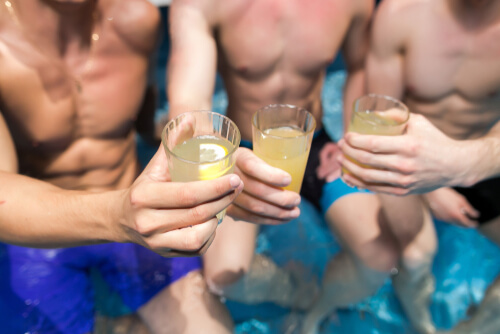 Additionally, drinking is part of the culture of many sports. After a game or competition, athletes get together and head out to a local bar for some drinks. And given that anabolic steroid use is generally hidden, the user may not feel as though they can bow out without revealing their secret.

Among other effects of anabolic steroids, there is something called estrogen rebound. This condition is the plummeting mood AAS users experience when the drugs wear off between doses, creating a depressive state. Many believe that this chemically induced depression is a major motivator amongst users to mix steroids and alcohol. However, because alcohol can increase estrogen in the body, it tends just to make the low mood worse, creating a dangerous cycle of use.

Drinking On Steroids: Is It Safe?

Drinking on most medications has the potential to cause negative side effects in the user. This is true for drinking while on steroids as well. However, the risks are not considered to be as great as with many other medicines. Most doctors who prescribe AAS drugs acknowledge that drinking in moderation while on the medication is okay.

The concern arises when one or both substances are being abused. For example, someone who takes anabolic steroid injections twice as often as they will have an increased risk of dangerous mental and physical side effects when drinking. Moderation is key when it comes to steroids and alcohol. 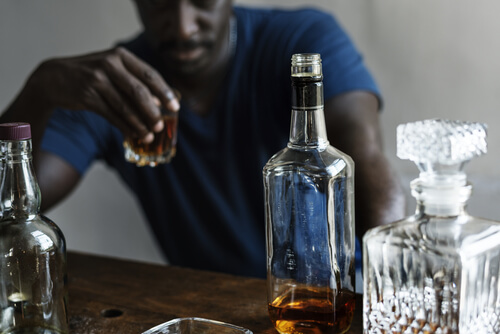 Understandably, people taking AAS drugs may not wish to abstain from alcohol while using them. Drinking is often a part of socializing, and pairing the right drink with a meal can greatly enhance it. However, once users understand the risks, they may wish to cut back their imbibing or stop it completely. Mixing AAS drugs and alcohol can cause a wide variety of problems, including:

Due to the steroid mechanism of action, the development of these side effects can be unpredictable. It is important that users understand them in full before they take on the risk of drinking while on steroids. In case, abuse of any of both substances becomes an addiction, it is critical to seek proper treatment.

Both alcohol and anabolic steroids are hepatotoxic. This means that they have the ability to damage the liver cells when the organ is processing the substances. Using them at the same time means putting extra strain on the liver, increasing the risk of damage. Some AAS medications are more hepatotoxic than others, so users should research their AAS medication of choice before drinking.

No matter what AAS drug a person is on, having more than a few drinks a week will greatly increase the risk of damage. Thus, while one can drink on steroids, this means occasionally, not habitually. Straining the liver with drinking on steroids is best avoided completely if possible.

Combining two immunosuppressive substances has the potential to harm the user greatly. Given that athletes need always to be their best, using both alcohol and steroids is counterintuitive. They risk getting sick often and performing less than their best as a result.

One of the lesser-known consequences of drinking on steroids is the impact it has on mental health. Athletes focus heavily on the physical self, and thus, are not always thinking about the mental health consequences of their actions. However, mental health side effects, including mood swings and violent behavior, are attributed to both steroids and drinking.

Due to the way AAS drugs impact testosterone and estrogen, users can cycle between feelings of euphoria, rage, and deep depression. This can result in them acting out in unpredictable and harmful ways.

Similarly, alcohol use can result in changes in mood, lowered inhibitions, and unpredictable behavior. Drinking while on steroids merely amplifies these effects, making the user a danger to themselves and others. Roid rage, a side effect of AAS drugs, can only be made worse with this combination.

Finally, there is the fact that mixing steroids and alcohol can undermine the results the user is working so hard to achieve.

Everyone has heard the term “beer belly,” and this is very much a reality. However, it can be caused by any form or alcohol—and the effects can be seen everywhere, not just in the abdomen.

Alcohol has a negative impact on the hypothalamic-pituitary-gonadal (HPG) axis. This is a hormonal and endocrine system that regulates the male reproductive system. Alcohol interacts with the system by lowering testosterone and allowing estrogen to become relatively higher. This can make the body more prone to retaining fat and reducing muscle mass. As a result, mixing alcohol and steroids can, in effect, render the AAS drugs useless.

If someone is engaging in dangerous drinking habits while on AAS, they should seek help. Dependence on AAS drugs and addiction to alcohol are both dangerous. Drug rehabilitation facilities can help users get away from anabolic steroids and alcohol to live a better life.