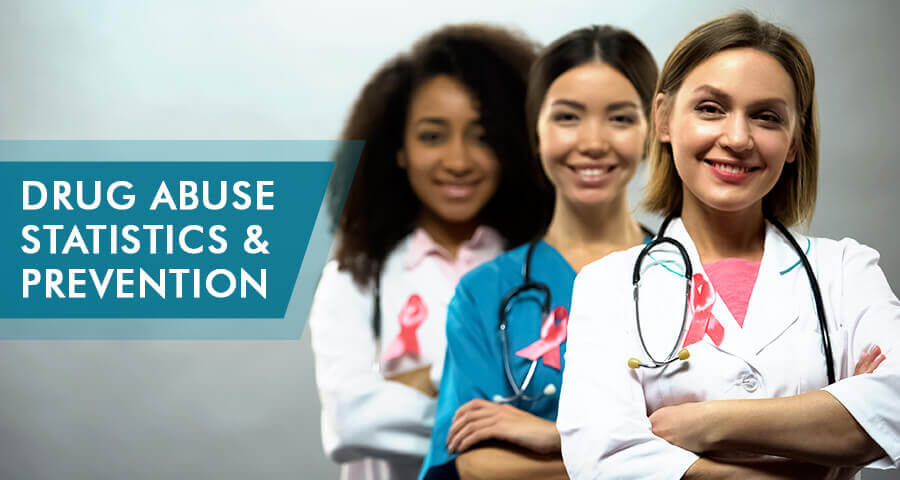 Despite the health risks, and the negative effects it causes in work and family relationships, drug abuse is still a significant problem in the US. Although there are numerous drug prevention programs, and the government’s “war on drugs,” people continue to experiment with both illegal and prescription medications.

How Many People Abuse Drugs In the U.S.?

How Many Overdoses Are Caused By Prescription Drugs Compared To Illegal Drugs?

Compared to illegal drugs, prescription drugs cause more overdoses than heroin, meth, and cocaine combined. Prescription drugs such as depressants, opioids, and anti-depressants are responsible for up to 45 percent of overdose deaths each year.
In one year alone:

Prescription medications are also responsible for more overdose-related deaths than illegal drugs. Depressants, opioids, and anti-depressants cause up to 45% of overdose deaths in the US each year. That’s more than the combined total of heroin, methamphetamine, and cocaine.

27.2 percent of high school students admit to having used illicit drugs. By their senior year, 21% of teens report having used marijuana, and 6% claim to use the drug daily.

Who Is Most At Risk Of Drug Abuse?

There is a reason many anti-drug and alcohol campaigns have been aimed at young people – namely teens and college students. Schools begin teaching children about the dangers of drugs as early as elementary school, with warnings of “just say no!” This is because young people are more likely to try drugs for the first time than adults. Over a quarter of teens have used drugs by the time they graduate high school. There are various reasons teens, and college students are more likely to try drugs:

How Is Drug Abuse Prevented?

Although drug abuse is still a major issue among young people, and adults, preventative methods have been successful at keeping some youth from using harmful substances. Preventative methods usually focus on:
Education – The more teens understand how dangerous and life-changing drug use is, the less likely they will be to use themselves. Many teens know that drugs are addictive, but they may not realize that some drugs are addictive even after only one use. They may know the signs to look for, or what constitutes drug abuse. Having this knowledge can help them make smarter choices, or seek help at the first sign of trouble, either for themselves or loved ones.
Entertainment – Some kids wind up using drugs because they’re on the streets after school, giving them prime opportunity to run into the wrong people at the wrong time. Recreational centers and programs for kids to partake in have had some impact in preventing teens from using drugs by offering them positive ways to expend energy and pass the time.
Mentorship – Because many teens use drugs as a form of self-medication to cover negative emotions stemming from poor self-esteem or a dysfunctional home environment, mentorship can help steer young people in a better direction. Mentors may take the time to tutor kids in school subjects, discuss life events, or just give them someone to hang out with to prevent loneliness.

Offering proper mental health access to these individuals is pertinent since their care, and a physician should closely monitor potential medication. Counselors and other mental health professionals are also often needed to help them manage stress and anxiety in healthy ways.

Prevention is a wonderful tool when combating drug use, but for those who are already ensnared in addiction, additional treatment options are needed. While support groups and outpatient counseling are suitable options for some, most patients would greatly benefit from an inpatient drug abuse-related facility. Inpatient rehabilitation combines peer support, counseling, and medical care to ensure patients receive the help they need to combat addiction on all levels. Alternative care may also be available in some facilities, such as nutritional counseling, meditation, or art therapies.
Additional outpatient counseling and peer-based support groups are often recommended for those who graduate from an inpatient program.