There is not one single path that is recognized as the only way to addiction recovery. In reality, one often has to seek professional help where options can be weighed and presented to see what works best for each specific context.

On that note, it is not uncommon to see people attempt to combine various effective approaches on the steps to recovery. For instance, a religious or spiritual person has faith-based options that can complement medical assistance. One such faith-based process in addiction recovery is the use of “God grant me the serenity” in AA.

Take a look at what the Serenity Prayer AA is, and how the prayer is used in alcoholics anonymous recovery programs.

What is The Serenity Prayer in AA?

What is the Serenity Prayer, and how did it become so popular? The Serenity Prayer was not originally drafted for the purpose of addiction recovery, but it has become widely used in the process today – especially in AA.

This prayer for recovery is a mantra that promotes self-help, which makes it very relevant for people who are struggling with addiction. It has gained such huge traction to the point where mainstream use (in consumer goods, for instance) is commonplace.

The Most Common Iteration of the Serenity AA Prayer is a Short Version that Reads:

However, the complete draft is fairly longer than that often-used version. The full Serenity Prayer reads as follows:

“God, grant me the serenity to accept the things that cannot be changed, Courage to change the things which should be changed, and the Wisdom to distinguish the one from the other.

Living one day at a time, Enjoying one moment at a time, Accepting hardship as a pathway to peace,

Taking, as He did, This sinful world as it is, Not as I would have it, Trusting that You will make all things right,

If I surrender to Your will, So that I may be reasonably happy in this life, And supremely happy with You forever in the next. Amen.”

Both versions read slightly differently after the “God, grant me the serenity“, but the message is the same.  The full Serenity Prayer is a call for help in finding peace and calm while being open and realistic enough to recognize situations that are out of one’s control.

When Is The AA Prayer Used?

Apart from being a regular mantra that is repeated during AA meetings, this AA prayer can be used in other scenarios that may not even involve a group setting.

Examples of Such Scenarios Include:

Clearly, the use cases of the AA Prayer are not limited to addiction recovery purposes alone. The AA acceptance prayer is a general boost that can be helpful even in the most mundane of situations.

Additionally, it is important to point out the fact that while the Serenity Prayer for recovery has a background in a specific faith/religion, it is still relevant for people that do not hold or share that faith. The message and sentiments of the AA prayer offer a great deal, even without the nuances of its religious ideas. 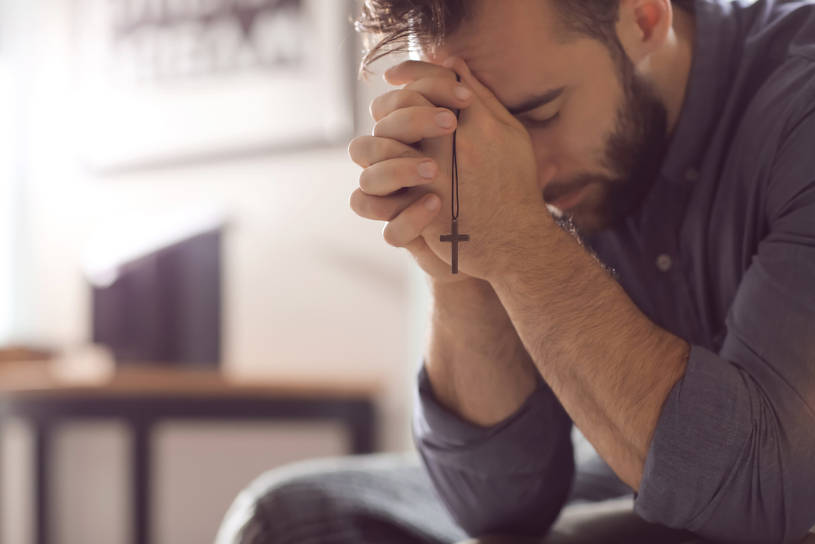 What Is The History Of The Alcoholics Anonymous Prayer?

The history of the AA Serenity Prayer can be traced back to a diary entry by the German-American theologist, Reinhold Niebuhr in 1932. The original diary entry went thus:

“The victorious man in the day of crisis is the man who has the serenity to accept what he cannot help and the courage to change what must be altered.”

The years following that date saw the message altered and used in various contexts and forms, although it is not clear which specific alterations were Reinhold’s and when he first spoke/read the words in front of an audience.  According to Reinhold’s daughter, Reinhold had first used the message in a speech against Nazi Germany in 1941 – 9 years after the diary entry. However, this could not have been the case as Winnifred Crane Wygal, an acquaintance of Niebuhr, had attributed the message to Reinhold in a book that she published in 1940.

Considering the fact that she had used the prayer for the first time as far back as 1933, then Reinhold must have read it in front of an audience before then – almost immediately after the diary entry.

While those finer details remain up for debate, it is safe to surmise that Reinhold made various alterations to his quote to suit various speeches. This led to the AA Prayer being picked up by close colleagues and published in prayer books by ministers.

One of such publications was the Book of Prayers and Services for the Armed Forces, which was distributed nationwide and to the armed forces that went overseas.

As a result, the majority of Americans soon knew Al Anon Prayer by heart, and it began to gain traction in self-help spaces such as Alcoholics Anonymous.

The Importance Of The Serenity Prayer In Recovery With AA

Not everyone believes in using religion as an effective addiction recovery step, but this is a flawed way to look at the use case of the AA Serenity Prayer.

Instead, it is more beneficial to view the Alcoholics Anonymous prayer as a mantra – one that is easy to remember and helps to remain centered and at ease.

One of the biggest challenges of a recovering addict is keeping the mind occupied while it tries to conjure various reasons for relapse. The message in the AA Serenity Prayer helps to achieve exactly that, serving as a constant reminder that courage, wisdom, and acceptance are crucial to traversing the long road to recovery.

For some, AA Prayer is simply a motivational, spiritual quote that helps to get through the day, regardless of the existence or absence of significant problems.

For Addicts in Recovery, the Serenity Prayer AA Does More than that:

Accepting Things That Cannot Be Changed

One thing that one may struggle with regarding the AA Prayer is “Accepting things that cannot be changed”, and there is a recommended three-step process to dealing with this.

First, one needs to identify the aspects that there is some control over, and divert focus to that instead. Then, one needs to constantly remind oneself about the good things – this will serve as a beacon of hope that things can be good once again, and as motivation to make that happen. Thirdly, it is important to keep the mind busy, as an idle mind is a home to negativity.