Ayahuasca High – A Spiritual Experience or the ‘Vine of the Soul’

Ayahuasca, also known as ‘yagé’ or ‘iowaska,’ a psychedelic tea which is brewed  by cooking the leaves of Psychotria Viridis (or Diplopterys cabrenana) with the bark of Banisteriopsis caapi. In the Quechuan languages of Peru, Colombia, Bolivia, and Ecuador, the name Ayahuasca translates directly to “soul” or “spirit’ but is derived from the word aya meaning “rope” and waska from the word meaning “tether”.
The active ingredient in Ayahuasca, DMT (or dimethyltryptamine) is naturally produced in the pineal gland of the human brain. İt is believed this is released during the 49th day of fetal development, as well as birth or a near death experience. It also can occur during the ‘shutdown’ process the body undergoes at the time of death. During these moments, people using this drug will get an Ayahuasca high.

The experience of having an Ayahuasca high happens after orally Ingesting the ingredient. Monoamine oxidase (MAO) which is produced by the salivary glands will Immediately break down the molecule before it can be absorbed into the bloodstream. For this reason, the bark of Banisteriopsis caapi is added to the mixture, which enables the body to absorb the potent hallucinogen DMT.

Physical Reaction to an Ayahuasca High

Getting high on Ayahuasca is dangerous for one’s health, as well as against the law.

The drug induces a trancelike state, not unlike psychosis, and users report:

Overdose on Ayahuasca and DMT have in rare cases resulted in a coma or even death.

Psychological Effects of an Ayahuasca High

DMT is universally regarded in both medical circles as well as the psychedelic community, as the most potent hallucinogen. In fact, they agree that it is similar in action but vastly stronger in effect than:

Below explores the broad range of psychological effects of Ayahuasca in more detail.

Clinical Testing of DMT in a Lab Setting

Users reported the ‘come-on’ of an Ayahuasca induced high to include:

The users encountered these effects before profound closed-eyed hallucinations ensued, which Strassman categorized as follows:

Personal experiences from an Ayahuasca high centered on the users’ own physical and mental processes which are not dissimilar to both physical or emotional thoughts psychotherapists encounter in sessions with their patients. The fundamental processes of psychotherapy surfaced during a high, which included feeling, thinking, recollecting and connecting ideas with emotions.
Some research subjects reported they had been able to confront difficult personal problems and found a sense of closure. For example this may have included past traumas which until then had not been addressed. Such testimonials during the study made researchers conclude that unconscious mental processes became conscious to some of the subjects.

During an Ayahuasca high users who ‘journeyed’ past the level of personal experiences, reported traveling to fantastical planes of existence, making contact with beings resembling angels, ‘guides’ or aliens. In addition, they felt these new realities coexisted with the physical world.
Some users have reported experiences of traveling aboard alien spacecrafts or exploring futuristic, alien cities. Terence McKenna, an edifice in the psychedelic community, commented on encountering “self-transforming machine elves.” Whilst others have reported meeting races of “insect-like beings” or “human-alien hybrids.”

The most sought after ‘journeys’ in the psychedelic community are those which are distinctly spiritual. Many users experience what they describe as a physical death during their Ayahuasca tea high which came with a transcendence to a place beyond the physical realm. 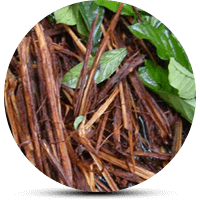 Many users report all the classic hallmarks of a near-death experience, which have included traveling down a tunnel of light, angelic music, and often the presence of deceased family members and friends. Some experience a rapid and organized recollection of their lives ending at the present moment.
Often whoever is with them while tripping and high instructs them to return to life (here and now) as it is not yet their time to ‘cross over.’ They describe these experiences as sacred and quite divine, often with strongly religious overtones. In fact, religious test subjects often reported to have met with God or said they could feel God’s presence.
One user described her trip as a sensory likeness to the process of dying; traveling in an astral plane between life and death as described in the Tibetan Book of the Dead. Many go onto describe the high as a mystical experience and a profound transformation, often where they feel the entities of the self, space and time, undergo a fundamental transfiguration. Time can feel like it stops and the perception of space becomes broader achieved by including non-physical dimensions.. Often people experiencing the high see the self as a separate entity. This is known as the ‘ego-death phenomenon which is not exclusive to the Ayahuasca experience but also when high doses of LSD, psilocybin, and mescaline are taken.

An Ayahuasca high is by no means a universally positive experience. A number of users, including subjects from Strassman’s studies have reported traumatic experiences more similar to those who reported being abducted by aliens. That said, this coincided when more invasive experiments were performed on them by the “others.”

Certain users experience a vivid recollection of past traumas. They included past encounters of sexual trauma or physical violence.

Dr. Jonathan Nel (a psychotherapist) explained in an interview that, “one of my patients explained the Ayahuasca experience as like having 10 years of therapy condensed into 10 hours. As a result, this can be very traumatic on the human psyche.”

The Ayahuasca Experience as a Tool for Psychotherapy

Ayahuasca is not a drug in the Western sense as in it is prescribed to be taken to get rid of something. Properly used, it can open up parts of a person usually they have no access to, parts of the brain that hold emotional memories, and which come together are offer greater insight and awareness, therefore some can perceive past experience in a new way.

Many users of the drug herald it as a godsend, however the medical and psychotherapeutic community remains strongly divided on its therapeutic use. This is because it comes with little in the way of documented therapeutic interventions. A number of researchers claim that the drug is very useful in ending severe addictions. They include alcoholism and addiction to opiates, where 12 step programs have failed.

I feel part of the environment, not separate from it, as though I’m at home rather than visiting. It is as though I’m tapped into some eternal omnipresence beyond the transient physical forms.

They class the mixture as an entheogen which literally translated from the Greek word entheos, means “generating the divine from within.” Since the early 2000’s, Ayahuasca retreats in the Andean countries of South America have sprouted up across the Amazon. As a result, it is attracting thrill-seekers and psychonauts from across the globe. They prepare and administer the drug to visitors by shamans (called ‘ayahuasqueros’) in a jungle setting. This Ayahuasca experience ancient cultures involves various rituals which often combine drumming and chanting.

The drug creates synesthesia – a state in which one sees sounds, and hears visual signals.

Attendees to the Ayahuasca ceremony usually undergo a form of “purging”  by means of vomiting or diarrhea. As the drug peaks during the Ayahuasca high, they report communication with the spirit world which is under mediation and guidance of the ayahuasquero.
Whether on a journey of enlightenment or simply as a thrill-seeker, the Ayahuasca high experience remains on the fringes of the psychedelic world. Not a party drug and certainly not for the faint-hearted.