Ayahuasca Effects – What Every Ayahuasca User Should Know

In recent years, Ayahuasca has gained much acclaim and notoriety as a tool for “spiritual healing” however the potent hallucinogenic has a number of significant side effects..
It would be advise to anybody interested in experimenting with an Ayahuasca experience to really study how it will effect your body and mind. This is not a party drug but a very strong hallucinogen.

Ayahuasca is made up of two ingredients native to South America which come from the psychedelic Psychotria Viridis plant (or Diplopterys cabrenana) and the stems and bark of Banisteriopsis caapi. Together they form a psychedelic brew which is consumed orally like tea. Drinking the mixture makes the Ayahuasca effects and side effects less intense than smoking or injecting the active ingredient.

The drug acts by releasing DMT (or dimethyltryptamine) into the bloodstream where the brain absorbs it as a serotonin agonist (a chemical that binds to a receptor and creates a chemical reaction across all the brain’s serotonin sites triggering intense activities at the 5-ht2a receptors.

Doctors classify DMT as an entheogen but the exact understanding as to how DMT acts as such a potent psychedelic or entheogen is still unknown. Currently all the scientific community know is the brain naturally produced DMT in the pineal gland.
The primary reason why users are interested in experiencing the drug is for what some believe to be profound psychological effects.
Usually users of Ayahuasca consume the drug in a ceremonial setting in its country of origin thus it is not a regular recreational psychedelic and few will ever have the opportunity to experiement.

What are the Ayahuasca Psychological Adverse Effects?

Let’s take a look at the most prominent of the Ayahuasca effects. The Ayahuasca ‘trip’ has a very profound psychological impact on the user which can be either a very good experience or very bad and research into Ayahuasca use has not very rarely provide any ‘neutral’ experience.

Sometimes users are referred to as ‘psychonauts’ due to the extreme Ayahuasca effects of such a potent psychedelic. Many users of the drug report: 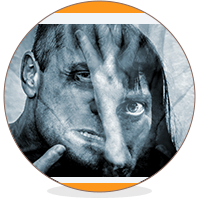 In terms of auditory and visual hallucinations, they say getting high on Ayahuasca is similar in effect to other psychedelics such as magic mushrooms, LSD, peyote, and mescaline.although Ayahuasca is exceptionally more potent though.

Ayahuasca may produce intense feelings of elation and euphoria which is connected to the ‘spiritual journey’ aspect of the experience. User accounts of positive experiences liken it to a ‘spiritual birth’ or ‘spiritual rebirth.’
Those who have consumed Ayahuasca warn that “the drug is not for everybody” as the intensity of the brew can evoke a very negative experience, especially in those with pre-existing emotional or psychological conditions like schizophrenia.

Many users report a journey into past traumatic events but viewed as a bystander almost like an out-of-body. The intense nature of the experience may evoke feelings of fear, paranoia and emotional hurt whilst one revisits these events. It is not uncommon for users who have these negative experiences to consume the drug again as a way to confront these past events in an attempt to ‘set things right.’

Persistent Psychosis is where users of a drug encounter continued emotional problems after consuming a drug, such as:

Hallucinogen Persisting Perception Disorder is where, after drug consumption, users suffer from:

This is the most prominently cited reasons for taking Ayahuasca as has been advertised on dozens of websites for Ayahuasca retreats. These can include:

The drug has a marked effect on the body and as a result users will find themselves unable to perform complicated tasks as most experiencing a Ayahuasca high become incapacitated. Therefore, many are susceptible to environmental dangers, which should be kept  in mind if taking Ayahuasca outside within nature.

Physical Side Effects of Ayahuasca

The Ayahuasca effects on the body include:

The National Institute on Drug Abuse (NIDA) advises the need for further research to determine whether DMT is physically addictive although current research suggests that users are not able to develop any tolerance for the drug.

In August of 2012, there was a report of an 18-year-old Californian man who died from consuming a lethal dose of Ayahuasca while attending a Peruvian Ayahuasca retreat. Unfortunately, the size of the lethal dose was not.

Currently, no medically recorded instances of persistent psychosis or HPPD exist. However, anecdotal reports confirm the danger behind the use of any hallucinogen; as some users report having to chronically take anti-psychotics to avoid Ayahuasca ‘flashbacks’. In some cases this may be very emotionally traumatic for the user.

The rising media attention given to Ayahuasca makes it unlikely for the drug to disappear from Western society. Furthermore, there needs to be much more research before DMT is fully understood.