What puts members of Greek-letter social organizations at increased risk of drug-related problems and alcohol addiction? Are there interventions that can reduce risky behaviors? Read on to find out the answers to these questions and more.

Substance abuse and heavy drinking are major problems on college campuses across America. All college students are at risk of excessive alcohol use and drug abuse, but sorority and fraternity members are some of the students who are at highest risk. Students who live in a social fraternity or sorority houses drink more alcohol in terms of both frequency and quantity. Studies have found that 50 percent of women and 70 percent of men who are sorority and fraternity members engage in binge drinking, which is significantly higher than the general student population.

Alcohol and drugs are responsible for a number of severe consequences, including injuries, assault, arguments, and property damage on college campuses. Drug abusers and alcohol drinkers are more likely to be the objects of unwanted sexual advances, to engage in unplanned sexual intercourse, and to contract sexually transmitted diseases. Surveys have shown that a higher percentage of Greek house members suffer blackouts and are taken advantage of sexually compared to non-members.

Substance Abuse in Greek Houses: Risky Alcohol and Drug Use

Membership of a Greek organization on a college campus has many social and professional benefits. It helps students make friends for life and develop a network of contacts. Yet, going Greek often exposes a college student to the use of a large amounts of alcohol and even illicit drugs. Partying and drinking is a part of the culture at these organizations, and it is difficult for members to escape exposure to addictive substances. Up to 80 percent of frat members are binge drinkers compared to only 40 percent of the general student population. Binge drinking in college students is associated not only with academic problems, but a high rate of sexual crimes, assault, accidents, and deaths. What makes sorority and fraternity members more likely to do drunks or binge drink? 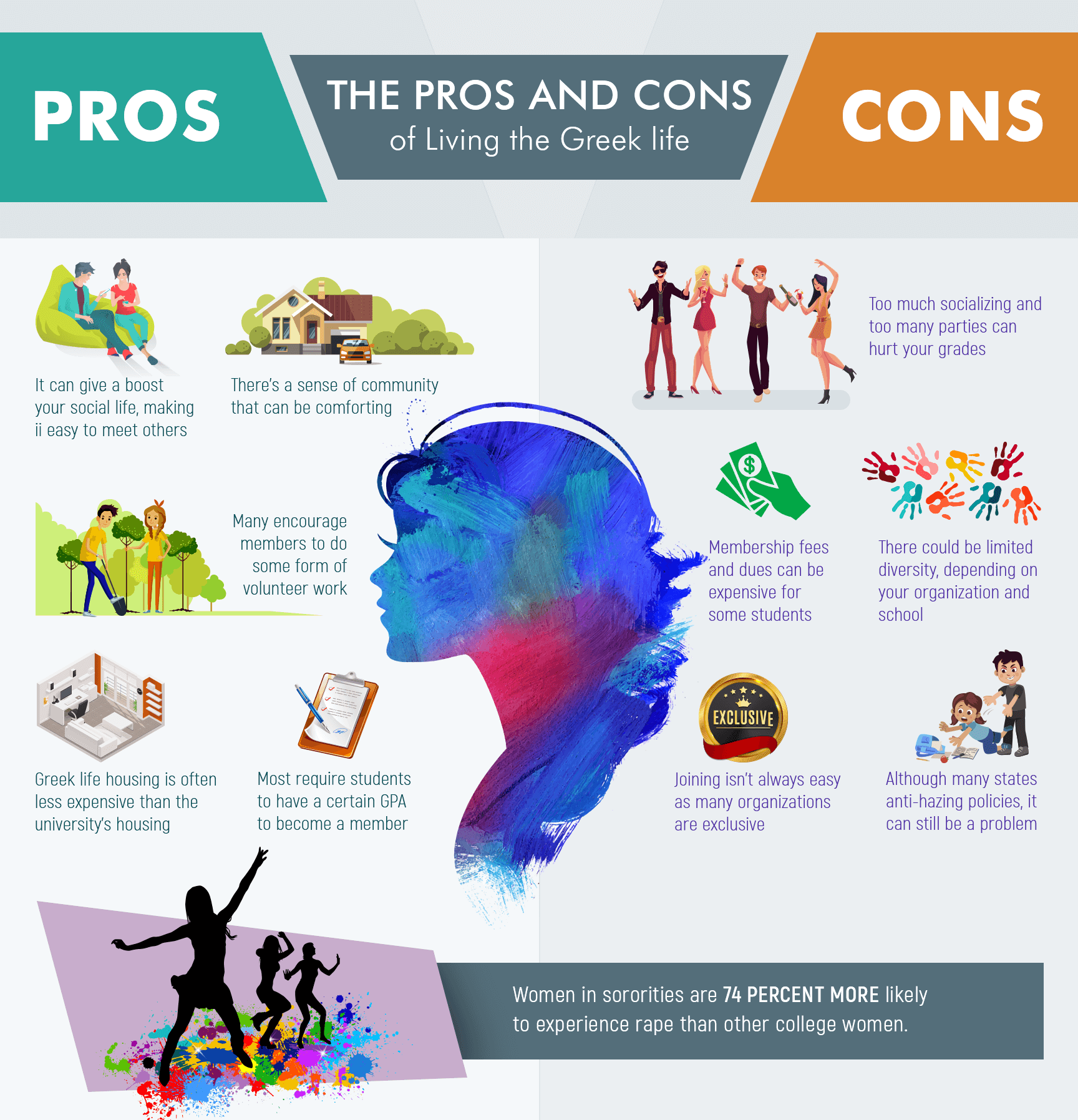 Not all organizations are party houses. Some have an academic focus, while others offer volunteer opportunities or are philanthropically oriented. Yet, social frats continue to be some of the most popular on campuses across the United States.

Is Drug Abuse Rampant in Fraternities and Sororities?

Greek-letter organizations have a bad reputation for reckless behavior that often overshadows their benefits. Yet, there is no doubt that compared to the general college population, members of frat houses and sororities are more likely to indulge in binge drinking, especially on the weekends. Men are at higher risk than women. Men are also more likely to engage in dangerous behaviors due to peer pressure from their brothers in a frat house. Caucasian frat members under the age of 25 are at the highest risk of developing a substance use disorder and facing the severe consequences of excessive alcohol use or drug abuse.

The rates of substance abuse, including marijuana, ecstasy, and heavy alcohol use, are higher in US college students who are members of a sorority or fraternity. Schools with a wealthy student population are more likely to see the use of designer drugs, whereas members of less affluent frat houses typically use alcohol and marijuana. About 60 percent of sorority women drink heavily compared to 40 percent of non-Greek women. Excessive use of alcohol is associated with an increased risk of engaging in dangerous activities or using drugs. Members of Greek houses sometimes foster negative self-esteem and body image, predisposing them to turn to alcohol or drugs.

Hazing rituals may cause extreme emotional trauma in some students. Sometimes, these initiation activities are downright dangerous, resulting in severe injuries or death. Many young first-year students arrive on college campuses with limited exposure to alcohol and illicit drugs. They simply do not have the tolerance levels of those already in the Greek system. A desire to fit in and lack of knowledge about their limits can have catastrophic results. A large percentage of deaths related to alcohol involve first-year students, and many of them occur during initiation rituals.

Many students are attracted to Greek life for the camaraderie, social status, revelry, and glamour. Members have access to academic opportunities and networking, but also to popular house parties. The truth is that Greek life is what a student makes of it. Leadership roles, academic pursuits, campus involvement, and the chance to make lifelong friends are available to those who want to avail the benefits of a Greek organization.

There are demanding requirements for membership of a Greek house. Members are required to maintain a minimum GPA, attend certain mandatory events, and perform community service or raise money. In fact, showing up intoxicated at certain events may invite a fine or suspension. Some of the activities at a Greek-letter house include:

Interestingly, many of the above-listed activities are dry events. The entire Greek house experience is designed to make the student a better person and navigate college life in the best possible way. Yet, the opportunities to drink or do drugs are abundant and some members choose to meet only the minimum requirements of the house and go all out when it comes to partying. 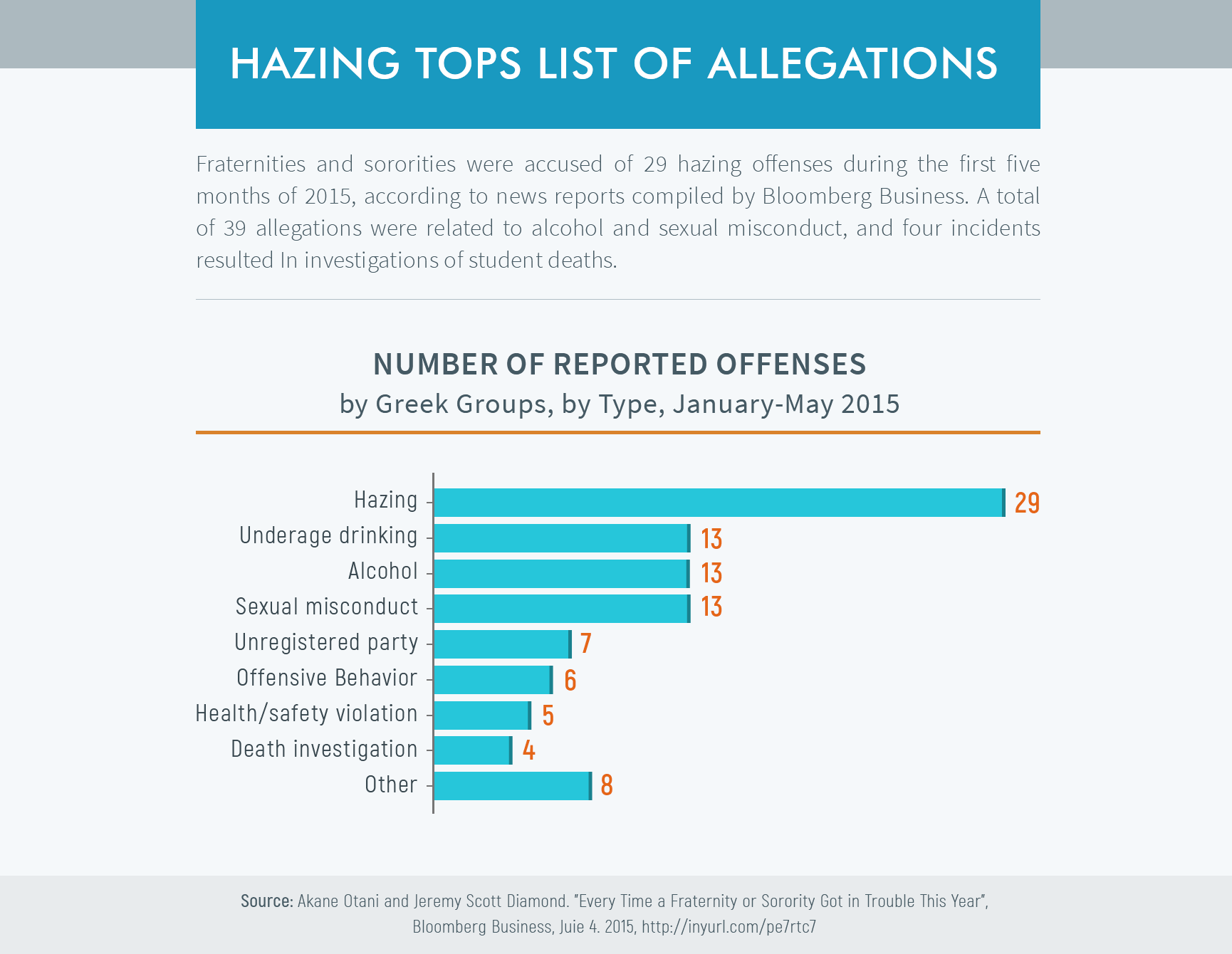 Can Fraternity Members Drink Responsibly and Avoid Drug Use?

College life in general places students in situations where they must make important choices, such as who they should be friends with and what activities they should participate in. Fraternity and sorority members have to choose between drinking and staying sober more frequently than the general student body. In fact, there can be immense pressure on Greeks to drink even at sober activities.

Partying may seem like the primary focus of many of these organizations, but drinking or doing drugs is certainly not a requirement to become a member. No Greek organization will throw out a student for refusing to drink or missing a party. So, it’s certainly possible for members to drink responsibly and avoid illicit drug use. Knowing limits and learning to say no are key factors for a positive experience at a college frat house. Here are some ways to avoid dangerous behaviors for members of Greek organizations:

How to Find Sororities and Fraternities That Don’t Predispose to Addiction?

There are several ways freshman students can find sororities and fraternities that do more than just drinking and partying. Here are some tips that can help identify groups that will make Greek life a positive experience without risk of addiction:

What To Do If  Greek House Has Problems With Substance Abuse?

At a small school, a fraternity or sorority may have no more than a dozen or so members. At larger campuses, membership can run into hundreds of students. With so many young men and women from diverse backgrounds, there are bound to be some people who are more likely to indulge in unhealthy behaviors and encourage others to join them.

It is not unusual for a small number of students to lead others in risky activities. These “bad eggs” are determined to do no good. Yet, many Greek house members remain silent for fear of being ostracized, without realizing that they are the silent majority that does not want to engage in such behaviors.

Alcohol use is more rampant in Greek houses. Drug use is usually limited to small groups. If a member of a fraternity or sorority finds that others are drinking too much or doing drugs, they should speak up, share their views, and try to change this stereotype of Greek culture. Although this takes courage, many times the student will find that other people feel the same way and are just too afraid to speak up first too.

Who Should Avoid Joining Sororities And Fraternities?

There are several advantages of Greek life on a college campus. Graduates who are members of Greek organizations are more likely to thrive socially and financially irrespective of gender, ethnicity, and socioeconomic status.

Yet, joining a sorority or fraternity is not for everyone. Students who should avoid the experience include those who have a history of drug or alcohol use, since the Greek system may place them in high-risk situations. Those with multiple time commitments may not be able to take on additional Greek responsibilities. Some students may be unable to meet the financial commitments of fraternities and sororities.

It is possible to thrive academically and socially outside Greek life. Several student organizations offer extracurricular activities and help with improving academic performance.

Recovering addicts heading to a college campus face unique challenges. They are psychologically and genetically prone to addiction and relapse. Exposure to alcohol or drugs at Greek parties can trigger intense cravings and a return to addictive behaviors. Before joining a fraternity or sorority, former addicts should research the organization and choose one that aligns with their goals and values.

Becoming a member of a social frat house or sorority may not be the best option for recovering addicts. Drinking and partying can quickly become a priority in the Greek system with academics taking a back seat. Some campuses offer collegiate recovery programs to help students with a history of addiction thrive during the college years.

It is possible to gain leadership experience, develop life skills, and build lifelong friendships without the financial obligations and time commitments of Greek life. One option is to become a member of a sober fraternity that isn’t part of the Greek system. On-campus organizations dedicated to sobriety allow students to have fun without alcohol and drugs at social events, while also making a smaller demand on time and money.