Alcohol and Drug Use in College – Switching Anxiety for Addiction

Going to university can be a major source of social anxiety for many students. The temptation to do drugs is strong because college students often find they make socializing easier or help them study harder. Of course, not all college students start abusing drugs or binge drinking right from the start, but regular use of psychotropic substances has put many on the road to addiction.

Trends change over time and no college is immune to drugs, particularly the latest ones. Notwithstanding this fact, college students abuse a few substances consistently over time. These are alcohol, marijuana, hallucinogens, and prescription pills, of which Adderall is most prominent.

Adderall is a common choice among college students who are struggling with academic requirements. A study by the Journal of Clinical Psychiatry examined trends of use of this substance from 2006 through 2011 and found that up to 33% of the college students surveyed were taking it non-medically, usually getting Adderall prescriptions from family members and friends or illegally without any prescription.

As more and more states legalize medical marijuana use, more college students are turning to Mary Jane as their drug of choice. It is more popular than alcohol on some campuses. Its rampant use on campuses goes back to the 1950s, when the Beatniks — a young, rebellious social group – helped introduce it at the college level.

From LSD to Ecstasy

Social revolutions continued into the 1960s and 70s, and university students were the main bearers of new views and convictions. Their newfound freedom helped usher in the next level of drug experimentation, and mushrooms, LSD, and other hallucinogens hit campuses nationwide.

The mass drug-related Latin American crime wave in the 1980s rendered cocaine the drug of choice across many social groups, including top college students and athletes.

Ecstasy, which became popular back in the 90s, is now in the spotlight again. College students are within the target age range for MDMA, a drug commonly distributed at parties and concerts.

The popularity of prescription pills surged in the 2000s. Students with prescription drugs started sharing or reselling medication to classmates, leading to widespread use on college campuses. Use of painkillers rose at the same time.

Alcohol abuse remains one of the major problems as this substance is legal and easily accessible.College students are much more likely to involve in heavy drinking behaviors than their non-college peers. 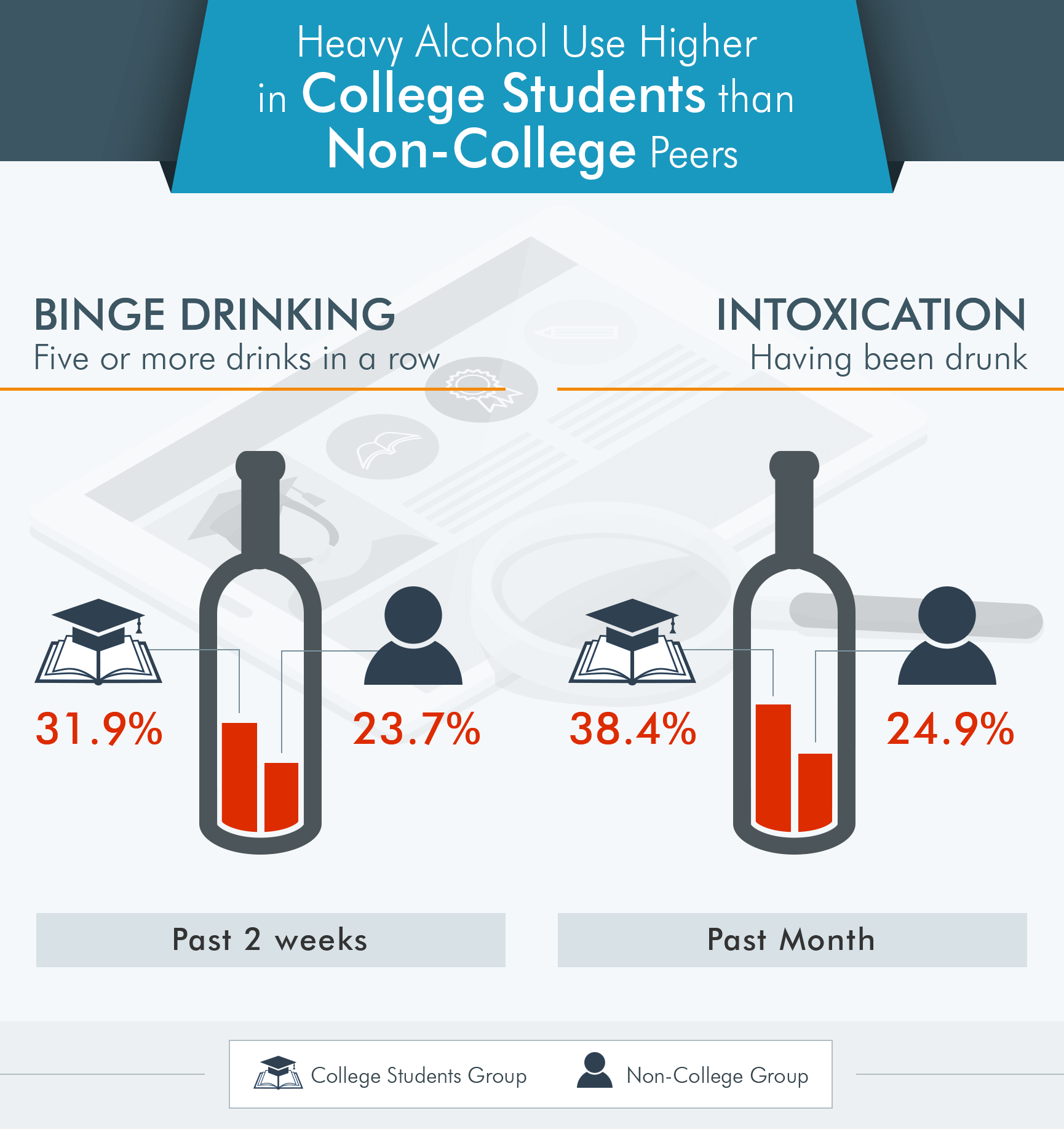 Drug Use Over Time: Then and Now

College students are doing more drugs than ever. Illicit drug use rose from 34% in 2006 to 43% in 2016, the highest in the past 30 years, according to the Monitoring the Future study. Read on to see how use of the most common drugs on campuses has evolved over time. 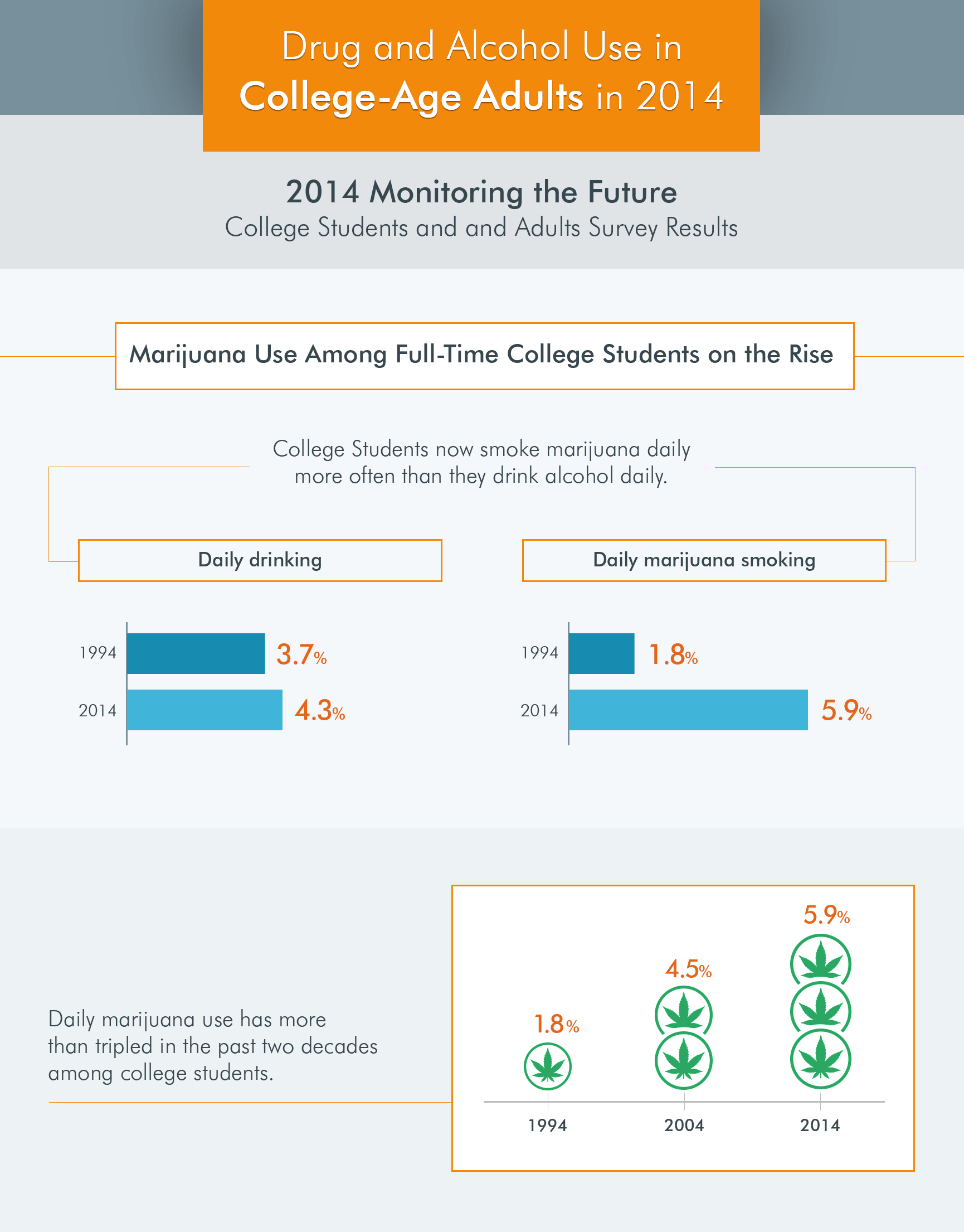 Why Do College Students Turn to Drugs?

College students usually turn to drugs to deal with academic and peer pressure, relieve stress, forget their problems, and “fit in”. College administrations are largely unconcerned, thereby facilitating a culture of drug abuse. What are the most common reasons behind the staggering rates of drug use on campuses today?

While the Greek system (fraternities and sororities) does offer some professional and social benefits to its members, these students are also much more likely to abuse substances compared to their peers outside the system. Why is this? There are a number of reasons.

Unsurprisingly, alcohol and marijuana are the psychotropic substances most widely used (and abused) by college students. However, they are far from the only ones. Others include anabolic steroids, stimulants and psychedelics, and “study drugs.”

Where Do Students Get Drugs?

As noted earlier, practically no drug is hard to come by in college. Students can get and do drugs in their dorms, clubs, bars, and even libraries. Read on to find out where most drugs in college are available.

Tolerating a Culture of Substance Abuse

The college landscape is rife with individuals who are not only turning a blind eye to the issue of substance abuse on campus, but even actively contributing to it. These range from coaches giving their players steroids to parents insisting on prescription medication for their kids to keep them relaxed in school and doing well academically. It is no wonder, then, how widespread the problem has become.

According to a survey on 400 college administrators conducted by CASA, a majority of deans, college presidents, and alumni accept drinking and drug use as part and parcel of college life, even a rite of passage. College administrators are consumed with making money, constructing new facilities and hiring faculty. Drug abuse is not on their list of priorities. Resources for administrative staff involved with student conduct are low, and turnover is high.

Incidences of drug abuse are definitely lower at schools with stricter policies and rules in place, such as Georgia State University, but at any rate, school administrators cannot reasonably be expected to combat this problem alone. They need help from parents, former and current students, athletic and Greek organizations, and local, state and federal authorities.

75% of college students who drink and/or do drugs were set in their ways as teens. 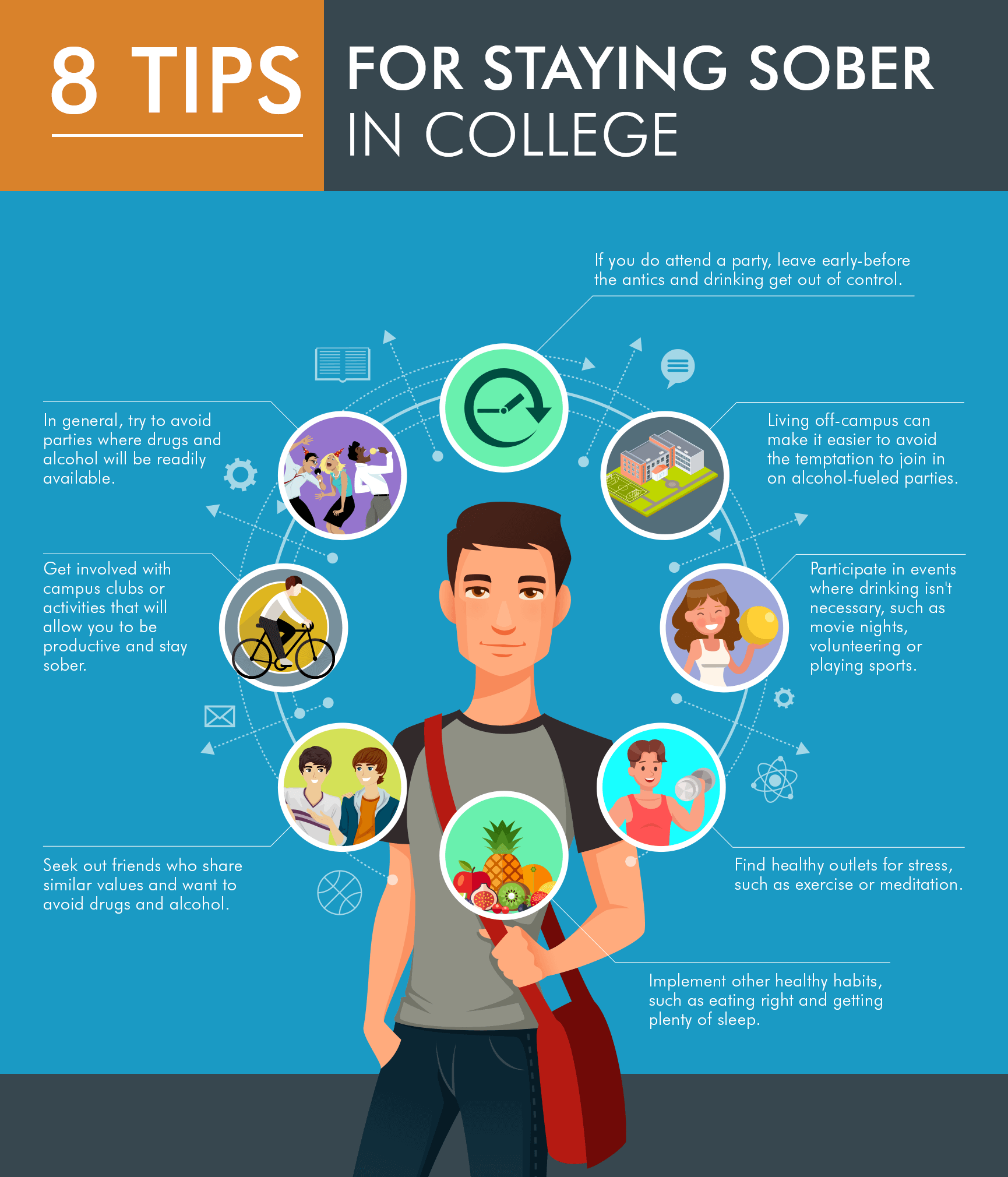 One of the ways to tell a student is abusing prescription drugs is if they’re going for refills more often than planned or expected. It’s not as simple as that, of course – prescription drug abuse and addiction are a complex issue.

College students struggling with prescription drug addiction face various health risks, including an overdose that may be fatal. Measures can be taken to make sure one is using prescription drugs safely in order to prevent addiction. 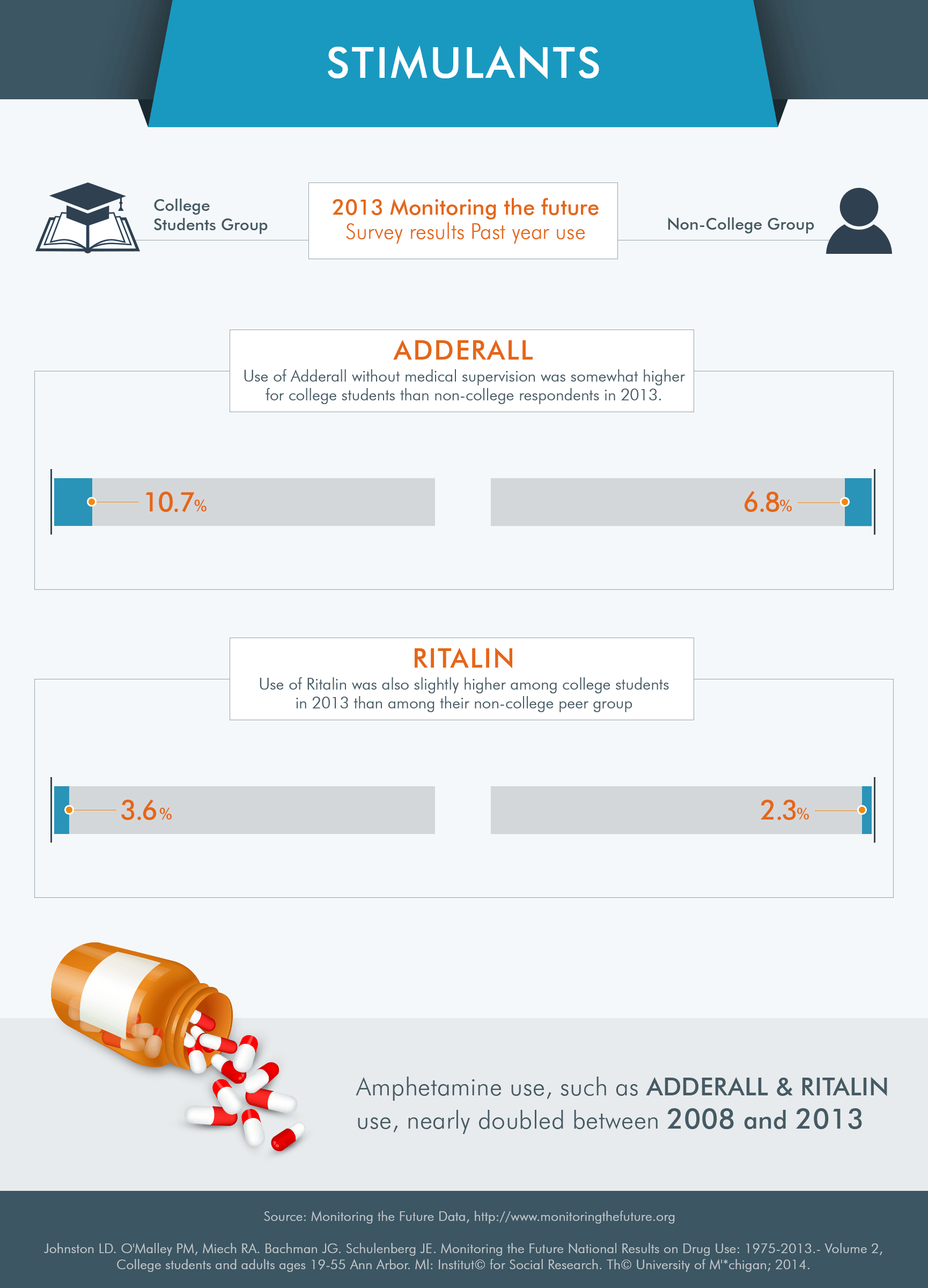 How to Prevent Prescription Drug Addiction

There are ways to tell alcohol use or use of other drugs has spiraled out of control. These are the typical signs.

The infographic below summarizes the most common signs of drug abuse. 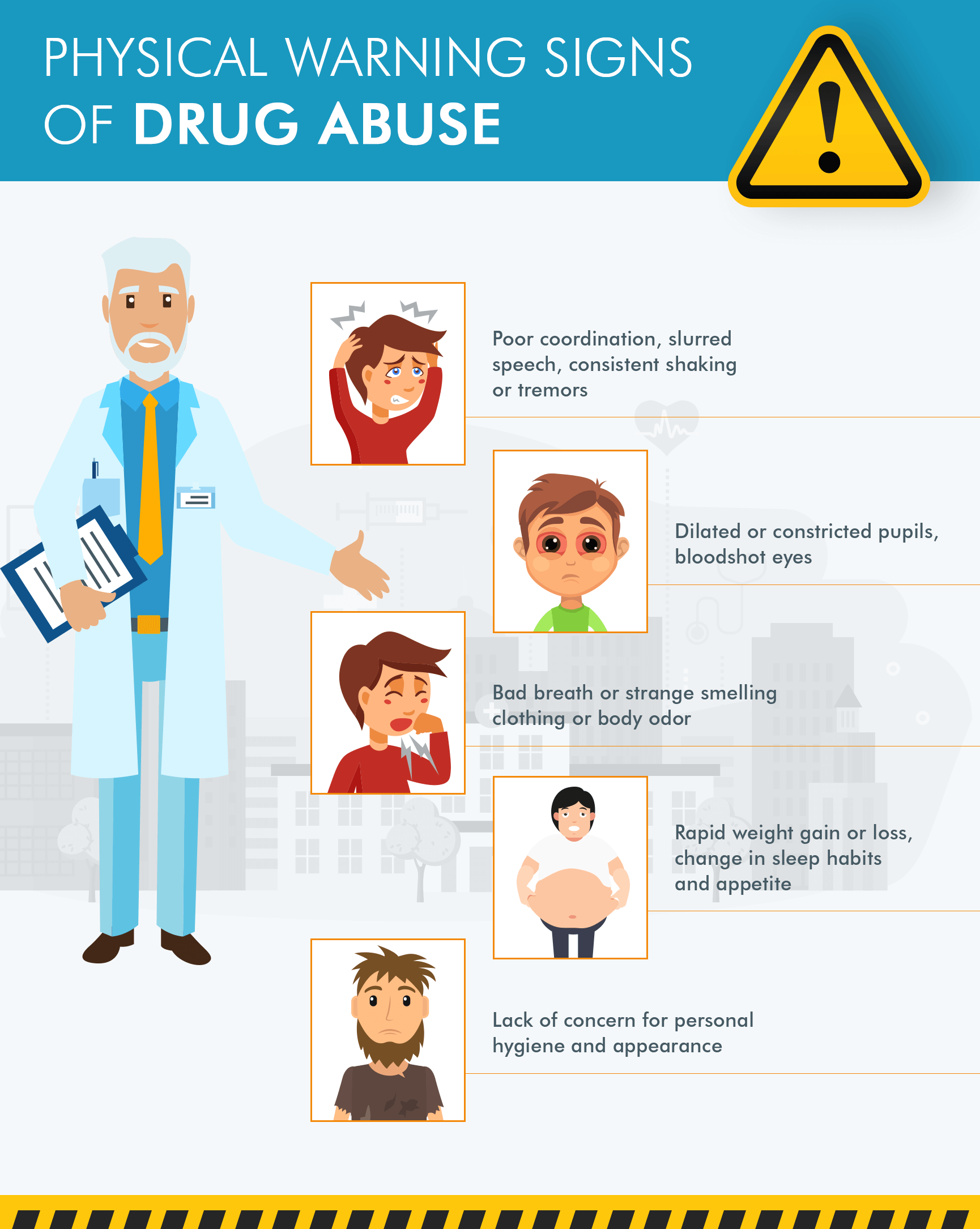 Where Can College Students Get Help?

The above warning signs may indicate a student has a drug or drinking problem and needs professional help. They are advised to speak to a college counselor or local health center staff. Contacting an expert will help prevent addiction even in the case of severe abuse.

When a person realizes that they need help, they are encouraged to seek such only from a trusted drug rehab facility. These facilities’ programs often involve family members in the recovery process. A professional counselor will explain how the treatment can be expected to affect the education process. He or she will work with the student to make sure they aren’t falling behind at college, because this can have very negative effects, including relapse. Outpatient drug abuse centers make it possible to combine rehab and studies because the program is tailored to the student’s schedule.