Sonata is a non-benzodiazepine hypnotic and is in the same group of sleep aids as Lunesta and Ambien. However, Sonata is more often abused by those looking for a way to feel euphoric or relaxed.

Sonata affects the neurotransmitters in the brain, slowing down function, and allowing patients to get a good night’s sleep. It is prescribed most commonly as a sleep aid, as it is highly effective as a treatment for insomnia. While Sonata isn’t as widely abused as some other sedatives, namely those in the benzodiazepine category such as Xanax or Lithium, Sonata may still become addictive when consumed in high enough quantities or for a long enough period of time. Some patients have shown to develop a tolerance to the drug, requiring higher dosages in order to achieve the same results as they experienced when first taking the medication.

Sonata abuse is classified as any use of the medication not prescribed by a physician. It is currently classified as a Schedule IV controlled substance.

Additionally, Sonata is one of the fastest acting sleep aids currently available. Its half-life is only an hour, meaning its peak effectiveness happens relatively quickly. This makes it especially easy for overdose and more severe side effects.
Unlike Ambien and other medications linked in with Sonata, its effects are often more pronounced. Patients who overuse the drug report feelings of elation or euphoria, followed by feelings of “blackouts.” These periods are often time spans when users don’t remember anything they do or who they are with. Hallucinations are also possible while on Sonata.

What are the effects of Sonata abuse?

Effects of Sonata abuse can include:

In some cases, troubling events occur with those who abuse Sonata. These may include:

Most users have no recollection of these events once the drug’s effects have worn off.
Those looking to get high from the use of Sonata often empty the contents of the capsules and nasally inhale the powder inside. This gives an even faster and more intense “buzz” than taking the capsules orally, although the blackout and crash may also happen more quickly and more intensely.
In many cases, those who abuse Sonata also take other drugs or drink alcohol. While Sonata may hinder some of the stimulant effects of drugs like cocaine, it will intensify the effects of alcohol and other “downers.”
Sonata is also known as sleepeasy, downers, or tranks.
Side effects of Sonata abuse may include:

In very severe cases of overdose, which almost always occurs when using Sonata with another drug or alcohol, respiration may be slowed to the point of respiratory failure and potentially even death. 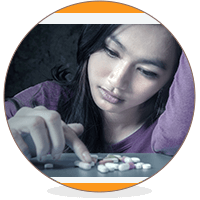 Sonata is prescribed for insomnia, and sometimes for certain anxiety disorders. Therefore, those who have these conditions are more likely to abuse this drug and other sleep aids.
Veterans and others who have endured stressful or traumatic events are more likely to suffer from anxiety and similar disorders, which also increases their risk of drug abuse.
This is also true for those who have professional careers with highly stressful situations or circumstances.
Who are at risk of Sonata addiction?
The people who are at risk of becoming addicted to Sonata include:

Others who might also be at higher risk of abuse and addiction of Sonata include:
Those who abuse other drugs – Drug abusers and addicts often mix various substances in order to get the effect they are going for. Sonata is commonly combined with alcohol to intensify the effects of both. It may also be used as a downer to counteract the stimulant effects of other drugs, such as cocaine or heroin. Most people who become addicted to Sonata use it alongside another substance.
Those with mental health issues – Many people who abuse drugs or wind up addicted do not set out to get high for recreation. They are often people who are in pain, and who wish to self-medicate. They may begin using a sleep aid to help them combat insomnia or anxiety, and increase their dosage slowly to increase the effects, or to keep the effects consistent.
Teens and youth with parents who take Sonata – In some cases, young people will begin taking a particular drug because of its easy accessibility. Those with parents or other relatives taking the drug may be more likely to try it. Teens with little supervision and a family history of drug use are also at a higher risk.

In many cases, the signs of Sonata abuse are difficult to discern between using the drug as directed, since Sonata is rarely considered truly addictive. While it can be abused, true Sonata addiction isn’t all that common. One way to tell if a loved one has an addiction is tolerance to taking the medication. It eventually may become more difficult to achieve the results desired by taking the recommended amount, so more may be needed. Feeling symptoms of withdrawal upon stopping the medication may also signal abuse, as well as an intensified case of insomnia when the medication is stopped.

There were over 60 million sleep-aid prescriptions filled in 2011.
Those that take sleep-aid medications have nearly 45% higher chance for developing certain infections.
Using Sonata can lead to severe allergic reaction.

When addiction does occur, getting proper treatment is of the utmost importance. It is generally better to stop taking Sonata under the direct supervision of a medical professional, as suddenly stopping can result in severe side effects. Potential issues which may arise when one stops taking Sonata include:

These problems must be monitored and treated by a doctor, should they occur. This is most easily accomplished when treatment is sought from an inpatient rehabilitation center. They are generally more extensive in their treatments, combining medical interventions with counseling and peer support.
Those who attempt to quit on their own may suffer severe consequences during withdrawal. They are also more likely to relapse.
Although patients may also seek the help of a trained drug counselor, those who attend inpatient facilities have a higher success rate in terms of staying clean over the long haul.
Additional treatment methods, such as support groups and outpatient counseling are generally recommended for follow up sobriety maintenance.

How to break a Sonata addiction?

Breaking the addiction to Sonata can be accomplished when treatment is conducted in an inpatient rehabilitation center. Quitting Sonata can trigger severe side effects such as convulsions, hallucinations, and seizures, and these symptoms are best managed by medical professionals and specialists.