Kratom Addiction: What Is The Plant’s Abuse Potential?

Kratom, a tree originating from Southeast Asia, has been used for hundreds of years to treat different conditions, in socio-religious ceremonies, and to improve work productivity and fight fatigue. Today, it can be found as Kratom supplements to treat digestive issues, chronic pain, and help those dealing with opiate withdrawal symptoms.

Kratom or Mitragyna speciosa belongs to the Rubiaceae family, and it is a tree with origins in Southeast Asia. The tree can reach 16 meters, and its leaves have medicinal and recreational properties. The leaves of the tree can be chewed fresh or can be dried and made into a tea with an earthy flavor. However, the DEA has listed it as a drug of concern being illegal in some US states, and the FDA has not approved kratom for any medical use.

Because kratom legality is still uncertain in many US states, it can be bought online or on the streets. It can be found as powdered or crushed dried leaves, of a dark green or beige-brown color, but also as pure kratom or mixed with other extracts to potentiate kratom. The drug is available as capsules, tincture, powder, or extracts in the form of a paste. The plant is stored in a cool place like a fridge or drawer without heat and light.

The plant is very dangerous as it can easily be misused and with a high risk of addiction. Many users mix kratom and alcohol to increase the effects of the drug, not knowing that there is a high risk of overdose.

Kratom scientific name, Mitragyna, was given by Dutch botanist Pieter Willem Korthals who formally documented it at the beginning of the 19th century. Mitragyna comes from the word “mitre,” the ceremonial headdress of bishops because the leaves and the stigmas of Mitragyna speciosa flowers resemble the shape of a mitre.

There are other names for kratom such as:

Those who buy kratom illegally on the streets, often use the above-mentioned terms outside their original locations. That’s why it is possible to face these nicknames in the US, too.

Pharmacology studies show that Mitragyna speciosa has more than 40 alkaloids, but the only kratom alkaloids responsible for the effects of this plant are mitragynine and 7-hydroxymitragynine.

Animal studies have demonstrated that mitragynine has an activity similar to an opioid. It inhibits electrically stimulated ileum, resulting in reduced pain response. It also promotes smooth muscle contraction and inhibits gastric secretion. Mitragynine is mostly found in the leaves. Mitragynine also has analgesic effects, thanks to its opioid agonist properties. At low doses, the alkaloid is relatively safe, but at higher doses it becomes toxic. Unfortunately, it is impossible to exactly define the dose threshold for kratom overdose. 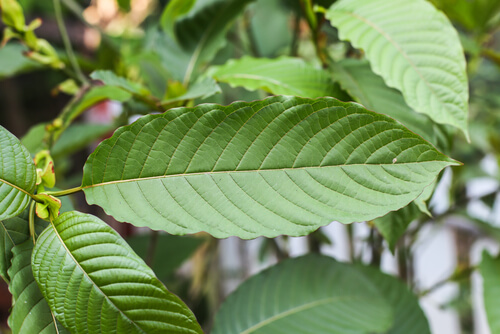 7-Hydroxymitragynine is the second most active kratom alkaloids also mostly found in the leaves of the plant but in very small amounts. This alkaloid has potent antinociceptive activity, being a significant contributor in the plant’s analgesic properties. At the normal levels found in the leaves, 7-Hydroxymitragynine does not imply any danger, but at high doses, it has opiate-like effects that could lead to life-threatening risks. Studies also found that this alkaloid is more potent than morphine due to its capacity to go through the blood-brain barrier.

These alkaloids in kratom act on the mu, delta, and kappa receptors in the body. Therefore, they are used to managing many conditions. It should be noted that these alkaloids can be detected in a urine or blood kratom drug test.

Does Kratom Have Caffeine?

The kratom drug class is stimulant, the same as caffeine. But although coffee and Mitragyna speciosa have a lot of similarities (both being from the same plant family), the second does not contain caffeine. In small doses, Mitragyna speciosa functions mainly as a stimulant, having effects similar to caffeine, but lacking the well-known jitteriness resulted from several cups of coffee.

Some kratom supplements may contain adulterants (such as caffeine) to boost its effects. In Thailand, it is reported that the plant can be consumed mixed in iced caffeinated soda or with cough syrup, which contains codeine resulting in a drink known as 4×100. In Sweden, a product called Krypton, has in its composition Mitragyna speciosa products, caffeine, and O-desmethyltramadol (a bioactive metabolite of tramadol). These beverages have unpleasant kratom side effects and are very dangerous. Deaths have been reported after consuming them. Such mixtures should be avoided.

Because this drug is seldom monitored by national drug abuse surveys, there is little information on kratom abuse. Studies made on rats and mice have shown the high abuse potential and adverse cognitive effects of the plant.

The drug might be abused while being used for achieving kratom high, and so appeal to people who believe this is safer compared to illicit drugs, teenagers, and young adults. Still, Mitragyna speciosa has no approved uses and poses a high risk of overdose and other health concerns as illegal drugs. People could also abuse the plant while using it during withdrawal from opioids, morphine, or heroin, but also as a treatment for anxiety, depression, cough, pain, and other conditions.

At higher doses, pure kratom offers an analgesic and sedative effect, desensitization to emotional and physical pain, comfortable pleasure, and a feeling of calm. Because getting these effects requires large doses, this increases the risk of drug abuse. Many users even mix kratom and weed to enhance the experience and effects, a combination that might lead to life-threatening effects.

Because the plant has opioid-like effects, developing kratom addiction is possible, which means users will experience physical and psychological withdrawal symptoms when they try to quit the drug. 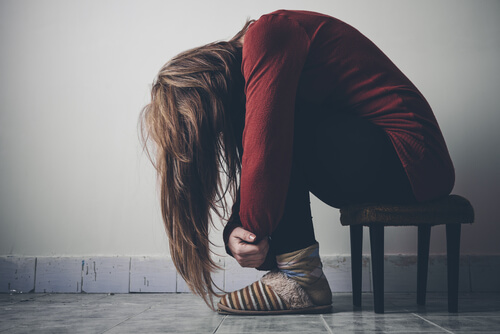 How Addictive Is Kratom?

Mitragyna speciosa products are not regulated by the FDA, so there is little information on how potent any given amount of the drug is. Users on various drug forums confirm that kratom addiction starts gradually if consumed twice or thrice a week, but individual cases might vary. Also, since there are various kratom strains with different potency levels. For those who use only one type of strain, addiction will set in faster. There is a high risk of addiction for those who use ultra-enhanced extracts which are highly concentrated.

For now, there are no approved ways of how to take kratom to avoid addiction. However, the research indicates that consuming more than 10 g per day will lead to rapid addiction.

How Long Does It Take To Get Addicted To Kratom?

A study published by the National Institute on Drug Abuse analyzed a group of Thai individuals who used the plant for a long time. When stopping the drug, the individual experienced kratom withdrawal symptoms. The conclusion of the study was that kratom addiction sets in after a long period of usage in the case of leaves that are chewed. Addiction can occur faster when tinctures, resins, and extracts are used.

Addiction settles in when a certain dosage no longer offers the mood-boosting effects experienced until then. At this point, the user will increase the dosage of the drug, causing addiction.

Kratom addiction treatment takes place in three phases: physically stabilizing the user, therapy, and recovery. Physical stabilization implies detox, which is performed in a specialized facility, where the individual benefits from medical surveillance and medications. The therapy and counseling will be offered either in a residential or outpatient setting, depending on each individual and the results of their physical detox. Addiction treatment in such centers ensures long-lasting recovery.

There are also kratom alternatives that can be tried to avoid the addiction issue. Some of these options include drugs that contain hydrocodone, oxycodone, oxymorphone, or codeine, which can only be given on prescription after consulting a doctor.

Between Good And Bad

Although there are kratom pros and cons, having a final report from the DEA is critical. While there are no approved kratom medicinal uses, the status of Mitragyna speciosa, makes this drug dangerous for the users. Self-medication poses numerous risks. To prevent developing an addiction or any other side effects, it is best to abstain from using such remedies and consult a doctor.

Those who have already developed an addiction to the substance or notice abuse signs should know that there are numerous drug rehab centers specialized in drug abuse and addiction and recovery specialists who can help. A trusted addiction professional will be able to offer the path towards recovery and a life free of addiction.