Addiction Resource » Drugs of Abuse » What Are Designer Drugs?

What are Designer Drugs? Dangers of New Psychoactive Substances Addiction

Designer drugs are chemicals that are manufactured in a laboratory to imitate the effects of commonly abused illicit drugs. They constitute a substantial portion of the illegal drug trade. In most cases, the molecular structure of a well-known existing illegal drug is modified to create an entirely new drug that produces similar effects. As cited in the report published in the Journal of Urban Health, the lifetime use of any single designer drug lies at 15% or below. This means that the extent of the use of these psychoactive drugs is high. Because of these statistics, it is necessary to learn the dangers of these substances.

What Are Designer Drugs?

In terms of designer drugs definition, according to the National Institute on Drug Abuse, the word designer is used because these compounds have been created or “designed” through alterations in a pre-existing chemical structure. Designer drugs or legal highs refer to new psychoactive substances manufactured by underground chemists in secret laboratories for sale on the black market.

Some of These Designer Drugs Include the Following:

The mechanism of action of these substances is similar to the traditional drugs of abuse like opium, cocaine, and heroin but their side effects are more severe. Furthermore, most designer drugs or club drugs have unpredictable and dangerous side effects but these substances do not provide the same addiction level as cocaine and opium. They are more powerful substances with a very high potential for addiction. When used in combination with other illicit substances and alcohol, they can pose fatal results.

What Are The Types Of New Psychoactive Substances

The manufacture and distribution of synthetic analogs of controlled substances is a growing international concern. Underground chemists synthesize these compounds in secret labs with legally available raw materials. This is done to exploit loopholes in controlled substance legislation. Additionally, designer drugs have psychotropic effects and are marketed for recreational use, often under misleading or inaccurate packaging.

New Psychoactive Substances Can Be Broadly Categorized as Follows:

Take note that there are hundreds of dangerous designer drugs on the market. Some of the synthetic stimulants or hallucinogens that have gained popularity among drug abusers are listed below:

It is difficult for law enforcement agencies to control the production of illegal designer substances in clandestine laboratories. In a case report of medical doctors from Minnesota, these powerful compounds have dangerous physical and psychological effects and some new psychoactive substances are far more potent than the substances they are meant to mimic, thereby increasing the chances of a fatal overdose. For example, designer drugs of synthetic cannabinoids type are more potent than cannabis. In addition, minor errors in the manufacturing process by self-proclaimed chemists can result in substances that are far deadlier than the intended compound. 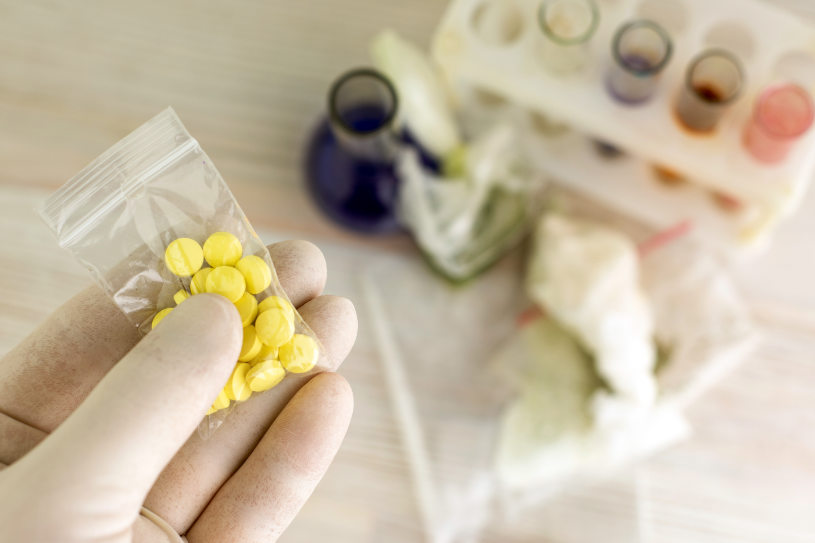 In the United States, the Drug Enforcement Administration (DEA) regulates the use of controlled substances, including illegal substances and prescription medications with a potential for abuse. The Controlled Substances Act prevents the sale, distribution, and use of dangerous scheduled drugs. Manufacturers of synthetic compounds are liable to criminal prosecution if the designer drug is proven to be pharmacologically or structurally similar to an already-identified illicit substance.

Illegal drug manufacturers and drug users are always looking for ways to circumvent the law. Club substances are created as a loophole to evade regulations and prevent detection on routine drug testing. These new psychoactive substances are chemically similar to illegal substances, but the manufacturers constantly change their chemical structure to avoid criminal prosecution. For example, in 2011, the DEA issued a Schedule I status on the compounds that were sold as bath salts. Thus, illegal manufacturers designed functional groups, formulated new substitutions, and altered the moieties and dosage form of compounds and substances to avoid the said prosecution.

What Are The Effects Of Designer Drugs

Although it is already known that the effects of designer drugs are more potent and can cause more severe toxicity than the substances they mimic, take note that these effects vary depending on the type of club substances.

Same from the source above, the most fatal physical side effect of substituted cathinones includes cardiac arrest. In case these side effects are being observed in a drug user, it is highly advised to seek help through resources like rehab centers.

Researchers from Baltimore report that the psychological effects of substituted cathinones appear similar to amphetamines and cocaine. Some of these psychological include the following:

According to a study published in the Journal of Addiction Medicine, the hallmark of substituted cathinones toxicity is acute agitation. So, if the patient consumes larger doses of these bath salts, those side effects mentioned above will appear severely along with toxicity.

Scientists from Virginia report that the physical side effects of synthetic cannabinoids are similar to the side effects of cannabis and they may appear 10 minutes after administration. Some of these include the following:

In one case report of surgeons from Texas, bradycardia and hypertension with chest pain may also be experienced with the use of synthetic cannabinoids. Although this is rare to occur, it may lead to fatality.

Because the chemical structure of synthetic psychoactive substances is constantly changing, there is no specific antidote available for these compounds.

In a study published in the Journal of Psychopharmacology, the side effects of synthetic hallucinogens start to peak 20 minutes after administration and may last for 3 to 13 hours.  Some of the physical side effects include:

In the same report, it was stated that these physical side effects may also last for several days. In case this happens to the users, it is highly advised to seek medical help to safely manage the side effects and prevent future health dangers.

Violence is the most severe and dangerous side effect of synthetic hallucinogens because users do not only harm themselves but may harm others as well. Other psychological effects of these types of substances include:

Many users who experience these side effects, especially visual and auditory hallucinations may require medical attention and services as these effects can lead to psychiatric consequences. 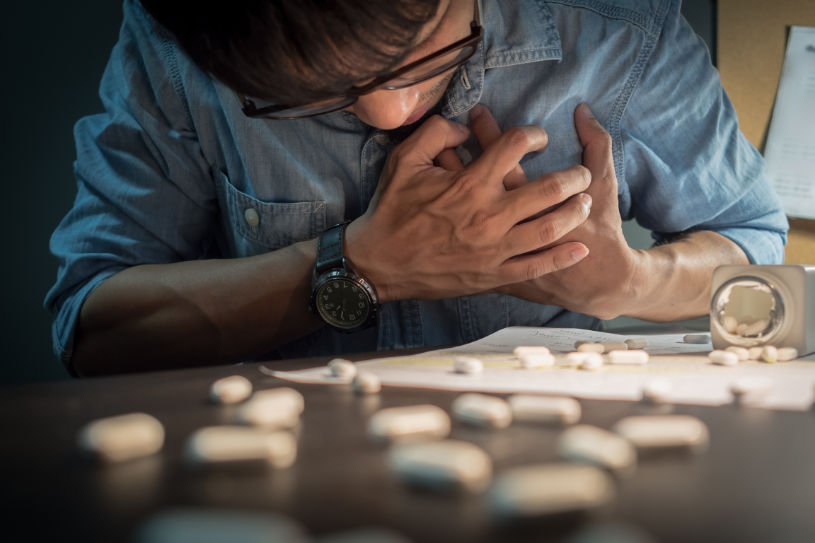 The United Nations Office on Drugs and Crime reported in 2014 that the use of legal highs has increased significantly at national and international levels in the past years, additionally stating that designer drug addiction and abuse is highly possible for users of these substances. As published in the Journal of Pharmacy Practice, these substances are very toxic and dangerous that may require patients to seek emergency services.

Keep in mind that aside from addiction and dependence, tolerance is also associated with the use of new psychoactive substances, leading to severe health dangers. Because of this, it is highly advised for drug users to seek medical resources as early as possible to avoid the occurrence of unwanted events.

Who Is at Risk of Abusing Lab-Synthesized Substances?

According to a study published in the Journal of Drug and Alcohol Dependence, young adults are most likely to use these substances which are usually available at clubs, parties, and raves. Certain products are popular in niche populations, such as university students (SCs and bath salts), rave party-goers (ecstasy), and in the military.

Young people are attracted to new psychoactive substances because of clever marketing and easy availability. The attractive and colorful packaging of these products and their widespread accessibility, both online and over-the-counter, make it easy for the youth to experiment with legal highs.

Some psychoses due to new psychoactive substances may require prolonged inpatient rehab and behavioral therapy, especially in patients with co-occurring psychiatric disorders.

The psychoactive drugs act on the nervous system to mimic the effects of traditionally illicit substances. Thus, repeated dosing of these dangerous substances promotes long-term health effects especially in the heart and brain of the user. Since dependence is also associated with legal highs, withdrawal can occur.

How Long Do New Psychoactive Drugs Stay In the System?

Again, how long new psychoactive drugs stay in the system depends on their type. This means that substituted cathinones, synthetic cannabinoids, and synthetic hallucinogens have different half-lives. Take a look at the information below:

From the information above, it can be noted that the duration of the effects of designer drugs does not depend on their half-lives. This simply means that these substances are too potent and dangerous to take.

Scientists state that illicit drug manufacturers have the advantage of considerable flexibility in changing the molecular structure of designer drugs. This makes it difficult to detect these compounds and their metabolites on routine drug screening. It is impossible for standard urine and blood tests for illicit substances to detect all the designer drugs that have been synthesized and placed on the market because of the drugs’ heterogeneity. This poses a major challenge for law enforcement officers and clinicians. Although laboratory tests are expanding, the constantly changing content, concentration, and chemical structure of new psychoactive compounds make it difficult to identify these drugs on laboratory tests. For example, substituted cannabinoids come with a lower risk of detection.

What are the addiction treatment services for new designer drugs? The majority of non-psychiatric symptoms are self-limited and resolve with supportive treatment over a few days. Psychological side effects such as agitation, paranoia, and anxiety are managed with monitored observation. Severely intoxicated patients may require pulse oximetry, continuous cardiac monitoring, and frequent neurologic checks. However, some users refuse to seek help due to privacy issues. Furthermore, withdrawal symptoms of designer drugs are not usually severe or life-threatening and are typically limited to irritability and nausea. Supportive care with antiemetics and intravenous fluids may be all that is needed. Healthcare personnel at addiction treatment facilities can manage more severe symptoms, such as agitation and seizures, with medications while keeping the patient’s privacy.

An important component of the treatment for designer drug addiction is advising patients about the grave dangers of these compounds. Education is the cornerstone of confronting the challenges presented by new psychoactive substances. Accurate information about the potential risks of these products and gentle encouragement to make healthy choices can go a long way in helping drug users make informed decisions about changing their behavior.