What Is Salvia Divinorum? Discussing Its History And Properties

The Salvia Divinorum plant is one of the naturally occurring plants indigenous to Mexico. Salvia, the drug was first discovered in 1939 by Jean Basset Johnson.However, what sets salvia apart from thousands of other naturally occurring plants in the region are its unique psychoactive properties. These salvia psychedelic properties make people largely question the risks associated with this substance. People are growing incredibly concerned about the misuse or abuse of the salvia drug, and wish to be fully educated on facts about salvia drug to understand the risks. Many are also wondering how to take salvia and if there’s a safer way. However, it is not safe to do without medical supervision.

The Definition Of Magic Mint

Divinorum is a common and popular plant that mainly grows in the Tropical Montane Cloud Forests in the Sierra Mazateca of Oaxaca, Mexico. Occurring in damp, moist, and shady areas, this unique plant has some distinctive psychedelic and psychoactive effects when consumed in any way.

In the regions where the plant is found naturally, it can grow up to a meter tall. The most accepted salvia description is a long, slender, slightly squared stem that is hollow from the inside, with bright green and large leaves when healthy. The plant also occasionally grows some white flowers that sport beautiful, purple calyxes on the inside.

The drug is one of the most potent hallucinogens, and it is considered a “drug of concern” by the FDA. Despite the popularity as the “legal high” among recreational abusers, it has no proven therapeutic and medical benefits.

The native shamans of the Sierra Mazateca have been using different types of salvia plants to provoke characteristic hallucinogenic high effect. The usage of the plant has been linked to religious experiences, meditation, and spiritual and physical healing.

Salvia, as a drug, is a hallucinogenic drug that produces a wide range of psychedelic effects. In fact, Salvinorin A that is responsible for notorious mind-altering effects, has been deemed the most potent of all naturally occurring hallucinogens. Many recreational abusers are comparing salvia vs DMT in terms of effects strength.
Currently, the Drug Enforcement Authority in the US considers Diviners Sage to be a “drug of concern” and has been contemplating declaring it as a Schedule 1 controlled substance due to its potential for abuse and the possibility of lethal salvia overdose. 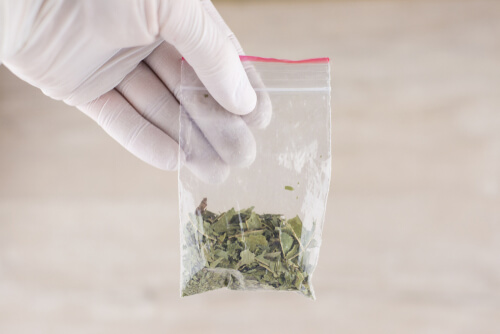 There are many street names used by communities around the globe. Some of these are:

The Mechanism of Action (MOA)

The mechanism of action is quite unique. Unlike other commonly used psychedelic drugs that majorly bind to serotonin receptors, Salvinorin A doesn’t bind to more than 50 receptors, proteins, and ion channels. Seer’s sage shows a high specificity for a sub-type of opioid receptors – kappa-opioid receptors. The substance is considered to be a full agonist, which means it blocks all the activity in KOR (kappa-opioid receptors). 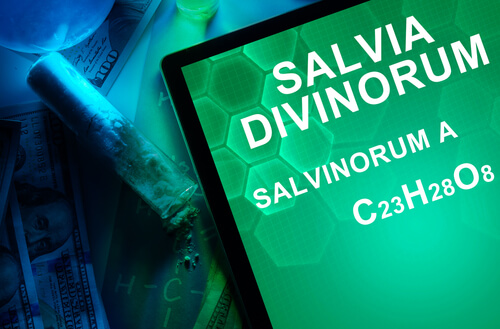 Salvia acts as a selective agonist of opioid receptors. It binds with the kappa opioid receptors in the brain, blocks the activity in receptors, and induces psychoactive effects. As a result, it tends to bring unique hallucinogenic effects that cannot be compared to other drugs of the same family. Some salvia side effects include mixed sensations, feeling detached or disconnected from one’s environment, intense mood swings, and sweating.

Commonly, with drugs that produce a hallucinogenic effect such as magic mint, the tendency to develop an addiction is a concern. Salvia dosage might also pose a problem.
Unfortunately, due to the lack of proper research, it cannot be clearly stated if it is addictive. However, the dependency is not the only risk associated with the use of magic mint. Dangers that may arise during the salvia trip is another thing one should be very cautious about. Is salvia legal? It is, this why it can pose a danger for those who misuse it.

As with all the hallucinogens, S.Divinorum may pose a great danger for the physical and mental health of the abuser.

The problem with salvia usage among the underage population is also a big concern. The reason is the lack of substantial evidence that supports the presence of long-term negative health impacts as a result of abuse. Still, there is a possibility to develop, at least, a psychological addiction to substance. As soon as addiction becomes obvious, it is vital to reach out the specialists for initiating the addiction treatment process. Another concerning point is that one of the most popular ways of administration among teens is salvia mixed with weed.
Though developing an addiction to the diviner’s sage has not been scientifically proven, and there is still room for research concerning the mechanism of action, one should be concerned if they find a friend or family looking where to get salvia. Also, there is a special salvia drug test to detect whether they have taken it or not. In this case, it is important that the individual seeks professional medical help. Cases of abuse and dependency should never be taken lightly and must be treated in a rehabilitation facility if needed.