Yoga — Why it’s Great for People Recovering From Drug Abuse

Yoga is one of the new adjunct treatment approaches that has achieved rave reviews for its benefits. Amazingly, using Yoga in addiction recovery is not only effective but it’s also easier on the wallet. The benefits of Yoga for recovering addicts is something that every recovery program should know about.

Prescription and illicit drug abuse is a looming health problem in the US. In fact, it is a major cause of rising healthcare expenses, a general deterioration of health, as well as socio-economic issues. There are various approaches to treating drug abuse. These include medication-assisted detox, controlled drug therapy, counseling and other psychiatric support.

What Is Yoga And What Is The Point Of Practicing It?

Yoga is an ancient Hindu philosophy that focuses on and combines physical, mental and spiritual aspects of an individual. This is achieved through different exercises known as yoga poses (asanas). However, the true nature of yoga comprises more than just the physical exertion of the postures and the mental concentration of meditation.

Much of the philosophy behind yoga, which is comprised of the eight limbs of Ashtang yoga, espouses concepts like moral principles, striving toward self-awareness, and mental focus. The concepts of yoga most familiar to Western culture are the limbs that emphasize posture (asana) and meditation (dhyana).

Hatha yoga is the form of yoga most commonly practiced in the West. Hatha yoga combines the physical exertion needed to maintain various poses along with the mental finesse to concentrate on prolonging the pose.

Although there are some elements of meditation involved in Hatha yoga, it places more emphasis on physical fitness and breathing exercises to achieve therapeutic effects. Another more meditative form of yoga, Raja yoga, attempts to rein in the mind from its impulsivity through the mental scanning, if one will, of trouble spots in the body that cause undue stress.

How Is Yoga Beneficial For Addiction Recovery?

A melding of the various physical and mental techniques involved in the different forms of yoga has been shown to have the most positive effects, physically, mentally and emotionally. The belief that yoga is also a spiritual pursuit helps increase its effectiveness in terms of bestowing a more relaxed mental state onto the one practicing it.

Since most meditation practices involve management of the mind’s energy and impulses, practitioners of yoga and meditation experience greater mood stability in the face of outside pressures. Having a calm mind and being mentally stable can contribute to the avoidance of self-harming behaviors and activities, like substance abuse.

Brain scans performed on substance abusers reveal hyperactivity in regions of the brain that signify a greater propensity to be self-interested and vulnerable to mood and behavioral disorders. Yoga and meditation strive to release a person from the concept of the self, something that goes back to the core principles of yoga.

Practitioners of yoga and meditation display a greater connectivity of all regions of the brain. They are able to achieve a sort of cerebral balance that the brains of substance abusers do not have, since most of their brain activity focuses on satisfying their immediate physical needs (addiction).

Offering a unique combination of physical exercise and relaxation techniques it is unlike most other conventional exercise and meditation trends, as it connects the body with the mind and soul.

It teaches self-control and relaxation that lead to the achievement of ultimate liberation, called “Moksha”.

Though it is relatively new in the Western culture, it has already gained much attention and acceptance over the recent years. As a result, western medical researchers have gradually started to acknowledge its benefits in various fields. These include disease prevention, management, and treatment.

Wondering how stretching the body and breathing deeply can help to recover from drug abuse? Here are some reasons why one should include Yoga as part of a long road to addiction recovery.

What Does Science Have To Say About Yoga?

Its benefits in drug addiction recovery are represented by extremely high numbers. What’s more, a majority of these are backed by scientific studies. If one is a believer of modern science, some of these ideas may be counterintuitive. However, after reading the following findings, hopefully, they will change the perspective and maybe try a yoga pose or two.

Complementary Therapies in Medicine – A 2013 study suggests a promising role of yoga and mindfulness in treating and preventing drug abuse.

Various Yoga poses and associated breathing exercises have an influential role in alleviating the symptoms of stress and mental disorders.

Yoga can also raise levels of GABA – which is shown to reduce stress and anxiety.

It is a well-known fact that drug abuse and mental disorders co-occur in a large number of addicts.

More than 80 percent of yoga users reported reduced stress as a result of practicing yoga.

Studies have revealed that the combination of yoga and psychotherapy is more beneficial than the conventional methadone treatment, even for drugs such as heroin or other opioids.

Yoga reduces stress and anxiety which cause cravings and eventually – relapse.

Rhythmic breathing exercises that are a common part of Yoga can also reduce cravings for nicotine. Researchers are trying to achieve this result in large populations, and in consequence, Yoga may become an effective way to cut down the incidence of tobacco-related cancers.

Yoga can benefit individuals undergoing detoxification for heroin dependence, by enhancing their mood and improving their quality of life.

The integration of yoga and meditation into a single program to help prevent relapses among substance abusers was finally achieved with the creation of the mindfulness-based relapse prevention program.

The main thrust of MBRP is to help people respond to cravings and stress in a healthy, non-destructive way, which means not resorting to chemicals.

The program was initially known as MBSR (mindfulness-based stress reduction). It was taught to individuals suffering from chronic illnesses to help them face their plights with a greater sense of self-awareness and acceptance. The more relaxed people became about their situation translated to lower incidences of relapse.

Yoga poses formed a part of the initial MBSR program, but the MBRP program utilizes easier poses and movements, given the poor physical condition in which some addicts find themselves.

A trial run on the effectiveness of MBRP found that those who had taken part in MBRP had lowered their chances of relapsing compared to those who did not partake.

MBRP leads to a more self-aware state of mind, wherein an individual is able to understand their responses to external stimuli, rather than simply reacting emotionally, which can lead to depressive states and eventual self-medicating. Taken alongside conventional addiction treatments, MBRP can be quite successful in preventing relapses among substance abusers.

In a nutshell, yoga combined with meditation and Western psychological therapies, is an effective, low-cost alternative therapy. Additionally, it promises a better and faster recovery from drug addiction. With favorable results from numerous scientific studies, Yoga is slowly making waves in the medical field. It’s highly probable that over the next few years it’ll become a definitive tool for individuals recovering from drug abuse and addiction.

Listed below are three poses that one can adapt as a routine and then build on with more advanced poses, as they become more confident.

Doing Yoga in the morning is an excellent way to start the day, as body collects and focuses energy on overcoming daily tasks, and eventually getting back to drug-free life.

A Quick Reminder: Wear loose-fitting clothing, choose a silent place and do not eat a heavy meal before starting any pose. If one don’t have an exercising mat, they can use a big towel. Lastly, always do yoga on a flat and hard surface.

Even a 20-minute workout is beneficial to health. Start with simple poses. Once some flexibility and confidence is gained, one can move to more advanced routines that demand more experience. 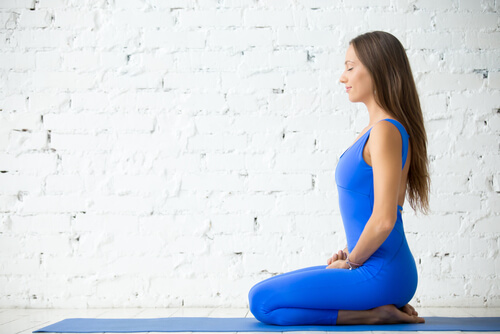 Start by kneeling on the floor.Knees should point forward. For more comfort, one can put a pillow or folded towel under the buttocks. Relax the arms remembering to sit straight and keep the chest open. Focus on breathing and how the air moves in and out of the body. Optional: join the hands together and hold them in front of the chest. Continue this for a few minutes before moving on to the next pose. 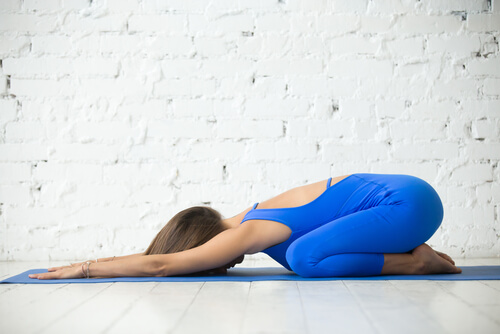 Nothing is more peaceful than returning to that state of childlike innocence. This resting pose stretches the whole body and relieves it of the stress of adult life.

Kneel down with thighs slightly apart. Raise hands over the head and slowly bring them forward to touch the floor with the palms. Keep both arms stretched out towards the mat and continue breathing as naturally as possible. Try to relax all the muscles. Stay in this position for a few minutes. 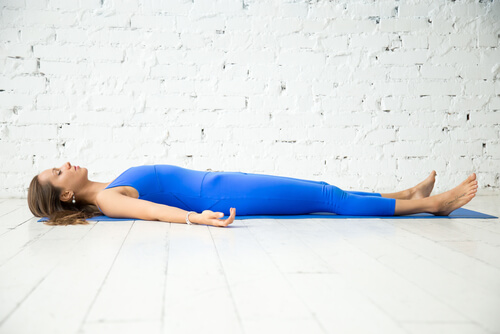 One can do this pose in between sequences of their routine or at the end, as a meditation pose. It is beneficial for those wanting to alleviate stress and symptoms of mild depression. It also helps lower blood pressure and fatigue.

Lie on the back on a Yoga mat and keep legs slightly apart. Lay with arms slightly to the side with palms facing upwards. Breathe deeply and concentrate on breathing – breathe in through the nose, and out with the mouth.
Note: If one has experienced problems with the back or have other medical issues, consult the doctor before starting any yoga exercises.