Prenatal substance abuse is a serious problem all over the world because it exposes not only the woman but also her developing baby to harmful substances. Tobacco and alcohol are the most commonly abused substances, followed by marijuana and cocaine.

In recent years, opiate abuse during pregnancy has shown a worrisome increase. Polysubstance abuse is common among women who are expecting, and this is frequently complicated by co-occurring psychiatric illnesses, pregnancy-related health concerns, and environmental stressors. Addiction during pregnancy is a grave concern because it puts two lives at risk.

Substance use disorders are most prevalent in adolescents and young adults. This puts women of childbearing age (15 to 44 years old) at greatest risk of developing an addiction. Based on this demographic, women who are pregnant or could soon become pregnant are at high risk of substance abuse. In fact, according to a nationwide survey on drug use in 2012, almost 16 percent of pregnant women smoked cigarettes, 8.5 percent drank alcoholic beverages, and nearly 6 percent used illicit drugs.

Every year nearly 2 million babies in America are exposed to tobacco, alcohol, and illicit drugs in utero.​

Why Do Pregnant Women Use Cigarettes, Alcohol, and Drugs?

​Most women, when they find out they are expecting a baby, do everything in their power to ensure a healthy birth. Yet, millions of babies continue to be exposed to harmful substances, including tobacco, alcohol, and drugs, while they are developing in their mother’s womb. What causes a mother to put her baby at risk? Why do pregnant women succumb to substance abuse? Here are some of the most common reasons for addiction during pregnancy.

Substance Use Disorders in Pregnancy: A Statistical Overview​

Substance abuse in pregnancy is associated with a number of serious maternal and fetal health consequences. Nearly 90 percent of female drug abusers are of reproductive age. According to the Substance Abuse and Mental Health Services Administration (SAMHSA), 5.4 percent of pregnant women between ages 15 and 44 are current users of illicit drugs. In pregnant teens (age 15 to 17), the rate of drug abuse is much higher at almost 15 percent. More than 8 percent of women report current alcohol use and nearly 3 percent are binge drinkers. Tobacco use is also prevalent during pregnancy and 1 in 14 pregnant women smokes cigarettes. It is evident that substance use disorders are rampant during pregnancy. Let’s look at some facts and figures about addiction in pregnant women. 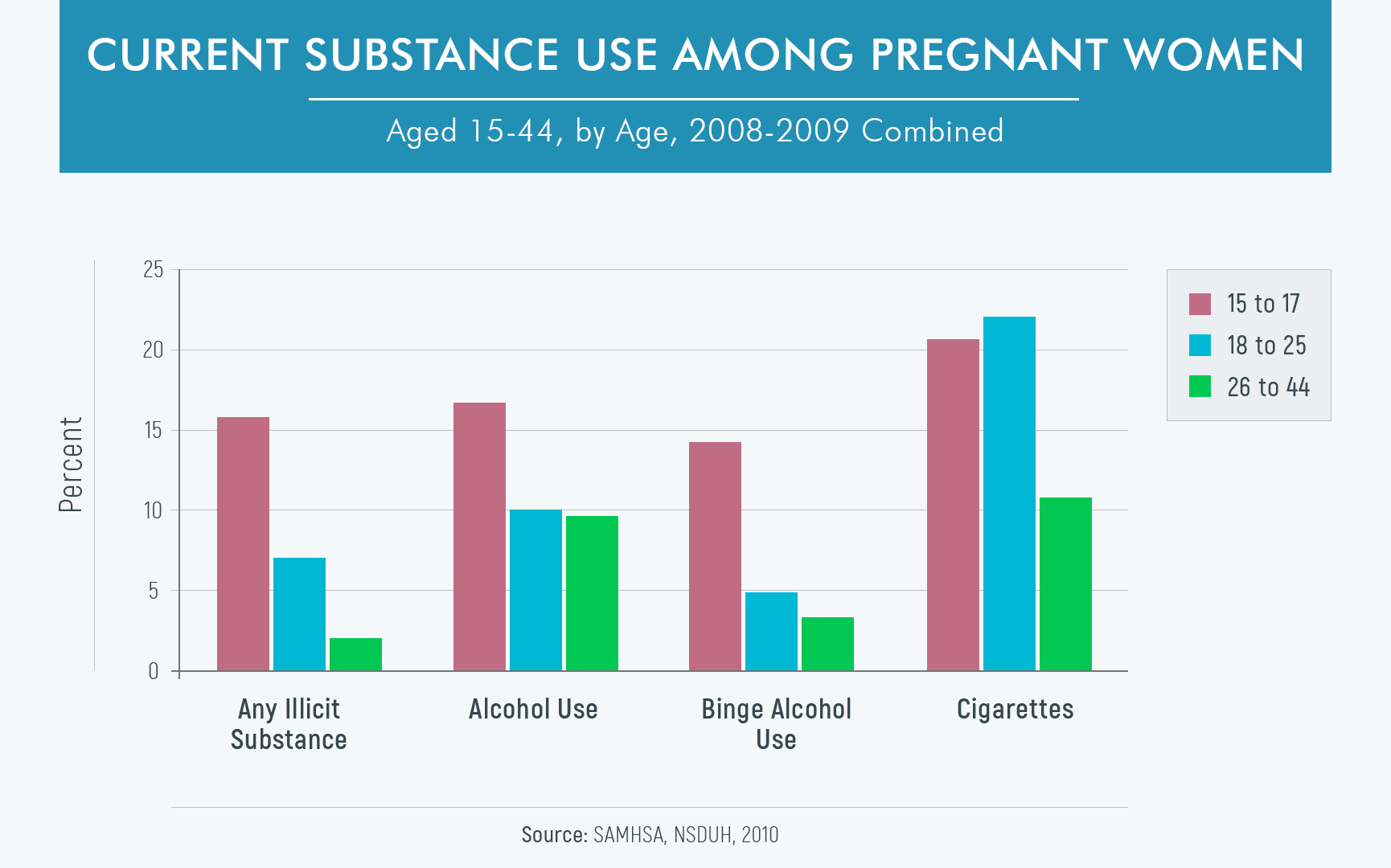 How Does Maternal Addiction Harm the Growing Baby?​

It is well known that there are several serious health consequences for the developing fetus from maternal substance abuse. Some of the most common prenatal effects of various drugs include miscarriage, preterm labor, low birth weight, and a number of developmental problems and birth defects. Pregnant women with addictions is a high-risk group that requires intensive obstetric and neonatal care. Let’s look at some of the most common adverse prenatal effects of tobacco, alcohol, prescription drugs, and illicit substances. 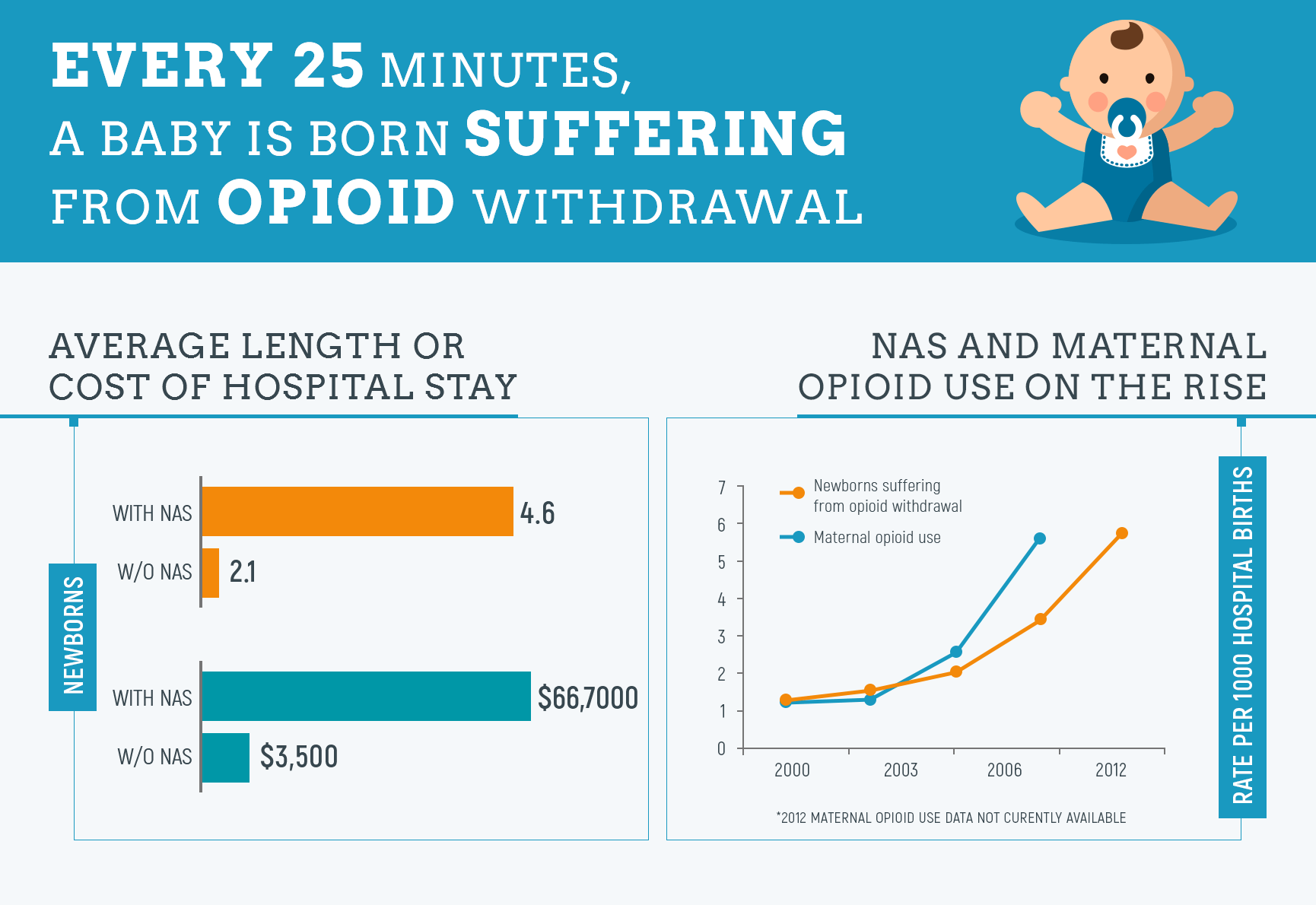 A baby who has been exposed to an illicit substance during fetal life because the mother was regularly using it can be born with a dependence on the substance. This is known as neonatal abstinence syndrome. Maternal abuse of drugs such as opioids (for example, oxycodone, codeine), heroin, and methadone can cause NAS in a newborn infant. It can also be caused by exposure to alcohol, benzodiazepines (sleeping pills), and antidepressants (SSRIs) in the womb. Babies who receive one or more of these drugs before delivery from their mothers are born with a dependence on the drugs. After birth, when they no longer get the drugs, it results in a postnatal withdrawal syndrome.

In 2013, there were 6 cases of NAS reported per 1,000 births, up from 1.5 in 1999. Treatment for NAS often requires pharmacological intervention with medications such as methadone and morphine in up to 70 percent of infants. The treatment protocol can extend for several weeks, depending on the severity of the withdrawal, which in turn depends on the duration of in utero drug exposure.

Fetal alcohol spectrum disorders are a set of conditions that occur in babies that were exposed to alcohol during their mother’s pregnancy. FASD is characterized by growth problems and irreversible brain damage. The severity of fetal alcohol syndrome varies from child to child and depends on the duration and amount of maternal alcohol abuse. According to the National Organization on Fetal Alcohol Syndrome (NOFAS), alcohol and pregnancy don’t mix. Expectant mothers who drink even small quantities of alcoholic beverages are putting their baby at risk of fetal alcohol syndrome.

One in 10 pregnant women reports alcohol use in the United States.

The CDC fact sheet on alcohol and pregnancy states that 3.3 million women in the United States are at risk of exposing their baby to alcohol. Factors that increase the risk of FAS include maternal age, poor socioeconomic status, heavy and frequent drinking, and a family history of alcoholism. In the 1980s and 1990s, the prevalence of FAS in America was estimated at 2 cases per 1,000 births. The CDC reports that assessment of school-going children has revealed a prevalence of 6 to 9 cases of FAS per 1,000 children. A recent study conducted on more than 13,000 children in four U.S. communities found that fetal alcohol spectrum disorders are present in up to 5 percent of first graders.

Women who consume any amount of alcohol while pregnant have a 40 percent increased risk of stillbirth compared to women who do not drink at all.

As more and more states legalize recreational marijuana, the effects of this drug on the fetus are an increasing public health concern. The CDC estimates that 1 in 20 women in America uses marijuana while pregnant. Studies reveal that reducing the use of illicit substances substantially reduces the risk of abortion.

Any infant born before the 37th week of pregnancy (about three weeks before the due date) is considered premature. Premature infants have a number of problems, including low weight, breathing troubles, and difficulties with eating and drinking.
Prescription drug abuse in pregnant women may result in premature rupture of membranes. Babies born to mothers who abuse illicit drugs such as cocaine during pregnancy have a higher rate of prematurity.

Women who consume seven or more alcoholic drinks per week while pregnant are more than 3 times likely to deliver prematurely. 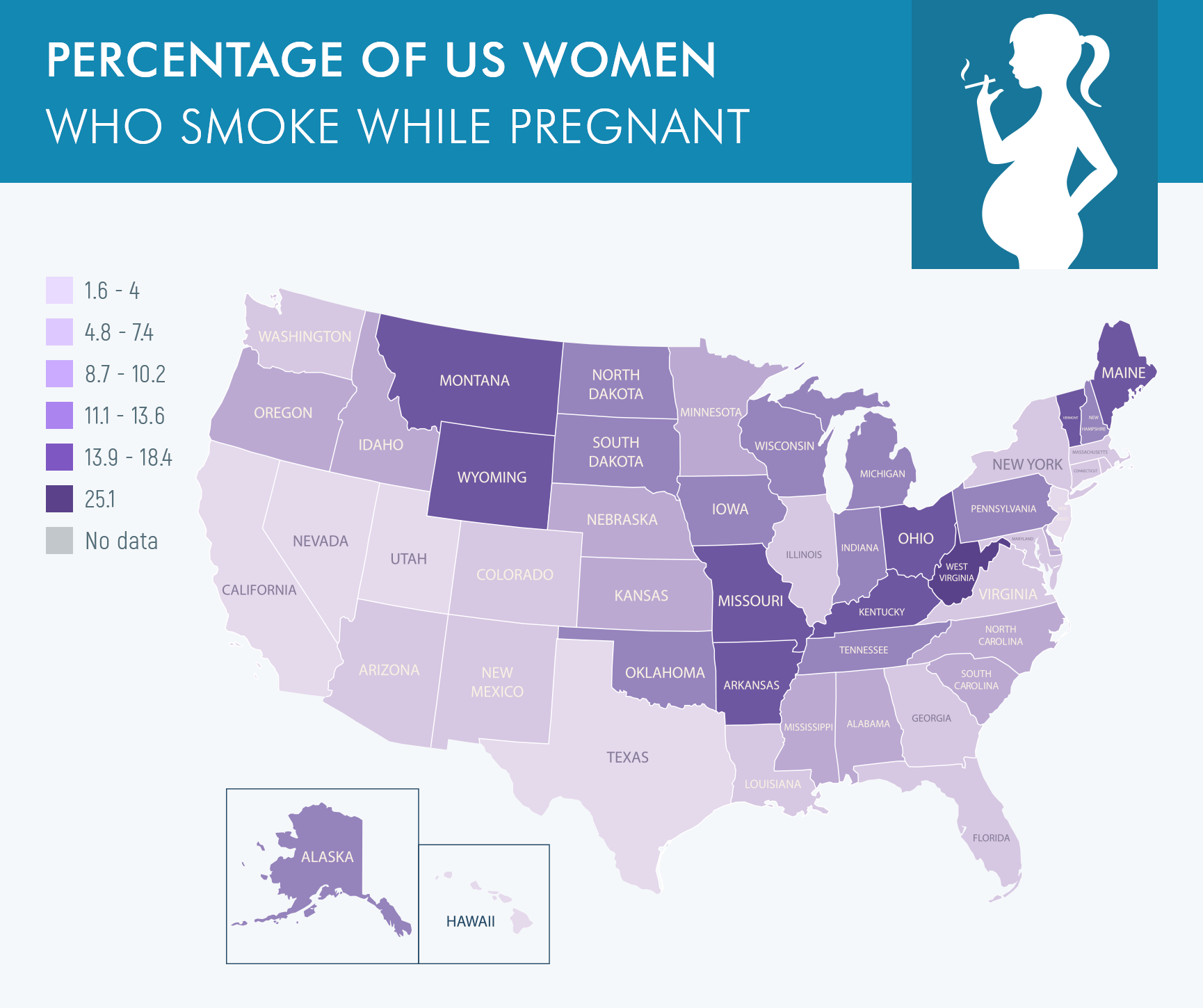 A large number of women who use alcohol or drugs during pregnancy are poly-substance abusers. Maternal substance abuse is closely linked to child development. Many different physical, behavioral, developmental, cognitive, social, academic, and vocational problems are noted in the children of women who abuse drugs and alcohol while pregnant.

According to one study, more than 30 percent of women who abused methamphetamines during their pregnancy reported having a child with a physical or mental disability.

Prenatal marijuana use is associated with a significant increase in impulsiveness, hyperactivity, inattention, and delinquency in children aged 10. Prenatal exposure to MDMA and other recreational drugs is associated with poor mental and motor development in infants at 1 year of age, with the severity of the disorder being heavily dose-dependent.

Addiction in pregnant women is a rapidly growing problem in America. Without drug rehab during pregnancy, the health consequences for mother and child can be devastating. Here are some of the facts, figures, and challenges of addiction treatment in pregnancy.

According to a report by the Substance Abuse and Mental Health Services Administration (SAMHSA), about 4 to 5 percent of women between the ages of 15 and 44 who enter substance abuse treatment are pregnant at the time of admission. Among pregnant women seeking treatment at drug rehab centers, the number of women addicted to alcohol saw a decline from 2000 to 2010, but the number of pregnant women addicted to drugs increased from about 51 percent to nearly 64 percent, indicating that the substance of abuse reported at the time of rehab admission has changed over the years.
In the past couple of decades, prescription opioid overdose deaths in the United States increased dramatically by more than 500 percent. Mirroring this increase, the number of pregnant women admitted for treatment of prescription opioids as the primary substance of abuse increased from 2 percent in 1992 to 28 percent in 2012 despite the percentage of pregnant women seeking addiction treatment remaining more or less stable.

Drug Rehab in the First Trimester: Better Outcomes for Mother and Child​

Substance use during pregnancy is associated with poor outcomes for both mother and child. Women who are addicted to drugs or alcohol require specialized care, including prenatal care and addiction treatment, to address their complex medical and psychosocial needs. Studies have found that a comprehensive prenatal and addiction treatment program for women with a history of alcohol or drug abuse is associated with positive health outcomes. Women who present for treatment early in their pregnancy have the best outcome with a higher rate of breastfeeding and discharge home with the mother following delivery (as opposed to protective child custody or adoption). More than 90 percent of women who start addiction treatment in the first trimester have custody of their baby at discharge.
Research shows that infants with only first-trimester exposure to methamphetamines fare better than infants with continuous exposure until the third trimester.

Avoiding alcohol is recommended to all women who are pregnant or planning to become pregnant. Alcohol is most harmful to the developing fetus for the first 12 weeks of the pregnancy, but stopping drinking at any time, even during the second and third trimester can help reduce risks. According to the CDC, brain development occurs throughout the pregnancy and the sooner a pregnant woman stops drinking the better it is for her and her baby.

Treatment for Substance Use Disorder and Legal Issues​

Many women are aware of the risks of alcohol and drugs during pregnancy and want to quit but are unable to do so on their own. Some pregnant drug and alcohol abusers avoid seeking addiction treatment for fear of legal issues. Expectant mothers fear there will be consequences regarding custody of other children or other legal ramifications. Social stigma and the fear of being criticized and judged by healthcare providers, friends, and family also prevents some pregnant women from going to drug rehab.
According to the American College of Obstetrics and Gynecology (ACOG), the threat of incarceration prevents many women from seeking prenatal care and this is ineffective in reducing drug and alcohol abuse in expectant mothers. There is no specific criminal law for drug abuse during pregnancy, but in some states, substance use during pregnancy is equivalent to child abuse. Laws mandate obstetricians report substance abuse in their patients. Pregnant drug abusers may be persecuted for child neglect, endangerment, mistreatment, and abuse. Legally mandated drug testing and reporting and fear of legal consequences, such as incarceration, commitment, loss of child custody, and loss of housing, leads many pregnant drug abusers to disengage from even routine prenatal care, putting themselves and their babies at considerable risk.

Getting help for addiction as early as possible in the pregnancy is of benefit to both mother and child. A comprehensive drug rehab program reduces the risk of miscarriage, preterm delivery, birth defects, and neonatal abstinence syndrome. It also restores the mother’s physical and psychological health to enable her to care for her baby during the pregnancy and after birth.
According to a study published in the Journal of Substance Abuse, treatment outcomes are significantly improved for those enrolled in comprehensive residential substance abuse treatment programs for pregnant women and new mothers. Addiction in pregnancy is not the end of the road. It is possible to get help at drug rehab and save two lives in the process.