Klonopin Side Effects – How Does It Affect Our Body And Mind?

Klonopin is often prescribed for anxiety and seizures. However, the drug can potentially have negative side effects. The side effects of Clonazepam may affect an individual both physically and psychologically. Furthermore, Clonazepam effects can both short term and long term. This article aims to help to identify Klonopin side effects and how to get the best medical assistance to deal with them.

What are the Side Effects of Clonazepam?

Klonopin addiction often stems from initial treatment for anxiety using the drug. Due to Klonopin not having a set dosage, it is possible to abuse by those consuming it easily. Although a doctor may recommend a certain amount of the drug, many users will go over that amount and develop an addiction. This can cause the side effects of the drug to be enhanced.
According to The US National Library Of Medicine, typically, Clonazepam side effects affect both brain and body. Clonazepam side effects include depression, relapse anxiety, and nausea. Identifying the psychological side effects of Klonopin is often a challenge, which is why it is important to keep a constant lookout for thought issues, memory issues, and depression. 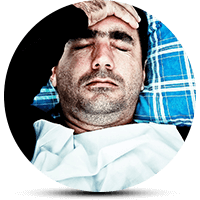 Klonopin can have an array of short-term side effects including:

Another of the short-term side effects of Clonazepam is depression. Many of those who take Clonazepam in higher doses, experience depression and thoughts of suicide. This is also common in those who take clonazepam for sleep as they have to take larger doses to quell their anxieties.

Long-Term Effects of Clonazepam Use

Some of the short-term effects may also be enhanced when the user abuses the drug in the long term, they include:

Why Get Medical Help for Klonopin Abuse?

Klonopin is a beneficial drug is administered and taken correctly, in the dosage recommended.

However, when it is abused, it can be highly addictive and high dosages can lead to dangerous side effects. Because of its dangers, one should seek medical assistance, if any Klonopin side effects become noticeable.

Another reason one should seek medical help is Klonopin abuse, because of physical dangersit can bring. According to the Substance Abuse And Mental Health Services Administration, Klonopin use is on the rise. Furthermore, abuse deaths have been on the rise every year since 1999. In 2011, 7,161 people died from the drug in the US alone. As opposed to just over 1000 in 1999.
Clonazepam can also cause psychological issues. More and more psychological issues are being reported year on year because of the drug and those like it. This reinforces the danger it can bring.

Klonopin Side Effects – Avoiding The Worst

If one is suffering from the side effects on Klonopin, then it is essential to find a medical professional to guide away from abusing the drug. In the meantime, it is necessary to minimize the symptoms.
While taking Clonazepam for anxiety, there are a few ways to avoid the worst side effects and Klonopin withdrawals. When withdrawing from a drug, the original symptom often comes back stronger, in this case, anxiety. But with plenty of exercises, a magnesium filled diet, and even some relaxing yoga, can ensure that anxiety stays away. This will help to stay on track and rid of Klonopin and its side effects.