Getting High On Vyvanse And Recreational Use Of The Drug

Most young people wonder whether they can get high on Vyvanse, and the simple answer is yes. Manufactures of the drug tried to make it difficult to abuse the drug through methods such as snorting and injecting in a bid to curb its recreational use. However, users still get the euphoric feeling once they ingest a large enough dose. Nonetheless, there are serious risks and consequences of the recreational use of lisdexamfetamine dimesylate.

What Is Vyvanse High?

Vyvanse high is the feeling of intoxication that is characterized by the abuse of lisdexamfetamine. The drug was first approved for the treatment of ADHD in 2008, but it has since increasingly been abused by people seeking an educational breakthrough, recreational purposes, and weight loss. Vyvanse recreational use produces a euphoric feeling. The drug is a stimulant and rapidly increases the production of dopamine in large quantities in the brain. But before this happens, lisdexamfetamine is converted by Trypsin in the small intestine to dextroamphetamine, a potent stimulant which is released to the bloodstream.

Recreational use of the drug equals abuse and is against the law. No one should chase Vyvanse high as it is dangerous for one’s health.

Reasons People Want To Get High

There are a number of reasons why people abuse Vyvanse. For students in both high school and college, it may be due to peer pressure, curiosity, academic frustration or just looking for a way to have a good time. Curiosity and experimentation, however, is considered the main reason why these students try various amounts of the drug in a bid to find the Vyvanse high experience. As for adults, the primary reason they may choose to get intoxicated is the need to take the edge off and get a feeling of relaxation from their daily activities and routine.

Medication should be used only if a person has conditions it treats and only after visitind a doctor. Otherwise, it is considered as abuse and is illegal.

How Abusers Get High On Vyvanse 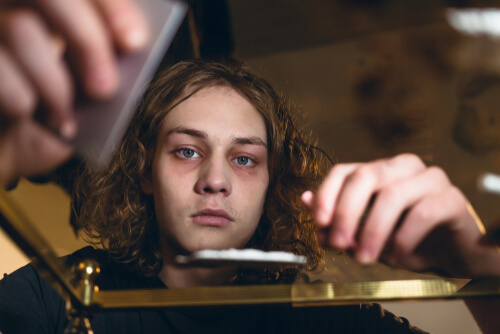 The Vyvanse doses are usually consumed orally depending on the amount that the doctor recommends in the prescription. People who abuse the drug take more than the recommended amount with the intent of getting intoxicated. Other ways in which people have tried to get high on lisdexamfetamine is through injection or snorting.

There is no other safe methods of Vyvanse use than prescribed one. If the drug is used differently, it is abuse and is illegally prosecuted.

The lisdexamfetamine euphoria is a feeling that many explain to be a bit subtle since it takes a little longer to kick in. Not only does the drug produce feelings of euphoria, but also, it has a more prolonged with an average high lasting about 10 to 14 hours.

However, the feelings of motivation diminish with time leaving people with a feeling of focus and commitment which lasts a bit longer but also fades away with time. This casts all doubt aside and answers the question regarding what Vyvanse feels like.

Risks Associated With Getting High

One of the most common Vyvanse effects it the dependency and addictive nature of the drug. That’s why any abuse signs should be taken seriously, and a person needs to seek professional addiction treatment immediately.

Besides, numerous risks and dangers can befall its high seeking users. An overdose is one such risk that can cause death. Lisdexamfetamine has a potential for overdose if abused because people tend to grow a certain level of tolerant to it. After persistence use, they, therefore, increase the dosage not knowing the potential health risks. An overdose can lead to the following symptoms:

Different people had different reasons why they had used recreational lisdexamfetamine dimesylate. Vyvanse recreational dosage also varies significantly from person to person. Therefore, people have to find what amount works best for them experimentally.

Recreational Purposes Of Using The Drug

Some of the reasons why people used the drug for recreational purposes include:

Vyvanse price for 50 mg Vyvanse pill is about $15 to $30 depending on a lot of other factors. This means that the drug can easily be acquired making it even worse for those who are hooked to seek help.