Vicoprofen High – What Is It Like And Why Is It Dangerous?

Vicoprofen is a pain-relieving combination of hydrocodone and ibuprofen. Too much hydrocodone can slow breathing, increasing the risk of death by overdose on the first use. The other danger of a Vicoprofen high is physical dependence after short-term use that leads to a cycle of addiction. Get help early. This is the key to positive treatment outcomes.

Vicoprofen is the brand name for the combination of hydrocodone and ibuprofen. Hydrocodone is an opiate, belonging to the class of sedative pain relieving medications. Each Vicoprofen tablet contains 7.5mg of hydrocodone and 200mg of ibuprofen. Prescribed for short-term pain and as a cough suppressant, the addition of ibuprofen helps reduce swelling and inflammation that often goes with pain. Research shows combination medications like this are more effective for relief of acute pain than each medication on its own. Vicoprofen is not recommended for long-term pain management.
Ibuprofen is a commonly used non-prescription medication, that is a staple home remedy for headaches, back pain, menstrual cramps and even arthritis. It is a nonsteroidal anti-inflammatory drug (NSAID) which works by reducing the causes of fever, inflammation, and pain. Vicoprofen should only ever be used as a short-term solution to severe pain should never be used for chronic pain such as arthritis.

Doctors typically prescribe Vicoprofen with a dosage of 7.5mg every 6 hours. Hydrocodone begins working 30-60 min after taking the pill and the pain-relieving effects last 4-8 hours. Keep in mind that  each Vicoprofen has 200mg of ibuprofen. Taken as prescribed, someone would end up taking 800mg of the recommended maximum of 1200mg per day.

It is highly unrecommended to increase the dosage on their own. Always stick to a doctor’s prescription and consult before making any adjustments.

Because Vicoprofen is a prescription medication one should be under medical care before being given this drug. The doctor prescribing it needs to be aware of one’s medical history, which also needs to be accurate in order to prevent any dangerous side effects Vicoprofen may have.

Even when taking ibuprofen on its own there is a risk of heart attack or stroke, if taken over a long period of time or in large quantities, especially if one has a heart condition. Vicoprofen intensifies that risk, even for people who don’t suffer from heart conditions.
Ibuprofen can also be the cause of intestinal or stomach bleeding which can result in death. Especially elderly people need to be cautious of this while taking Vicoprofen.
If a doctor wants to prescribe Vicoprofen to a patient, it is important to be sure to notify the doctor about any of the following conditions:

These are all factors that put a patient at a higher risk of dangerous side effects.

As with any medication, even when used as prescribed patients may experience some side effects. It is important to monitor them, to know if the symptom occuring are out of the ordinary. Some of the most common side effects of Vicoprofen use include:

Patients should immediately contact a doctor if they experience any of the following symptoms. They indicate an adverse reaction and can be the sign of something being seriously wrong. These symptoms include:

Vicoprofen may slow reactions, making a patient woozy and drowsy. It is best to not drive, or operate any dangerous machinery until determining how this medication affects a patient. Everyone is different, and some may find that they can function sharply and without a problem taking Vicoprofen, while others may find its sedative effects too strong for that.
One needs to be cautious of using Vicoprofen with any other pain, cold or allergy medication, preferably consulting a doctor. The risk is that many over the counter medications contain ibuprofen so it is important to make sure that patient are not consuming too much through combined medication. Make sure any other medication currently taking does not contain Naproxen, aspirin, ibuprofen, ketoprofen, or naproxen.
Do not drink alcohol while taking Vicoprofen, because it can heighten the risk of stomach bleeding.

Vicoprofen is extremely dangerous to use while pregnant. It may cause children to be born with severe withdrawal symptoms which may take weeks to resolve. If aa woman is planning a pregnancy it is safer to quit taking Vicoprofen before trying to conceive, because substances such as medication or alcohol can have a damaging effect on a child even within the first couple weeks of conception, before most women even know they are pregnant and get a chance to stop using them. Vicoprofen can also pass into breast milk, causing breathing problems and drowsiness in a nursing baby.

Vicoprofen high is like other opiate drugs. When someone takes more than prescribed, sometimes they feel a rush of euphoria. Sensations of extreme relaxation and sedation follow the rush. Most of the physical signs of a Vicoprofen high are noticeable and include:

Other signs may include changes in the sleep cycle and mood patterns, secrecy surrounding activities, and mental fogginess. 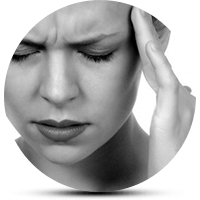 The immediate threat of a Vicoprofen high is death by overdose. Like other opiates, an overabundance of hydrocodone depresses the central nervous system (CNS) which controls breathing. When CNS depression occurs, a person will stop breathing. Immediate emergency treatment can reverse these symptoms.
The secondary danger of a Vicoprofen high is the physical dependence that can develop even after short-term use. If someone is abusing Vicoprofen, the body will crave the substance. To get the rush of euphoria, the amount they use must increase each time. When the high cannot be achieved using Vicoprofen, or if getting the pills becomes too much of a hassle, that person is likely to switch to stronger, more accessible opiates.

Prescription pain medications like Vicoprofen are the most abused drugs by teenagers. Most teens get them from family or friends. Many teens perceive prescription medications as less dangerous than illegal street drugs. Abusing prescription drugs can lead to addiction, and alter a person’s judgment leading to other high-risk behaviors. Prolonged misuse of prescription drugs such as Vicoprofen beginning in adolescence may cause lasting brain damage and cognitive problems.

What To Do With Vicoprofen Addiction

If one notices someone intoxicated by Vicoprofen or any other opiate drug, get them immediate medical attention. A doctor can reverse the effects of opiate intoxication with an opioid antagonist like Narcan to prevent death by overdose.
Next, actively encourage the person to get treatment for drug misuse. Even if someone does not display behavioral signs of addiction, the risk of addiction is high. The danger of opiate drugs is that tolerance and dependence can take over and lead someone to addiction quickly. Those who get help early have the most positive treatment outcomes.
Precautionary measures go a long way in preventing teens and others from misusing prescription medication.

Vicoprofen is a pain-relieving combination of hydrocodone and ibuprofen. Too much hydrocodone can slow breathing, increasing the risk of death by overdose with the first use. The other danger of a Vicoprofen high is physical dependence after short-term use that leads to a cycle of addiction. Get help early. This is the key to positive treatment outcomes.