How Long Does Vicoprofen Stay In One’s System?

Vicoprofen is a combination medication that contains an opioid Hydrocodone and an NSAID Ibuprofen. Doctors prescribe it for the short-term management of moderate to severe pain. Hydrocodone reduces pain by altering how the brain processes the pain signals, while Ibuprofen reduces the levels of inflammatory chemicals. In general, one should not take it continuously for more than ten days. Hydrocodone is very addictive. Thus, patients should follow a doctor’s instruction.

How Long Does Vicoprofen Stay In One’s System?

Vicoprofen may stay in one’s system for a day or up to ninety days. It depends on how to look on it. General observation shows the following.

How long Vicoprofen stays in the system is a common question among its users. But there is no single answer to this. It is because a multitude of factors determine how long a drug stays in the body fluids or organs. Thus, tracking the effect of every factor and determining the time for each is seemingly impossible. Nonetheless, certain standards help to interpret the test results.

Vicoprofen is primarily metabolized by the liver enzymes through a series of complex steps. In fact, the pain-alleviating effects of Vicoprofen are a result of both the parent chemical and its metabolites. The major metabolites of Hydrocodone are Hydromorphone and Norhydrocodone, while Dihydrocodeine is a minor metabolite. Propionic acid derivatives are the metabolites of Ibuprofen.

Metabolism is a biochemical process that converts a drug into other chemicals once it is available in the bloodstream. Thus, they also call it biotransformation. The liver is the primary organ for the metabolism of most drugs. The products of metabolism are called metabolites. In the same way, the portion of the medicine that survives metabolism is called parent drug or just, unchanged drug.

Drug detection tests can measure the levels of the parent drug as well as the metabolites in the sample specimen. Thus, one may test positive even when a drug taken flushes out of the body rapidly. It is when the metabolites persist in the body fluids.
Ibuprofen in Vicoprofen contains two forms of the chemical. They are R-form and S-form. Both these are metabolized by the liver enzymes into the derivatives of propionic acid. The amount of Ibuprofen metabolites in the blood is lower than that of the parent drug.

When Does Vicoprofen Appear In The Blood? 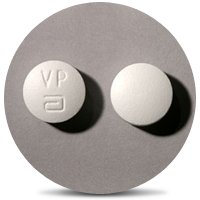 Hydrocodone becomes detectable in the blood 1.7 hours after intake of a Vicoprofen tablet. While Ibuprofen may take a bit longer time, that is 1.8 hours. Likewise, oral fluids may also contain detectable Hydrocodone within the same duration.
However, this does not mean patients will test positive within two hours after taking a tablet. In fact, to test positive, the amount of the drug in the urine or blood sample needs to fall within a predetermined value or range. They call this cut-off limit. “Window of detection” is the period during which the sample contains enough drug that may fall within the cut-off limit.
A positive test result will require a patient to take a confirmatory test, while a negative result requires no further investigations.

How Long Does Vicoprofen Stay In Urine, Blood, Hair, And Saliva?

Urine Test For Hydrocodone And Metabolites

The urine test is standard and easy to conduct. Also, the drug in urine tends to remain for a longer duration. When a patient takes a urine test, the detection time for Hydrocodone and its metabolites is two to three days after the last dose.

Blood Test For Hydrocodone And Metabolites

As a matter of fact, a blood test to determine the amount of a drug in the body is used less commonly. It is because drawing the blood is an invasive process. Moreover, the drug flushes out of the blood more rapidly than from the urine. Nonetheless, the hospitals and research facilities may use the blood tests routinely.
When one takes a blood test, the detection time for Hydrocodone and its metabolites is less than 24 hours.

Other Tests For Hydrocodone

The tests that analyze saliva or hair strands are also among the options. Nonetheless, they are less common than the urine test.
Notably, Hydrocodone remains in the saliva for twelve to thirty-six hours after one had it last time. Likewise, the hair strands may contain a measurable amount for up to ninety days.

Factors That Influence How Long Vicoprofen Stays In The System

In general, the higher the dose, the longer it will remain in the system.

The frequency of Use

When used more frequently, it may accumulate in the body tissues. Thus, it will take a longer time to flush out of the body.

The levels of the liver enzymes determine how much of the drug gets metabolized. If a patient has any liver disease, the rate of metabolism slides down by a significant margin. Moreover, every individual has a unique metabolic rate. Meaning, the same amount of Hydrocodone may stay in the system for different times among the individuals.

Talk to the experts to know more about how long does Vicoprofen stay in one’s system? They are one of the few sources of trustworthy health information. With the correct information, one can expect to benefit better.
Looking for professional medical help for Vicoprofen or opioid addiction? Get the best rehabs page here.