Peyote is a powerful psychedelic. Its active ingredient is mescaline. Although peyote is not physically addicting, it can lead to psychological dependence, madness, and death. Not surprisingly, it’s Schedule I drug. Peyote addiction signs are a distortion of thinking, troubles sleeping, obsession with spirituality and legal problems. In the case of peyote addiction, seek treatment immediately.

Cactus are unusual plants, they resist extreme conditions. Yet still, they bring beauty into our homes with their shapes and flowers. However, cacti are favorite of some people not because of their floral value but because of their ingredients. In particular, the peyote cactus and the active hallucinogen mescaline in it.
Peyote can be found in the northwestern parts of Mexico, also, it is grown in the southwestern areas of the U.S., in the Great Sonoran Desert, for example.
Peyote has been used as many other hallucinogens in various religious practices to achieve a higher state of mind. Still, the Native American Church can use peyote in some ceremonies. Some of the effects the drug causes are:

But if someone uses peyote its spiritual properties, why is it Schedule I drug?

Although peyote can’t cause physical addiction, the drug is habit-forming. Thus, it can lead to tolerance and psychological dependence. Which, sadly can result in broken families and fatal accidents.

Some of the Peyote addiction signs are similar to any other psychoactive substance:

Also, one can show an abnormal interest in spirituality, God, and self-perception.

It’s important to recognize peyote addiction as soon as possible because mescaline can be dangerous and can lead to life-threatening consequences.
Some of the physiological changes that peyote causes are:

What’s more, peyote affects the emotional well-being of the user and can cause:

The long-term abuse can lead to fatal mental problems.

Dangers of Peyote Addiction & The Importance to Recognize It ASAP

As mentioned above, peyote is not physically addictive. Although, it can cause psychological addiction and severe mental issues. 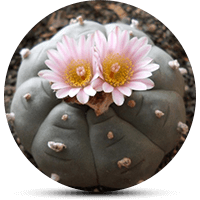 Some of the dangers include:

Temporary psychosis is a common condition caused by peyote addiction. Thus, can results in paranoia, visuals, and distorted thinking. It can become a permanent mental issue.

Hallucinogen Persisting Perception Disorder is another condition characterized by sudden hallucinations. This can be stressful for the user, especially when there are no patterns of recurrence. Flashbacks can lead to madness and fatal accidents. Imagine seeing stuff and hearing colors while driving – a year after the last peyote trip!
Bad trips are another risk. The type of trip depends mainly on the product, the environment, and the user’s well-being. Nobody is immune, though. Bad trips can cause stress, depression, fear, and death.
All these dangers can lead to risky behavior and can be hazardous to the people around the user. That’s why recognizing peyote addiction is crucial. Simply because it can save lives.

Peyote Addiction Signs: How to tell if someone has an addiction to peyote and needs help?

Apart from the psychical, cognitive and emotional changes described above, if someone has an addiction based on his or her social life:

First of all, be supportive and open. Users should understand that it’s hard for the users to admit that they have an addiction. Especially to a substance that is not physically addicting. What’s more, due to regular use, the addict might have troubles thinking and recognizing the reality.

There’s no antidote to the peyote trip. Notice that the effects of mescaline can last up to 12 hours. 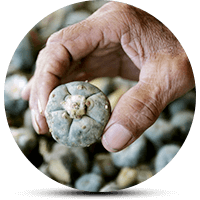 Finally, note that the treatment of peyote addiction is focused on the psychological aspects of addiction: triggers of addiction, self-perception, and perspectives. Holistic approaches and yoga can be very helpful. Especially for people who have an interest in alternative practices. Many rehabilitation facilities offer suitable programs for peyote addiction.