Opium High Explained – What is it like and why is it dangerous?

The dangers of opium high include death by overdose on the first use because the potency of raw opium is inconsistent. Too much opium will slow breathing down so much that it stops. The other danger of opium high is physical dependence after short-term use that leads to a cycle of addiction.

The liquid of the opium plant seed pod is a gummy substance. In its raw form, opium consists of multiple substances and over 50 alkaloids. The most important alkaloid is morphine. The concentration of intoxicating substances in opium is difficult to determine since it depends on the plant and the harvest conditions. Without being able to measure the dosage, the danger of taking too much is very high. 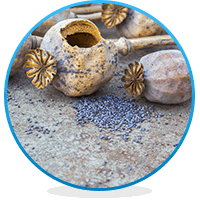 Opium is smoked, eaten, or ingested in the raw state or after it is refined into a powder. Some people inject the powder to get high faster.

Opium is an illegal, Schedule II drug with a high potential for abuse.

A liquid form of opium tincture or paregoric is approved by the FDA as a mild laxative or for controlling diarrhea.
As the base ingredient for making morphine and heroin, the effects of opium are like those well-known drugs. Opium is a sedative and a pain reliever. When the brain floods with opium, the central nervous system slows down, thereby slowing down automatic body functions such as breathing.

The opium high depends on the potency and how it enters the body. Injection produces the quickest and strongest opium high described like an orgasm. By directing the drug into the bloodstream, it reaches the brain very fast, and users describe a rush of euphoric pleasure. Smoking, the second fastest method, causes opium to hit the brain quickly, but the pleasurable feeling comes on gradually. Ingesting the drug in liquid or pill form takes longer for the drug to hit the brain because it goes through the stomach first. Users report not feeling the euphoric high, but they feel the drowsy relaxed state come on slowly.
Following the “high” or rush of pleasure, users report experiencing the sedative and analgesic, or pain relieving effects. Described as a relaxed state where troubles are no longer a problem, users may fall asleep or feel like they are in a dream state. They no longer feel pain, worry, anxiety or fear.

The Risks of Opium High

The dangers of opium high include death by overdose on the first use. Because potency is not measurable, it is easy for someone to take too much. When they do, body systems slow down so much that breathing stops.
The other danger of opium high is physical dependence and addiction. It is a pleasurable experience and feels good. Any worries a person had before use will no longer bother them, any pain felt disappears. Most people who experience opium high want to feel that again.

As someone continues to use opium, the body develops a tolerance. They will need more opium to get the same effect. As use increases, when the body does not have the drug, in as little as a week, it will go into withdrawal. These miserable symptoms are the exact opposite of what a person feels while high. Needing more to achieve the same effect and staving off withdrawal sickness starts the cycle of addiction.

The best way to avoid the dangers of opium addiction and its negative effects is not to use opium recreationally. Signs of use in friends or family will quickly turn into an addiction. Addiction is treatable, and there are medications available to help opium users counter the physical effects of the drug and the unpleasant withdrawal symptoms. Seek whole-person treatment that is comprehensive. Early intervention is the key to full recovery from opium.