Comparing Naproxen – What Is The Difference Between Aleve And Ibuprofen? 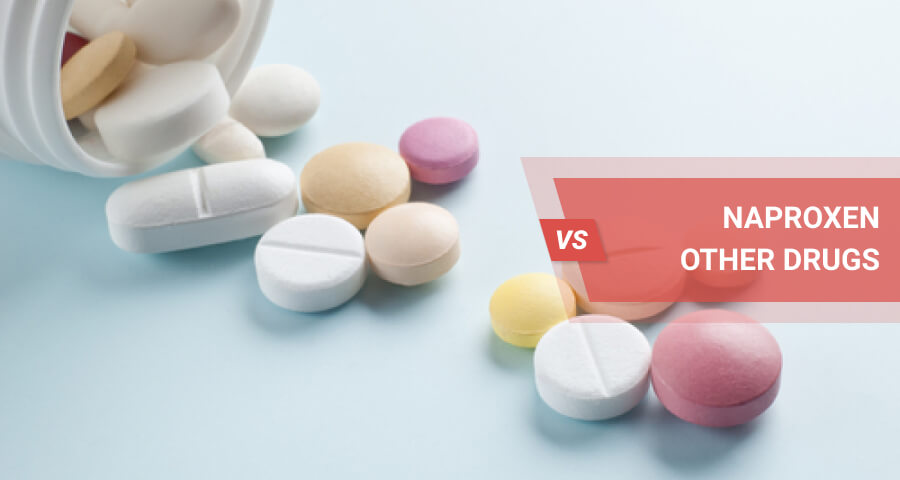 Though it is a safe and cheap pain management tool, there are plenty of alternatives to Naproxen. If one decides to swap the drug, Naproxen alternatives can be both NSAID (same class of drugs as Naproxen) or non-NSAID. The difference between Naproxen and its alternatives will depend on things like side effects, lasting duration, costs, and availability. Find out more about the Naproxen substitutes and respective pros and cons.

One of the most frequent comparisons is with Ibuprofen and some even state that these drugs are the same. So, Is Naproxen the same as Ibuprofen? No. In fact, Naproxen and Ibuprofen are both similar since they’re both NSAID drugs that are used for pain relief and reducing inflammation. They’re both used to treat conditions like toothaches and menstrual cramps. However, when comparing the longevity of action, Aleve is longer-lasting, whereas Ibuprofen is short-lasting.

So, whether one uses Naproxen or Ibuprofen depends on the exact use case. If it’s a sudden sports-related injury, Ibuprofen is more commonly used, whereas, for more permanent conditions like arthritis, Aleve is more common. The severity of side effects in Naproxen vs Ibuprofen also varies, with Aleve more likely to cause upset stomach due to it being longer-lasting. Both can be obtained over-the-counter, but Naprosyn can also be prescribed by a doctor. Due to the difference in duration, a Naproxen dose needs to be administered less often than Ibuprofen. However, both can lead to stomach bleeding and renal issues if taken at the wrong dose or for too long. 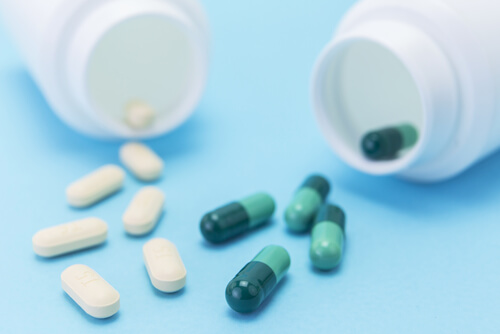 Acetaminophen is another alternative that is also used to relieve pain and fever. The key difference between Aleve and Acetaminophen is that Tylenol has no effect on swelling or inflammation.
Ultimately, what is Naproxen for? It’s an NSAID used for treating inflammatory conditions like rheumatoid arthritis and reduces pain as a result. Tylenol merely reduces the sensation of pain without tackling inflammation. However, unlike Aleve and NSAID alternatives, acetaminophen isn’t as risky to heart health.

Aspirin is also an NSAID alternative to Naproxen, relieving both pain and inflammation. They are both easily available over-the-counter. The difference between drugs is in their use cases. While Aspirin is used to treat fevers and pain, Aleve is mostly used to treat muscle soreness and inflammation (such as arthritis). Further comparison of Aspirin vs Naprosyn shows that later one is generally not used for heart conditions like Aspirin is.[messsage type=”warning”]Only a doctor can alter medications during the treatment course. Self-prescription is dangerous to one’s health[/messsage]
Aspirin is also an effective blood thinner and can lead to excessive bleeding. Well, is Naproxen a blood thinner too? Like all NSAIDs, Aleve can also slow down blood clotting, which could lead to excess bleeding when combined with other blood thinners like warfarin.

Like Advil, Motrin also contains Ibuprofen, so its comparison is the same as that of Naproxen vs Ibuprofen. They both reduce pain and swelling. Again, the main difference between Motrin and Naproxen is that Motrin is short-lasting while Naprosyn is long-lasting.

The biggest difference here is that Tylenol is not an NSAID drug. While Tylenol can work as a Naproxen alternative for reducing pain, Tylenol does not affect swelling.

On the other hand, the biggest distinction between Naproxen and Tylenol is how they work. Tylenol reduces the sensation of pain while Naprosyn reduces pain by reducing inflammation. 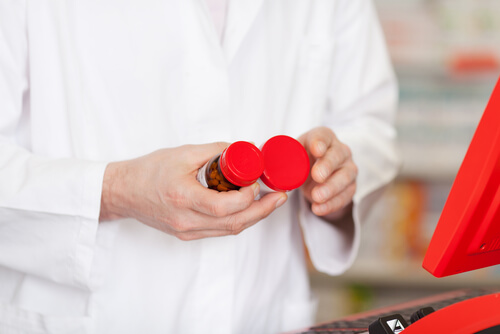 Diclofenac (Zorvolex) is another alternative for reducing inflammation in conditions like arthritis. Comparing Diclofenac vs Naproxen, they’re both similar in that they’re both risky to heart health. So, one should minimize the use of them both if they’re suffering from heart problems.
Another difference is that Diclofenac can’t be used for treating all types of pain, such as nerve pain, for example.

Celebrex is another alternative to Naproxen because both treat pain and inflammation in cases like rheumatoid arthritis.
In comparing Naproxen vs Celebrex, the differences are mainly down to side effects and availability. One key difference is that Celebrex is the least likely to cause stomach problems compared to Aleve and Ibuprofen. Moreover, Celebrex is only available through prescription, so this is a downside of Celebrex.

As Meloxicam and Naproxen belong to the same class of drugs, they treat both pain and inflammation. It is a common Naproxen alternative for treating arthritis pain.
The main difference between Meloxicam and Naproxen is that meloxicam requires a lower dose for the same effect. Meloxicam needs to be taken less frequently than Naprosyn as a result. Another difference is that Meloxicam introduces a lower risk of side effects on the kidneys and stomach. What’s more important is that Meloxicam needs a prescription, so it is a less available alternative.

Certain natural herbs and spices like willow bark, turmeric, and cloves can reduce inflammation and hence pain. The main difference between them and OTC drugs is that they may not be as effective and slower to act. However, one should avoid taking Naprosyn and a natural alternative simultaneously.

Natural alternatives may also cause adverse reactions, including allergy.

Only a medical professional is qualified to choose, substitute, or re-assign the medicine. Self-prescription is hazardous for one’s health.

There is a hip of Naproxen alternatives on the market. Each comes with its own respective advantages and disadvantages which arise from drug class, interactions, and accessibility. It is imperative to consult with the doctor about the replacement of the medicine in order to avoid undesired effects.
Pain relievers like Naproxen can become addictive easily. Taking too much leads to deadly consequences for the heart, kidneys, and stomach. Once the addiction is uncovered one should seek specialized treatment for substance addiction. Addicted individuals require proper treatment by qualified staff at the best local drug rehab centers.