LSD Withdrawal: What Are The Symptoms And Timeline? 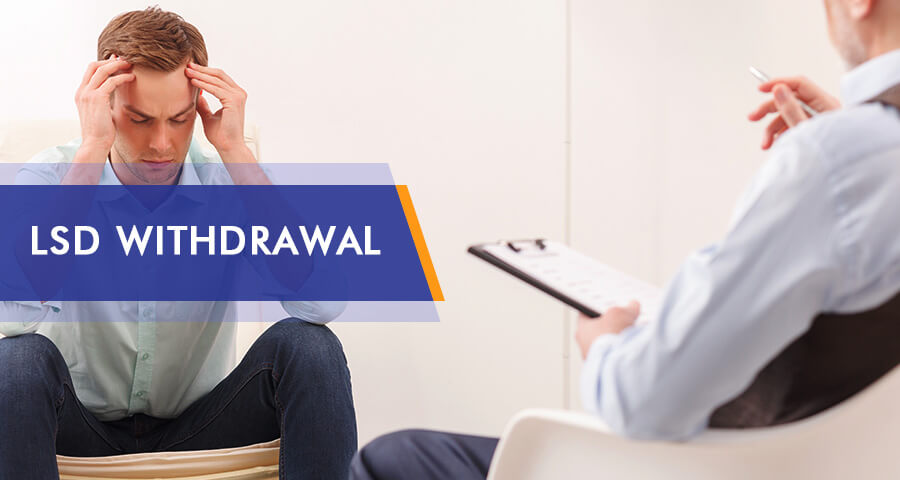 Lysergic Acid Diethylamide, or “LSD,” is a famous hallucinogen predominantly used as a club drug. LSD is a popular-yet-dangerous narcotic that induces visual hallucinations, euphoria, and mood swings.
Furthermore, LSD can induce feelings of anxiety, depression, and hopelessness. Regular users are prone to developing a tolerance to LSD, as well as tolerances to other hallucinogens such as DMT. This results in increasing dosages that can eventually lead to LSD overdose.
LSD is made from ergot fungus and can be found as a white powder or a clear liquid. LSD is not a physically addictive drug; but research has shown that it does, in fact, belong to a group of highly psychologically addictive substances.
LSD may not produce any signs of physical dependence, but can trigger psychological dependence.

Nonetheless, there have been a few recorded exceptions in which users reportedly showed similar signs to alcohol or cocaine withdrawal when they stopped using the substance. In such rare cases, it is highly possible that the patient may have to face problems linked to dissociation; however, treatment for LSD withdrawal symptoms is necessary.
Even though research shows that the majority of users fail to develop a physical addiction to LSD, many indicators point towards a strong psychological addiction.
If psychological dependence occurs, users can develop the following unusual withdrawal symptoms.

Signs Of Addiction To LSD

Signs of LSD addiction include:

Flashbacks are the one symptom that most characterizes the withdrawal period. They can occur days, months, or even years after one’s last LSD dose. During flashbacks, the user can experience hallucinations, fear, and even psychosis, known as a “bad trip.” The treatment for these unusual and unexpected withdrawal episodes is based on a benzodiazepine or antipsychotic medication.
Unfortunately, these remedies cannot eliminate the psychological side effects of LSD withdrawal, but they can alleviate some of the symptoms and provide a sense of calmness to prevent the LSD relapse.

Factors that determine the intensity of the withdrawal symptoms:

Some experts claim that withdrawal symptoms of the LSD do not exist—at least not in their typical form. In most cases, there are no signs of physical addiction to the drug, but there are many symptoms related to psychological addiction. Some symptoms can be very dangerous and may induce suicidal thoughts.
Rehabilitation and treatment of LSD users are based on behavioral therapy, counseling, family support, and rebuilding relationships with friends.