Hydrocodone and Alcohol Mixing – Dangers and Effects of Interaction

Hydrocodone is one of the most frequently prescribed painkillers, often under the brand name Vicodin, Lortab, Norco, or Lorcet. There are generic versions of the drug that vary in Hydrocodone strengths and are cheaper than branded ones. With this opioid medicine being quite widespread, drinking on hydrocodone remains a big concern both for doctors and the society.
The drug works to inhibit pain signals to the brain hereby relieving serious pains, making this drug highly effective as a pain reliever. This drug also falls into the category of schedule II drug which is highly addictive on abuse and presents with a remarkable amount of health problems especially when one is drinking alcohol while taking hydrocodone.

Why Mixing Alcohol with Hydrocodone is Dangerous 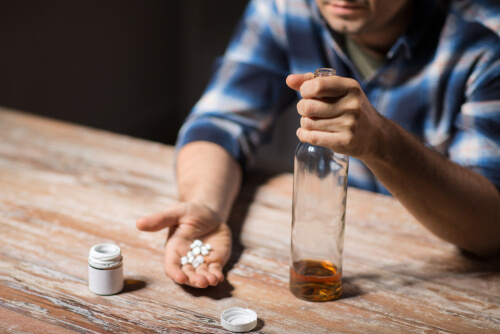 increase the feeling of high but will also put pressure on the nervous system which becomes visible over time.
Hydrocodone-alcohol combination can cause irreparable damage to the body. Hydrocodone and alcohol may have pleasurable effects on the on-set such as a feeling of euphoria and a numbing highness; however, this feeling has long-term risks if unchecked.
Both alcohol and hydrocodone have similar neurologic effects such as intoxication and a feeling of high, as both can cause relaxative changes in the system. Hydrocodone with alcohol can cause escalated distortions in breathing and heart rate which can lead to heart failure, Coma and even death.
It is quite unfortunate that a remarkable number of people die every day from the misuse of drugs such as Adderall and hydrocodone, with alcohol mixtures. The United States alone records hundreds of millions of opioid prescriptions yearly and these cuts across all demographics. A large number of these opioid prescriptions contain pain inhibitors, such as hydrocodone chlorpheniramine syrup and the likes.

The drug is usually administered as a cure for chronic pain, the mode of reaction is to create a drowsy effect which relaxes the muscles and numbs the pain. Alcohol is a known depressant and presents with the same feeling of high as the drug; this combined intoxication immediately leads to the breakdown of the nervous system with major effects on the breathing. A list of side effects include:

Drinking alcohol while taking hydrocodone puts extreme pressure on the liver and can result to the following:

Drinking while taking hydrocodone is fatal due to its combined depressant effects. Abuse of the drug on it own can cause Hydrocodone hangover which is medically referred to as the after effect of taking large quantities of hydrocodone.

Some of these effects can also be experienced through hydrocodone lean. This usually involves mixing the drug with various carbonated drinks for pleasure or indulging on hydrocodone – homatropine syrup high. It is also mention-worthy that the route of exposure does not decrease the content of drug from the body; this refers to harmful crude techniques such as snorting hydrocodone.
The symptoms of hydrocodone overdose alone are quite broad but often less spontaneous than mixtures with alcoholic drinks. There are other extended reactions that can emanate from other combinations such as the side effects of hydrocodone acetaminophen.

How Long After Taking Hydrocodone Can One Drink?

When opioids are taken, they find their way into the bloodstream and are absorbed into the body. After these opioids are metabolized and re-absorbed they are channeled to the excretory system and deposited in the urine.

How long after taking hydrocodone can I drink?

A safer period to consider taking alcohol would be from the 5th day after the last dosage typically. It is imperative to talk to a medical professional about specifics such as the dosage amount and other factors that may affect the half-life of the opioid such as age, weight, and other factors associated with alcohol with hydrocodone reactions.

How long after drinking can I take hydrocodone?

“Safe Amount” of Alcohol to Take With Hydrocodone

Again, this is highly dependent on earlier mentioned factors, and there are no safe amounts. Discussing these probabilities and conditions with one’s doctor is imperative. It would be unsafe to make assumptions as both contents have a strong effect on the nervous system and can lead to an overdose.

Drinking with hydrocodone often occurs out of ignorance, addiction to alcohol while on medication or vice versa. In cases where hydrocodone and drinking are likely to occur due to addiction to the opioid, it is necessary to seek the help of a medical professional who would provide adequate counseling on hydrocodone acetaminophen alcohol interactions and how to manage addictions.
Many facilities offer treatments for drug abusers and provide counseling for early detection, management, and system detoxification to enable a complete body cleansing from the addictive drug. If someone is experiencing signs of addiction to opioids or interactions between hydrocodone acetaminophen and alcohol, contact us immediately for counseling and support.