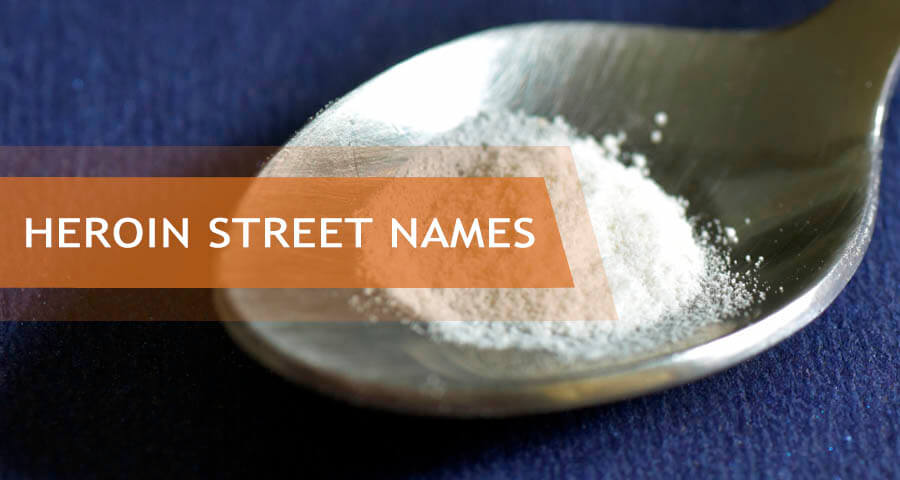 In the world if illegal and controlled drugs, there are hundreds and thousands of nicknames, slang terms, and street names assigned to almost all imaginable drugs. Hundreds of these terms are being used for tar, powdered drugs, or heroin pills. All of which are highly addictive substances in any route of intake.
Street names and slang terms for Heroin were derived from several sources. Some were based on the drug’s physical appearance, type, packaging, and source. Others like to call it based on its effect on the user or how heroin makes you feel like.
Some names, however, are used simply to cover up heroin addiction stories and throw eavesdroppers off track.

Nicknames and Street Names for Heroin

Heroin generally looks like brown or white powder. Typically, this drug is injected into the body, but teenagers are turning to smoke heroin, sniffing it, and consuming pills, as they believe these ways are safer than injections.
Let’s get down knowing what some well-known nicknames and other names for heroin are:

Dope has lived a diverse slang life for more than two centuries, only coming to its modern adjectival sense of “good” or “excellent” in the past 3 decades. When it comes to its specific drug sense, the word “dope” was first heard from dope fiend, a drug user, in 1886. Soon after, people find it referring to opium or morphine derivatives and today, it almost always refer to heroin synonyms or another opiate.

Some of the more obscure Heroin nicknames require a little imagination. “Smack” is one of them. Long before liquefaction of drugs for IV use was invented, people must smoke heroin or sniff it to get the drug into the system. The Yiddish word “Schemeck” is synonymous to sniff, which they changed to “smack” to suit the American English slang language. And even though intravenous route is now more popular, antique names have remained.

The concept of sniffing drugs likewise explains one of the different names for Heroin – “dragon.” To gauge the strength of a drug before converting it into a more potent form, or under the belief that inhalation is the safest method to use, people tried inhaling the still-runny substance before it congeals into a semi-solid mass.  “Dragon” is very popular in Chinese culture and history and the idea of pursuing an elusive and mythical goal such as scoring an even better high that never comes is the concept that supports this slang for Heroin.

Street Heroin is available in different forms and appearance would depend on what heroin is made of. In the west coast, it is commonly cut with lactose like a powdered milk, giving it a dusty to dark brown color. Such appearance is very much similar to a mud.

Another popular street name for Heroin is “brown sugar.” During cutting, this drug is commonly mixed with additives like Hydrochloric acid and caffeine, hence producing a grayish to brown color. After continuous stirring, it often forms lumps and will be crushed into a powder form making look like a real brown sugar.

Tar is yet another popular Heroin name. It is called as such because the substance after cutting with lactose, dissolution, reheating, filtering, and recrystallization, it becomes sticky like a tar.

China white is one of the most synthetic heroin names. It is called as such because of its appearance. It is a high grade substance cut with Fentanyl.

Another Heroin slang name is Mexican Horse. It has earned this nickname because it can easily kick equines into overdrive. Opiates can likewise trigger such kind of flight response in humans. Mexican cartels are among the very first to manufacture, cut, and sell this drug, hence it was named after them. They have set the standards on how much heroin costs.

When combined with other drugs, heroin is called laced to get a certain high. These drugs include LSD, marijuana, cocaine, morphine, and many others to form different combinations.
For these types of mixed drugs, following are the nicknames or heroin street names used:

Ritalin is a form of junk, which normally comes as a tablet to be taken orally. Users usually consume it by crushing into a powder and snorting or mixing with fluid and injecting intravenously. Casually known as pineapple, this stimulant drug aids hyperactivity and impulse control. It causing release of excessive dopamine in the brain leading to feeling euphoric and happy.

Listen to the teens carefully as they aren’t always talking about nutrition bars; they may be referring to a slang term for heroin, when combined with alprazolam.

Beast of LBJ is a combination of tar and xanax. Otherwise used as a minor tranquilizer, xanax when combined with mud gives rise to one of the most addictive forms of drugs.

Not a healthy snack. In street lingo cheese, relates to skag and a cold medicine combination. Teens usually indulge in this drug – a substance mixed with a cough syrup. It leads to a woozy kind of a high; a phenomenon known as robotripping.

These terms refer to a chiba and cocaine combination. This form of drug mixture mainly causes a feeling of loss of appetite, increased heart rate, and a constant delusional state. It is quite literally, the most fatal combination when it comes to addictive drugs.

This potent combo is snowball and crack, which forms one of the most illicit drugs of all times. They are both very common, destructive and addictive.

The sound of chocolate chip cookies may sound very harmless but only the contrary is true. These cookies are a powerful concoction of H and methadone.

A deadly combination of H and methamphetamine.

This potentially lethal combination is mud plus methamphetamine, cocaine, Rohypnol and alcohol

This strange-sounding slang term is the identifier for combining H and marijuana. Marijuana, which is already a powerful psychoactive drug mimics the experience of smoking natural marijuana and the consequences are often intensified as mud comes to the picture.

Heroin consumption has fatal consequences but when it is combined with other drugs, the possibility of unfavorable effects rises to a great extent.

Is your loved one whether your child or friend talking is about using abusive drugs right in front of you? It may indicate you to think about drug treatment to avoid the problems down the road. Below are some common slang terms for heroin use and abuse to explain someone who uses heroin:

Why It Is Important to Know Heroin Slang Terms

Knowing and understanding the different names for heroin is not only important for law enforcement groups but is likewise significant for family members and friends for several reasons: