Heroin Laced with Fentanyl – Effects of the Cut Big H 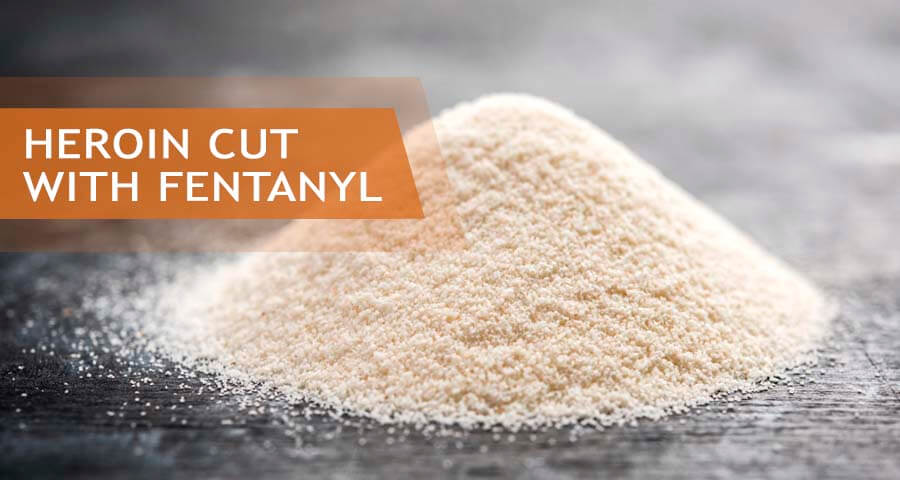 The morbidity rate associated with drug use has skyrocketed in recent years owing to the combination of different drugs in order to produce a more intense high. Recently, the heroin-fentanyl combination has become quite popular with the addicted individuals.
Cutting heroin with fentanyl has taken the drug epidemic to an altogether different level as death tolls of addicted users have hit an all-time high. What people don’t realize is the dangers associated with the deadly heroin and fentanyl mixture. There is a need to understand the health hazards of using laced opioids.

Why Heroin Is Sometimes Laced With Fentanyl

Fentanyl is a potent opioid which has strong pain-relieving properties and is usually prescribed to people with chronic pain, such as terminally ill cancer patients. Heroin and fentanyl, when mixed together yield a powerful “speedball” that provides people with an elevated high, more intense than regular opioids.
It is imperative to understand that the users may not even be aware of the fact that there are unforeseen consequences for getting high on fentanyl-laced heroin.
Drug dealers are using heroin cut with fentanyl as a market strategy to not only make money but also to ensure market sustainability by getting their buyers hooked on a more addictive substance than the conventional heroin. Other harmful mixes such as weed laced with heroin or fentanyl mixed with various high-level opioids cause drug dependencies which means more business for the dealers. Regular fentanyl is cheaper than heroin, but 50-100 times more potent, fat-soluble, dangerous and only very rarely do people build tolerance for this drug. When fentanyl is laced with heroin, customers keep coming back for more.

The Dangers of Fentanyl Mixed With Heroin

There are many dangers associated with mixing both opioids, and there’s a reason why using these drugs together is deemed more noxious than using heroin alone.

Fentanyl and Heroin Are More Psychoactive When Mixed Together

Fentanyl in heroin holds a higher risk of drug overdose owing to the chemical structure of fentanyl. Like heroin, the fentanyl molecules are non-polar which means that they can easily pass through the lipid barriers surrounding the body’s cells.

Their non-polarity makes fentanyl molecules better able to pass through the blood-brain barrier that filters out most of the substances and prevents them from getting into the central nervous system. Therefore, fentanyl molecules are better able to enter the central nervous system and directly exert their effects, which makes laced heroin more dangerous.

Fentanyl-Laced Heroin Is Linked With Higher Risk of Overdose

The drug has a higher potential for abuse due to the fact that it induces a more potent “high” state in users which is why the likelihood of drug overdose is higher when using heroin with fentanyl. According to the statistics of the Center for Disease Control and Prevention, in the US, around 72,000 people died from fentanyl-related drug overdose in the year 2017 alone.

The health effects of snorting heroin can be fatal, ranging from acute to chronic reactions. Here are some of the health risks associated with using fentanyl in heroin.

Like other opiates, the mix reduces the rate of breathing. When mixed with heroin, this effect is even more pronounced and may lead to respiratory paralysis, and even death.

The mixture of fentanyl and heroin has a higher possibility of addiction due to its combined potency as high-level opioids. The heroin addiction symptoms are amplified when the drug is mixed with fentanyl. The common symptoms associated with the abuse of both drug are:

The harmful heroin effects on fetus are multiplied in many folds when indulging in the harmful opioid intake while pregnant. When using fentanyl mixed with heroin during pregnancy, one runs the risk of losing the fetus through vasoconstriction of the placenta, and other irregularities such as high fetal blood pressure to the heart and brain, low ph and others which can all lead to the death of the fetus.

Spotting the Fentanyl Laced with Heroin

Both opioids are very similar in appearance as both are cut as white powdery substances which can also be mixed with other additives for coloring. It is quite difficult to really differentiate both drugs. However, there are simple techniques that can be applied to understand substance composition.
Here are ways to spot heroin laced with fentanyl:

Use of Fentanyl testing strips

One can easily differentiate heroin mixed with fentanyl by using test strips. They are accurate and easy to use. One strip indicates the presence of the opioid or its analogs while two strips mean its absence. Ensure that test strips are bought from certified distributors to avoid purchasing counterfeit strips.

The heroin laced with fentanyl effects are extreme as compared to just heroin. The mixture may be difficult to differentiate in some regions as they appear to be a white powdery substance, while in some other area genuine heroin may appear in other undoubtable forms such as off-white in color or a black sticky substance popularly known as black tar heroin.

unable to identify the mixture when added to a clear liquid. Authorities have confirmed that the easiest way to spot these substances in a solution is by the color they give off. Heroin displays a yellow tint color while the fentanyl presence shows off bright white.

Intravenous drug injections are very dangerous, life-threatening and the most addictive route of exposure. One can attempt to evade using the needle by smoking a little amount of the substance, in this case, heroin laced with fentanyl/carfentanil, on foil before trying to go for the needle. It is most likely that the user would fall unconscious before lethal amounts are inhaled.

The rate of people living with addiction and drug dependency has escalated to alarming figures over the years. More and more people become addicted to prescriptions and seek out other means for adequate supplies, this often leads to purchasing from the black market or the streets. These illegal distributors make a profit by lacing drugs with other cheaper components for profit and fentanyl, which is often used, is the human killer.
Many facilities to provide effective treatment for substance abusers to enable them detoxify and rejuvenate their bodies. Inpatient rehabilitation facilities provide intensive care, support, and medication to help even the most extreme cases get back on their feet.

Addiction Resource » Addictive Substances: The Anatomy of Drug Addiction » What Is Heroin Abuse: Why Is Smack So Addictive? » Heroin Laced with Fentanyl – Effects of the Cut Big H