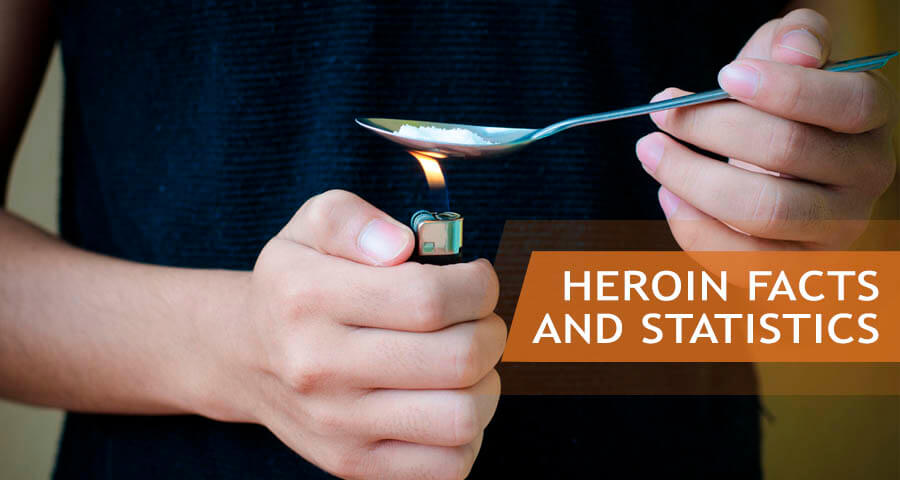 According to the National Survey on Drug Use and Health (NSDUH), about 948,000 Americans reported using heroin in 2015.
The number of first-time heroin users is high, with 170,000 people starting to use it in 2016, which is almost twice as much as in 2006 (90,000).
The first patient treated for the addiction was admitted in 1910 in the New York Bellevue Hospital, and the number of adult users has continued to grow ever since. Its use has expanded on all income levels and most age groups in the past decade, as have incidences of heroin overdose death.

Heroin User Statistics: How Common Is the Drug?

The opioid drug heroin looks like a whitish or brownish powder or a black sticky substance called black tar, which one is able to recognize from a young age. The most common heroin slang names include smack, hell dust, horse, and big H. 28,000 children had used this drug in 2013, from which more than a half continued in 2014. 18,000 adolescents were estimated to be addicted to heroin in the year 2014.

Facts About Heroin: Who Is Most At Risk?

According to heroin use stats, the following groups are potential victims:

These risks are not to be underestimated, as the heroin deaths statistics presented later in the article will show.

Sex on heroin isn’t all it’s cracked up to be. Men experience erectile dysfunction, and women are unable to achieve arousal. Another interesting fact is that the abuse of opioid painkillers seems to be the most reliable factor leading to this type of addiction.

Heroin Addiction Facts: Use of Other Drugs

Over 90% of consumers of this drug also abuse one or more other substances. For example, 5 of every 1000 people who consumed it took cocaine as well. This fact can cause a number of complications, including a heroin withdrawal timeline that is more difficult to predict and manage. In 2014, almost 2 million people abused a prescribed opiate medication, whereas over 500,000 were heroin addicts. Data shows that nearly one-fourth of smack users also develop addictions to opioid medications.

The number of heroin deaths in 2017 is provisional, yet it is expected to be higher than ever.

Heroin Around The World

Heroin has been the most commonly used illegal opioid for decades.  Over the last few years, the opioid supply in the United States has soared. The drug can now be obtained for three times less than what it was worth in the early 1990s. How much is heroin? It depends on the location – prices vary from as low as $1.90 per gram to as much as $1300 per gram.
Hundreds of people die from overdoses in the US every week, and experts predict this number will continue to rise.
The epidemic has reached such a scale that it is becoming a drag on the US economy and a national security risk apart from the risks it poses to public health. In recent years, the U.S. government has increased efforts to cut both the foreign and domestic supply of heroin while providing counter narcotics assistance to countries like China and Mexico. Federal and state officials have tried to reduce demand by focusing more on treating drug users and less on punishing them.
Below is a list of cities with the biggest problems:

In October 2017, President Donald Trump declared the drug epidemic a public health emergency and approved allocation of federal grant funds to combat the crisis and reduce restrictions on access to treatment. A presidential commission has recommended establishing and funding a federal incentive to improve access to Medication Assisted Treatment (MAT) and building partnerships with the National Institutes of Health (NIH) and the industry to facilitate development and testing of new MAT treatments. This could prove pivotal for people struggling with unmanageable chronic pain, due to which they have resorted to heroin.
The number of border patrol agents has been increased to approximately twenty thousand, and heroin trafficking and seizure arrests have increased by 50% between 2010 and 2015, mostly near the southwestern border.
The heroin schedule has never changed – it has always been a schedule I drug, defined as a substance with no accepted medical use and high abuse potential.
The treatment-related measures proposed by the government are expected to bring about lower relapse rates, as the quitting heroin success rate is undeniably low at present.

Having a good treatment plan for drug addiction can make the difference between life and death. With conviction, consistency, and patience, a person who needs help can always find it. A professional rehabilitation center for drug addicts can help one set foot on the path to recovery.

Addiction Resource » Addictive Substances: The Anatomy of Drug Addiction » What Is Heroin Abuse: Why Is Smack So Addictive? » Heroin Epidemic: Facts and Statistics on Smack