Fiorinal Vs. Fioricet: Difference Between The Two?

When comparing Fiorinal and Fioricet, it can be difficult for patients to spot a difference. Both are medications designed to treat pain through a combination of two actions: relieving the pain itself and relaxing the muscles that, through tension, are contributing to the pain. Both medications use butalbital as their sedative, muscle-relaxing agent. They also each contain caffeine to increase the effects of their pain-relieving agents.
The primary difference between the two medications lies in which pain reliever they use in their formula. The difference between Fiorinal and Fioricet is that the former uses aspirin for pain relief, and the latter uses acetaminophen.

Because some users may be contraindicated for the use of one of these pain relievers, they may not be able to take both medications.

Both medications have 325 mg of their respective pain relievers, 50 mg of butalbital, and 40 mg of caffeine. They are also both prescription medications. Ultimately, when comparing Fiorinal vs. Fioricet, the right choice comes down to which pain reliever is best suited to the patient. 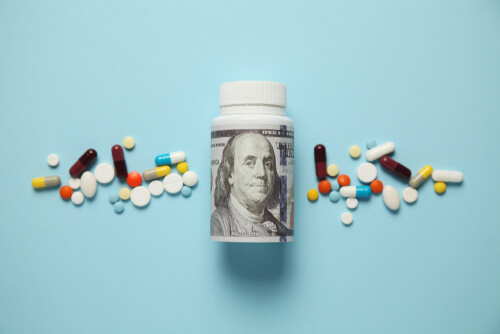 The next major difference between Fiorinal and Fioricet is their cost. When comparing their prices, Fioricet comes out significantly cheaper – $154, while Fiorinal is $573 for 100 capsules of the medication.
For those with comprehensive insurance coverage, this price variation between Fioricet and Fiorinal may not be important. However, for anyone paying out of pocket or those who have minimal insurance coverage, the price variations of medications may decide which of the two they can take.

Why Is Fiorinal A Controlled Substance And Fioricet Is Not?

Yet, another difference between Fiorinal and Fioricet is that the former is classified as a controlled substance by the DEA, while the latter is not. On the surface, this does not make a lot of sense. Both have the same amount of butalbital, which is the substance in the medications that can be abused and may be addictive for some users. This difference between Fioricet and Fiorinal comes down to some seemingly arbitrary rules.

Uses And MOA Of Both Medications

Both Fioricet and Fiorinal are used to treat tension headaches. Butalbital works by suppressing neuronal excitability, impulse conduction, and the release of neurotransmitters. This inhibition occurs at GABAergic synapses that express GABA-A receptors.
Given that the difference between Fioricet and Fiorinal is their pain-relieving agents, this is where the varying mechanism of actions come into play.

Ultimately, deciding which drug to use is based on which pain reliever better suits the patient. For example, someone with stomach ulcers should avoid aspirin, while those with liver disease cannot have acetaminophen.

Difference Between Fiorinal And Fioricet On Drug Test

Fioricet and Fiorinal as combination medications will not show up on a standard drug test. These tests do not look for things like caffeine, acetaminophen, or aspirin. However, they might screen for barbiturates; the drug class butalbital belongs to. Here is how long butalbital can remain detectable on drug screenings:

Users who have a valid prescription for butalbital containing medications should not need to worry about a positive drug screening unless their job prohibits the use of sedative medications.

Although both Fiorinal and Fioricet have legitimate medical applications, it is possible to become addicted to them. Users who feel they are dependent upon or addicted to the medication should seek treatment for substance abuse. Among many options, drug rehabilitation centers can help to detox and find the right methods for living a healthier life.