Fentanyl is a synthetic drug, with opioid properties. It is commonly used to treat severe pain, or as an anesthetic after surgeries or other medical procedures. This drug alters the way one reacts to pain by binding to opioid receptors in the brain. Dopamine levels are then increased and trigger a state of euphoria.
Fentanyl has similar effects as morphine but is 50 to 100 times more potent. Fentanyl is considered to be a schedule II prescription drug and is available in the following forms: patch, tablets, lozenge, nasal spray, injection, powder, and fentanyl lollipop.

Fentanyl Patch vs Fentanyl Lollipop – The Mode of Administration

What is a Fentanyl Patch?

A Fentanyl patch falls into the category of narcotics. Doctors usually prescribe it when a person suffers from chronic pain, and patients can easily apply it to the skin. This patch is also known as transdermal fentanyl; it works by releasing regular Fentanyl doses over a given period of time.
The patch is usually applied once every 72 hours and comes in various dosage amounts: 12.5 micrograms/hour and 100 micrograms/hour. The dosage depends on the patient’s prior medical condition and opiate tolerance.

What is a Fentanyl Lollipop?

A Fentanyl lollipop is an opioid medication, also known by its brand name – Actig. Unlike the patch, it combines Fentanyl and citrate to produce pain relief. The lollipop absorbs through the patient’s mouth’s mucous membrane. Fentanyl in combination with non-active ingredients such as citric acid or powdered sugar creates a sweet berry flavour to be taken in the form of a transmucosal lozenge. 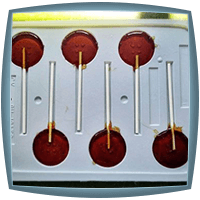 Fentanyl lollipops should only be used for treating breakthrough pain in cancer patients. That is a very slim category of use, which highlights the fact that Fentanyl should not be used for general pain management. Unfortunately, cancer patients experience pain on a daily basis but breakthrough pain is different. It is defined as a short-term exacerbation of pain in patients who consistently experience persistent but stable pain. Among patients with moderate or severe pain, it is estimated to affect over 50% of patients. This form of Fentanyl is only recommended for cancer patients who are over 16 years old and have developed a tolerance to other opioid painkillers they are currently taking but continue to have uncontrollable pain. This can be a last resort in many cases, due to the fact that fentanyl is 50-100 times stronger than morphine.

Everyone must be extremely careful when beginning treatment with ACTIQ. As stated before, it is only ever to be used by cancer patients with uncontrollable pain and patient must wait no less than 4 hours between each fentanyl lollipop. If used for any other reason or more frequently it is considered Fentanyl abuse, and can have lasting effects on the body and even be fatal.

The lollipop comes in different dosages – from 200 to 1600 micrograms, depending on the patient’s health condition and tolerance to pain medications.

Doctors recommend both medications for patients who have already used other opioids and developed a tolerance.

When is a Fentanyl Patch Used?

A Fentanyl patch is used to manage severe chronic pain in cases when a constant, non-stop treatment is needed over a longer period. A Fentanyl patch provides permanent pain relief, mitigating the patient’s situation.

When is a Fentanyl Lollipop Used?

As explained above, Fentanyl lollipops are most commonly administered to cancer patients to alleviate breakthrough pain. Unlike a Fentanyl patch, the candy acts immediately. However, its effects shortly fade.

The patch may cause the following side effects:

Some of the most common fentanyl lollipop side effects are:

As America struggles with an opioid epidemic, Fentanyl is one of the most deadly drugs being misused. As it stands 6.5 million people are currently abusing prescription medication and out of that number 66% are abusing opioid pain relievers such as Fentanyl.
But what does it mean to abuse a prescription painkiller? There are three ways this can happen, through:

Anytime someone uses the Fentanyl patch or lollipop in any way other than prescribed this is considered abuse. Misusing the fentanyl lollipop is especially dangerous due to its strength but also how quickly the effects begin and how short they last.
The effects of a Fentanyl high are similar but more intense than a heroin high. This may surprise some, but Fentanyl is actually more potent than heroin, which is why it is often cut into heroin on the streets. They have similar effects including providing the user with a euphoric high, relaxation, both physical and mental, drowsiness and pain relief.
Even someone who has used other forms of fentanyl medication in the past but decided to abuse a Fentanyl lollipop may be unprepared for the intense and quick effect.

This can lead to respiratory depression and other serious health consequences, ultimately leading to an overdose or death.

Aside from the high that Fentanyl produces there is also a long list of unpleasant and possibly dangerous consequences of its abuse. They can be divided into physical and psychological symptoms.
The physical symptoms include:

Serious side effects of Fentanyl lollipop use include:

This last symptom can be the most fatal because the drug slows down the central nervous system, affecting breathing and in worst case scenarios, stopping it.

The risk of a Fentanyl overdose while using Actiq exists for both those abusing the drug and those using it as prescribed. The possibility of that happening is higher if Fentanyl is mixed with other drugs, especially depressants like alcohol or other sedatives:
An Actiq overdose includes:

An overdose is often fought with large doses of naloxone, a drug which reverses the effects of opioids. Higher doses and multiple applications are commonly needed because patients using Fentanyl medication have built up a high tolerance to opioids. Naloxone may be used nasally or intravenously.

Both of these two Fentanyl forms are considered to be highly addictive. Addiction is manifested by a strong desire to continue with the substance use regardless of the obvious negative impact it has on one’s body and mind.
The Fentanyl patch, when approved by the FDA, was required to have a warning label that indicated its high addiction potential. The notice stated that it is only meant for those who are currently using an equivalent dosage of other opioids. Otherwise, an overdose may occur.
The Fentanyl lollipop is also a powerful substance which can cause addiction. A person addicted to Fentanyl lollipops may demonstrate the following signs and symptoms:

As with many prescription pain medications, the continued use of lollipops or patches may build up a tolerance in the body towards Fentanyl. That means that the same effects will not be felt with the patient’s usual dose, requiring the patient to use more and more to achieve the same result. This is one of the reasons it’s so important to remember that Fentanyl lollipops are only to be used by cancer patients for breakthrough pain.

People who overdose on Fentanyl and are revived by the use of Naloxone may experience withdrawal symptoms quickly after the drug is administered. Withdrawal happens when body has become dependant on a drug to function and then is deprived of that drug. The body tries to restore balance leading to symptoms like:

Needless to say, an overdose may occur. To aggravate the situation, the risk of an overdose increases when individuals combine Fentanyl lollipop with other substances like alcohol or sedatives. No matter the form in which it is used, Fentanyl causes severe side effects, and its abuse may end fatally.