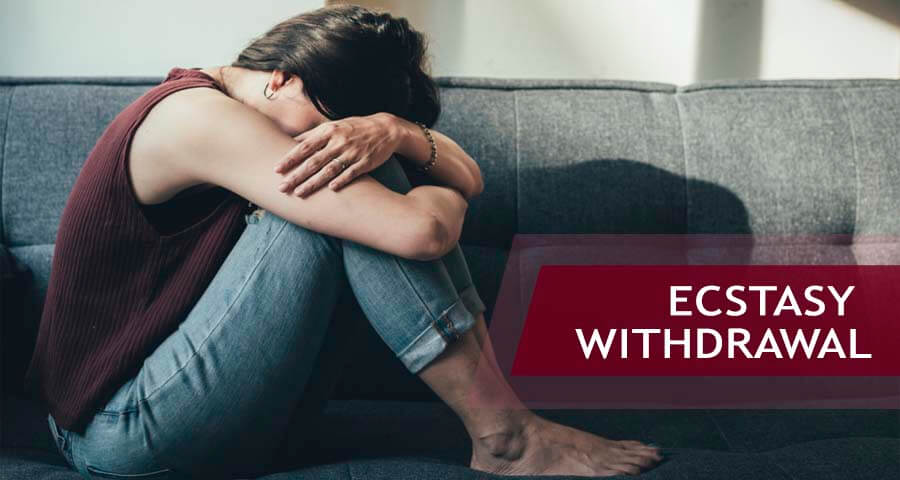 Considering quitting Ecstasy, but not sure what to expect? Why do withdrawal symptoms appear at all?
What kinds of symptoms are likely to occur? When is their onset and how long will they last? Is there a risk of a relapse? What to do to make it easier? Here are the most commonly experienced MDMA withdrawal symptoms and answers to the above questions.

Withdrawal symptoms occur because Ecstasy causes a chemical imbalance in the brain. By artificially stimulating neurotransmitters to achieve the desired effects, the stock of these brain chemicals is used up much faster. So when the drug effects wear off, there fewer neurotransmitter molecules left to do their usual job and are less efficient in regulating physical and psychological functions. These are withdrawal symptoms.
The bad news is that withdrawal symptoms will last until the chemical balance in the brain is restored.
But the good news is that Ecstasy is considered to be less addictive and the withdrawal phase easier to handle than for other harder drugs (ex. cocaine) however this is not an indication of safety.
This means:

For a while, this vicious circle continues, but eventually, the rush becomes difficult to reach. All that with the cost of immediate physical danger and inevitable harsh comedown consequences once the drug is used up by the body.
For some people, this realization is enough to decide to quit taking Ecstasy. Ex-users mostly quote concern for health as the primary reason for stopping. The body became used to functioning with the drug, and now it is adapting to operating without it. So this implies a series of possible Ecstasy withdrawal symptoms in the recovery period.

Some effects begin immediately after the drug becomes inactive. Some will last several days, others weeks. Both physical and psychological effects will come into force at some point in the withdrawal process. The physical symptoms will vary from case to case but should not be very draining, however users must be prepared for mental challenges.
Be persistent: the first week will be the most challenging, but all symptoms gradually fade.

After 3-6 hours of MDMA, molecules stop working on the brain. The body suddenly finds itself deprived of the desired effects and signals its craving by sudden and uncontrolled behavior or sensations.
Unpleasant comedown effects happen every time after addictive substance use. What makes this phase especially challenging, is that it directly followed the “high” stage. The user perceives a considerable contrast between pleasant and unpleasant experiences. Many symptoms are psychological at this point:

It takes up to three days for MDMA to exit the body.
While the system is working on getting rid of all molecules of this substance, here is what side effects this might induce:

Now that the body ejected all traces of MDMA, it will try to go back to the way it worked before running on the drug.
The previous symptoms usually peak, and some people additionally experience:

That is the most challenging phase where intensive adjustments take place in the body. But past this phase, all symptoms will weaken with time.

Do 90 days seem long? It is the average drug withdrawal period in general, and it does not mean one will stick in that phase for that long.
It all depends on the individual situation. Also, the more time passes, the more symptoms have vanished.
Cravings continue, but insomnia, concentration and memory problems eventually fade.
Depression is the most stable side effect. It is a mix of brain chemistry getting back to normal and the need to find a way of functioning in a drug-free environment. The person faces reality and needs to decide how to move on the drug and how to feel fully reinserted into society.

Keep in mind that every user is in a unique situation. That is why it’s impossible to predict precisely, which symptoms one will experience how strongly.

The Risk Of Ecstasy Relapse

There is always a risk, but it depends on the situation and how much time passed since one quits taking Molly.

During the Ecstasy Withdrawal Process

People do crave for the drug, mostly wishing to end their (temporary) suffering. Outside a supportive and controlled environment, such as an inpatient clinic, they are at a relatively high risk of getting back to the drug.
During this phase, the body is already in the middle of readjusting and particularly vulnerable. And desensitized by a prolonged period without MDMA, the brain is more receptive to it. In this stage of physical vulnerability, previous doses might lead to overdose. That is dangerous for the heart, liver and could even be lethal.

Having a support network is crucial. Depression can stay for several months or years. If it is untreated, one risks the relapse to Ecstasy or another form of addiction. A supportive surrounding (family, friends, community) and therapy are very effective in overcoming depression and gaining knowledge on how to transition into a functional life. The ex-Ecstasy user will have much less ground or reasons for relapse.
A German longitudinal study showed that 93% of 2446 studied Ecstasy-users were no longer addicted to MDMA after three years. Among them, 50% quit using the drug altogether. 43% still used it, but without meeting the criteria for a substance abuse disorder. The authors even suggested calling Ecstasy a transient phenomenon, which sounds encouraging.

There are different ways to enhance withdrawal process considerably.