Ecstasy Side Effects – Knowing What To Expect 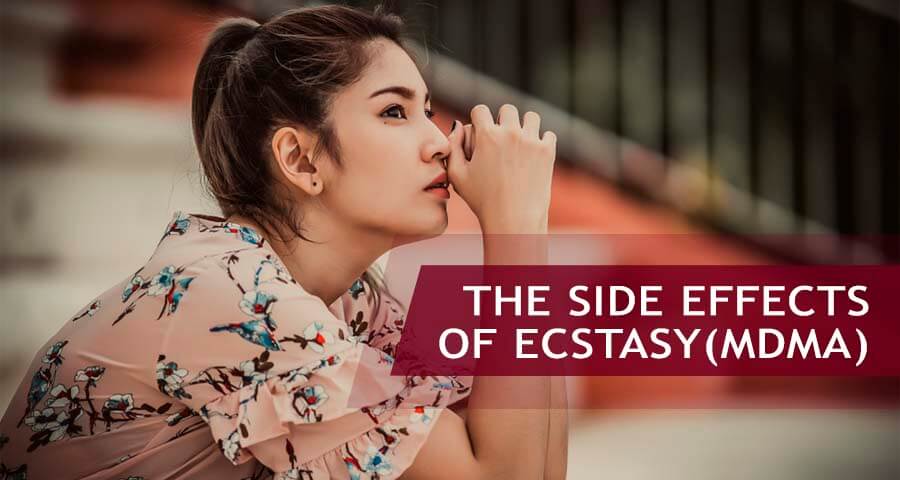 MDMA affects all users differently. It all depends on how the drug is consumed: how much, for how long and how frequently.
The side effects will be much heavier for people using strong doses every day for a long time compared to occasional users. Also, women tend to experience greater effects than men. General health also contributes to how a user will bear side effects. If a user has no other mental or physical conditions and maintains a healthy lifestyle – it’s to be expected that adverse reactions will be kept at a minimum. However that does not mean that ecstasy use is safe: keep reading.

Ecstasy pills are usually a mix of many substances, adding up to MDMA side effects.

One can expect the first results after 15-30 minutes after ingesting an Ecstasy pill. The rush will last for 3-6 hours, where the desired stimulating and hallucinogenic effects will take place.
Shortly afterward follows what is known as the comedown, the first withdrawal symptoms.
Should users take ecstasy day after day positive effects will get weaker and weaker and painful side-effects will get stronger.

The first sensations appear 15- 45 minutes after taking the pill.

But be aware, that during drug rush, the body is not demanding its basic needs. If the user gets dehydrated, too warm and exhausts the body, they are in danger of physical harm.

Some people take several pills at once (‘stacking’) to have greater sensations. Others take several doses in a row (‘piggybacking’), as soon as the effects fade.
Both practices are dangerous because the potential negative effects of Ecstasy may also be much stronger.
This drug overload causes a massive and sudden imbalance in the brain. As a result, the brain works less efficiently.
What can happen to the body in case of an overdose:

These effects are severe, a heat stroke or a heart failure can lead to death.
So if a user showing these symptoms, call an ambulance immediately and inform the crew what has been taken so that they can administer effective treatment.

After the drug molecules stop working, the body tries to get back to its normal state. During this time, the user will experience withdrawal side effects of Ecstasy, basically the opposite of the drug’s effects.

Due to the brain imbalance, users will feel depressed

Occasional exposure to MDMA gives the brain time to get back to its normal state. Unpleasant effects usually reverse over time. However a continuous consumption of the drug doesn’t give the brain a chance to go back to its baseline activity. That means that the brain chemistry is continuously imbalanced, and some Ecstasy side effects in behavior begin to develop.

At this stage, the chemical imbalance doesn’t return to its normal state, and the brain structure changed. Some brain functions could potentially recover after drug withdrawal, but the damage to some functions is irreversible.

Psychological symptoms can be:

At the same time, one will feel the following physical effects:

At this point, the risk of arrhythmia or heart failure and kidney failure is substantial. Remember that the heart and the kidney are vital organs. The stronger the doses, the more frequent and longer a person uses them – the greater the risk of also damaging brain tissue.

After long-term consumption of Ecstasy, the previous side effects are getting stronger, and new ones can appear.
Psychological effects are now clearly visible to others:

The body is dangerously affected:

Stopping to take Ecstasy will in time restore the natural brain chemistry. The brain will have enough neurotransmitter molecules to be able to do its job. It all depends on the severity of the physical dependence and overall health, but after six weeks, people usually don’t experience side effects anymore.
Studies on monkeys show that two weeks after high daily doses, MDMA intake serotonin is almost entirely wiped out from the system. Its level increases gradually but doesn’t achieve its original levels even after seven years.
During long-term MDMA abuse neurons were destroyed, and the brain structure changed. Most of the behavior and even physical health can return to normal, but some damages are irreversible.
One can expect a relatively normal life after quitting Ecstasy and taking care of physical and mental health. Sadly though the chances are very high, that the memory will never be the same again.

In a Nutshell, What Are the Risks?

At first, there is the risk of dependence due to wanting adverse withdrawal effects to be counteracted. Then, the risk of psychological addiction, by the craving to experience more drug rush.
After some days or weeks, brain chemistry might be imbalanced and behavior less under control. It will last as long as the user has the drug in the system or the brain has not recovered the right amount of neurotransmitters. Users might experience temporary emotional and memory impairments.
After several months of exposure, the brain structure irreversibly changes. Being regularly exposed to Ecstasy, the brain did not have a chance to recover its neurotransmitters. Nerve cells were damaged, so that memory and other cognitive functions significantly decrease. By that time, other organs could deteriorate, like the heart and the kidneys.
Always, when being under the influence of a drug, users risk physical danger. Ecstasy tempers vital signals from body and users can quickly fatigue their heart, kidneys or cause heat exhaustion. So, without paying attention, even a first time user risks straining these organs. Too much of any of these symptoms can be fatal. Even a first time user can risk an overdose or torment the drained body to death.
Pregnant women taking Ecstasy affect their child’s growth. Some women don’t know about their pregnancy and stop taking drugs as soon as they find out. But the damage is done.
Babies exposed at any point during pregnancy to MDMA have poorer motor control and slower development than the average. At the age of 4 months, they were less coordinated and had slower and delayed movements.