High On Ecstasy: How MDMA Makes One Feel 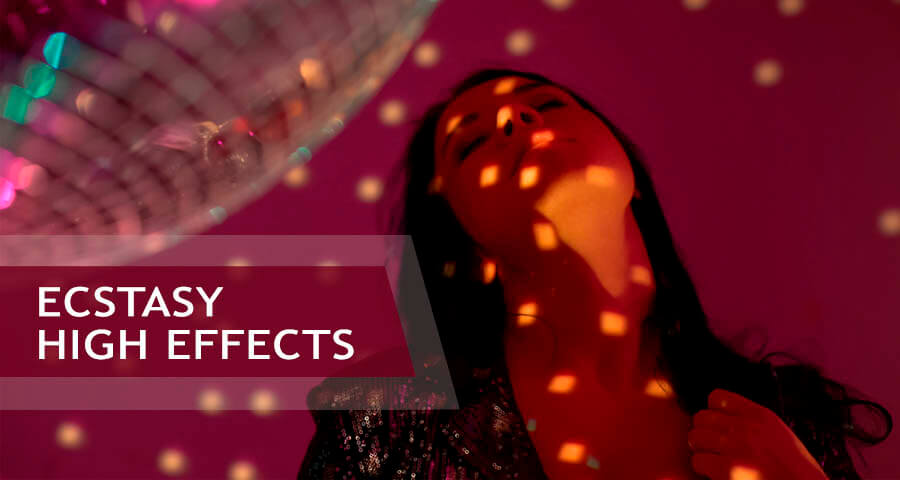 Ecstasy is a popular party drug that is associated with rave, EDM and dance music cultures, all of which involve partying for extended periods of time. When raving, people high on ecstasy have the stamina and desire to dance for the duration of the concert without any breaks. When a person is high on MDMA, their need for food and sleep become reduced and their need for of water and  to stay hydrated. Feelings of euphoria, well-being, and sensual arousal become elevated. These qualities of ecstasy make it attractive to partygoers of all ages. In this article, the question “What is an ecstasy high like?” will be discussed to shed light on this popular party drug with unknown ecstasy side effects.

What’s in the Pill?

MDMA use has risen and fallen over the years since its discovery in 1912, it started to become popular in the club scene in Europe in the 1980s. Since its first synthesis the composition of ecstasy pills has also changed. While users may talk about a molly high, in many cases, the MDMA ingredients in the pill often vary with other additives being present to give the tablet the desired effect. Here are some of the most popular ecstasy ingredients below.

3,4-Methylenedioxymethamphetamine is the original substance that became known as ecstasy. As a psychoactive drug, meaning it can cross the blood-brain barrier and affect the brain directly, the substance has certain effects that make a high on MDMA something users find positive. These effects include feelings of euphoria, empathy, social awareness, heightened sensory appeal especially to music, and an increased desire for sex. MDMA will induce an ecstasy high length of up to 6 hours, where the person has a sustained experience of the effects.

MDMA also causes increased temperature and water retention causing essential salts to become diluted, both of which can be fatal.

Caffeine is a psychoactive stimulant belonging to the methylxanthine class of substances. It acts by stimulating the central nervous system (CNS) and blocking the action of adenosine, a substance that causes drowsiness. Today most ecstasy pills have caffeine in them to mimic a molly high. For people who have experienced an MDMA high in the past, caffeine often provides a slightly dissimilar experience. Inexperienced users, however, cannot tell the difference. The substance is legal and unregulated and so easily available for inclusion in ecstasy pills.

Amphetamine is the base substance for a structural class of drugs called substituted amphetamines. MDMA, cathinone, methamphetamine, and others belong to this class of drugs. Inclusion in ecstasy is favored as it provides stronger effects than MDMA. A molly high that involves amphetamine as an ingredient will include similar effects as those of MDMA. The major difference is that, unlike MDMA, it causes rapid drug tolerance in users, significantly increasing the risk for addiction to the tablets sold as ecstasy.

Cocaine is another psychoactive substance used that can easily cause addiction. Cocaine acts by changing the reward pathways in the brain, causing strong feelings of happiness and excitement in users.

A person who uses this substance even briefly faces a substantial risk of forming a habit.

Pills that contain cocaine are therefore an unanticipated risk for people taking them. While the results may be mistaken for those of MDMA, not all are similar and may cause a different set of adverse effects and withdrawal symptoms. 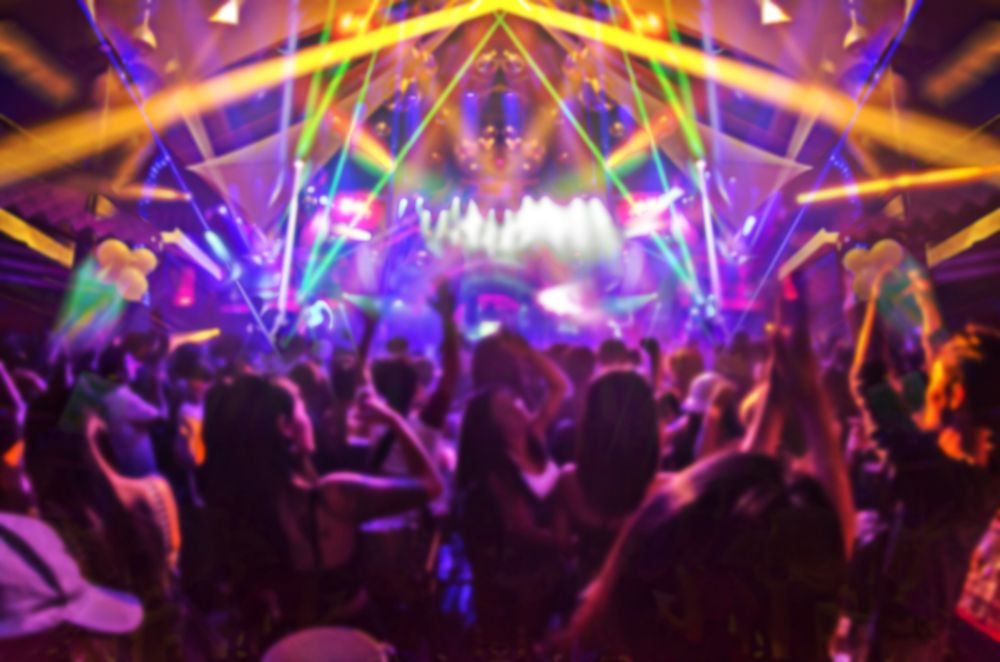 The most noticable MDMA sensation is a feeling of euphoria. Because the substance deregulates serotonin uptake, the body gets an abnormal supply of the neurotransmitter, resulting in extended periods of happiness and general euphoria. A person experiencing euphoria will feel they can enjoy stimuli such as music better while in this state.

Coupled with the deregulation of serotonin, the substance also causes the release and slowed uptake of dopamine and norepinephrine. This induces a feeling of self-confidence and machismo. People on molly will often be gregarious and open to speak to anyone. Such persons will also be willing to do things they would naturally not be predisposed to do.

MDMA has been prescribed in small doses as an entheogen due to its ability to increase feelings of empathy in a person using it. Using ecstasy in higher doses, therefore, causes elevated levels of empathy and emotionality, both exhibited in the form of gestures of love and affection. This effect characterized the empathetic culture of the Love Parade in Berlin in the 1990s.

Ecstasy high effects also induce low levels of hallucinations. A person on an ecstasy high will experience an altered perception of reality including sound, touch, and vision. However, the hallucinations are not as strong as those in stronger hallucinogenic drugs like mushrooms and LSD.

Perception of time is also altered when using MDMA. A dose will make a person forget about the passage of time when they are at a party and give them the ability to dance for extended periods of time. This sensation makes the person feel as though they have been experiencing the ecstasy high for a longer time than they have.

People who use the substance report that they acquire a sense of invincibility while on the drug. When in this state, a person can take unnecessary risks to prove this invincibility. When coupled with the sense of euphoria, there is every possibility that this can lead to dangerous outcomes, in addition to this there is a reduced perception of pain meaning should a user injure themselves they may not be aware of the damage caused.

Heightened sexual arousal is associated with risky sexual behavior exhibited by people who use the drug. This coupled with an enhanced feeling of euphoria, emotionality, and invincibility often lead to people having indiscriminate sex with total strangers, a dangerous trend that can lead to sexually transmitted diseases and other problems if suitable protection is not used.


An ecstasy high may have some desirable effects, but the adverse outcomes can be devastating and even deadly.

What are the MDMA After-the-High Effects? 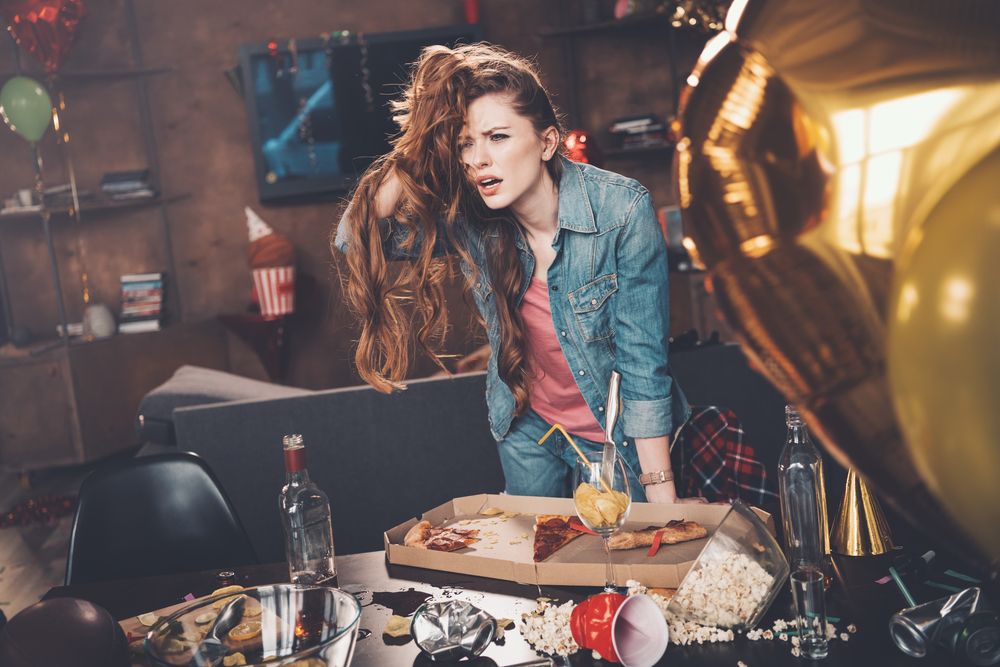 How Long Does an Ecstasy High Last?

Depending on the dose, the effect will take less than an hour to kick in and go on to last for anything from 3 to 6 hours. During this time, the consequences will plateau, and no additional effects will be experienced. Some people will take an extra pill, known as bumping, to extend the MDMA high length which is not necessarily a safe action to repeat. However long the results last, what follows is an ecstasy withdrawal otherwise known as a comedown.

MDMA After the High

As the effects begin to wear off, the person will start to experience what is known as a drug comedown. Serotonin, dopamine, and norepinephrine supplies are depleted, and the body is entering a period of recovery where these neurotransmitters are not available at standard levels, leading to several after-effects.

Depression kicks in because serotonin, the neurotransmitter that regulates these feelings, is depleted. People describe this feeling as a sense of hopelessness and lack of motivation to do anything. People feeling this way may look to other drugs to curtail these effects or bump some more ecstasy to skip these feelings and get back to feeling good.

Owing to the extreme empathy and emotionality that comes with an ecstasy high, once it wears off the person may feel like all the people they thought they were close to having suddenly abandoned them. They may also feel a sense of betrayal when they realize that the close social connections they thought they had were in fact fictionalized. This coupled with a return to healthy life may induce feelings of loneliness and seclusion, and in many cases, a desire to seek out a means to get more drugs and get high again.

Ironically, people who use the drug will be able to stay awake for extended periods of time but once the drug wears off, will still find it difficult to sleep. The primary cause is the depleted levels of serotonin, which also regulates the sleep centers of the CNS. This effect represents yet another risk to people who take the drug as it brings on thoughts of regret and similar negative thoughts.

What does ecstasy make a user feel like? It makes a person feel like they are capable of anything. It makes users also feel as though they could go on partying forever, like they never have to stop. The reality is different. Most people who use the substance report a sense of sadness and dissatisfaction after using it several times. While the initial ecstasy high is extreme, tolerance coupled with adulterated pills always makes subsequent ones less desirable.