Dextromethorphan And Guaifenesin, And Other Combinations

There are many DXM uses known in the U.S. both alone in its pure forms, and combination with other substances for a wider spectrum of action. For instance, one of the most popular cough syrups with dextromethorphan contains guaifenesin (an expectorant). Hydrobromide form of dextromethorphan medication class can be combined with various other substances to produce better anti-flu effect.
Other popular medicines with DXM may combine dextromethorphan and chlorpheniramine,  phenylephrine or diphenhydramine what creates new medical purposes.
It’s important to note when buying dextromethorphan combined with other medications in any form, that they usually have about the same concentrations of active ingredients regardless of product shape.

Which cough syrup contains DXM and guaifenesin inside together? Robitussin DM and Mucinex DM are used the most often. The medications consist of both dextromethorphan and Guaifenesin only and differ in the proportion of the composition.

Robitussin DM is one of the most popular DXM-containing medications for both medical and recreational purposes (hence the slang term “robotripping”). This is why people who robotrip often mix alcohol and dextromethorphan medication Robitussin DM. Guaifenesin thins and loosens the mucus in respiratory pathways. 20 ml of this medicine contains 20 mg of cough suppressant and 600 mg of guaifenesin. A maximum dose is 3 x 20 ml per day, each dose being separated from the other by 4 hours. A person may become dextromethorphan drowsy in case of taking/exceeding more than 4 doses, which is strongly not advised due to adverse reactions. Other side effects include:

Сhildren under 12 years of age should abstain from this cough medicine, while dextromethorphan child dose for those over 12 years of age is 5-15 mg per dose. Avoid taking Robitussin DM with any of these drugs: isocarboxazid, selegiline, or rasagiline. 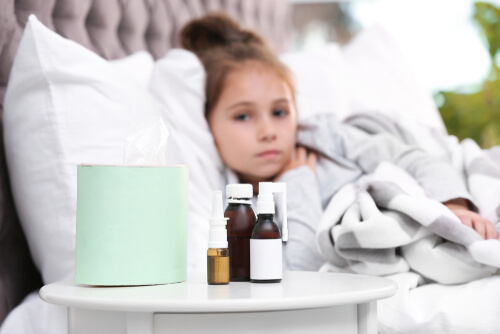 The most frequent side-effects of Mucinex DM:

Individuals with a rare disease called phenylketonuria should avoid taking this medicine.

The difference between Robitussin and Mucinex is that Robitussin acts mainly as a cough suppressor, while Mucinex mainly works as an expectorant.

This medicine is used for eliminating symptoms like cough, chest and other respiratory congestion, other symptoms like stuffy or runny nose, caused by flu, common cold, or allergies.

Before taking Vanacof DM, keep in mind that some side effects may appear:

Vanacof DM will unlikely eliminate cough related to asthma or smoking. People with cardiovascular diseases, diabetes, or epilepsy should consult their doctor before consuming this cough medication. 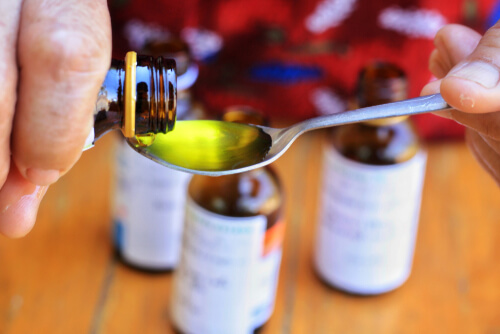 These active ingredients found in numerous flu medications (Duraflu, Theraflu Max D Severe, Maxiflu DM, and others). Active ingredient acetaminophen relieves pain and is best for headaches and body aches. And the pseudoephedrine, like phenylephrine, shrinks blood vessels in the nose thus eliminating nose congestion. People can have allergic reactions to acetaminophen, the most alarming of which is a severe skin rash. If one experiences this, don’t hesitate to call 911 or another emergency line. Other side effects include:

People with alcoholism, liver disease, and high blood pressure should consult their physician before Duraflu administration.

There are many cough medications that contain dextromethorphan, guaifenesin, and pseudoephedrine together in different proportions and Despec DM, Capmist DM, Maxifed DM are the most common.

These medicines are used for symptoms of hay fever, common cold, and nasal congestion, and swelling. Allergic reactions like hives, swelling, and difficulty breathing may appear when taking Despec DM, while the most common side effects are:

Despec DM won’t help with the cough caused by emphysema.

Cough medicines with dextromethorphan and quinidine are not used for treating symptoms of a common cold. These medicines are used for a completely different medical condition: pseudobulbar affect (PBA), which is a syndrome that co-occurs with ALS and Multiple sclerosis.

Pseudobulbar affect is characterized by unexpected outbursts of laughter or crying, and quinidine relieves these symptoms by increasing the amount of DXM in the body.

As a result, using these medications significantly lover DXM dosage to overdose. One such medicine is Nuedexta.

These are some of the most common side effects of this medication:

People with a serious heart condition should abstain from Nuedexta. Individuals who are also taking quinine or mefloquine should not take Nuedexta, at least not before they stop using these drugs.

A mix of dextromethorphan and diphenhydramine is primarily used for the treatment of allergies. Benadryl will help people with symptoms of seasonal allergies, hives, and insect bites. Diphenhydramine, as most medicines for allergy, is an antihistamine, which precludes histamine-induced swellings, and vasodilatation (expansion of blood vessels).

Benadryl won’t help with a more intense, severe cough. Taking this medicine extensively during pregnancy or breastfeeding is not advised.

Acetaminophen is an efficient pain reliever, which is used for the treatment of more severe cases of cold and flu. Together with DXM, acetaminophen will attenuate symptoms like headache, body aches, sore muscles. Often, these substances are paired with decongestants and expectorants to produce the best results in the battle against allergies, common colds, and flu. Medications with acetaminophen may cause severe skin rash with blisters, which is a potentially deadly allergic reaction to this drug.

People who are taking MAO inhibitors should stop taking these drugs at least 2 weeks before acetaminophen/dextromethorphan therapy.

Some of the most versatile and diverse common cold remedies contain acetaminophen, dextromethorphan, guaifenesin, and phenylephrine.  It will relieve symptoms of fever, like aching joints or muscles, and high temperature. Theraflu will also clear respiratory passages and loosen up the congestion. It is not uncommon to feel adverse reactions like:

Individuals with the overactive thyroid gland, glaucoma, and liver diseases should consult their doctor before taking Theraflu Max D Severe. 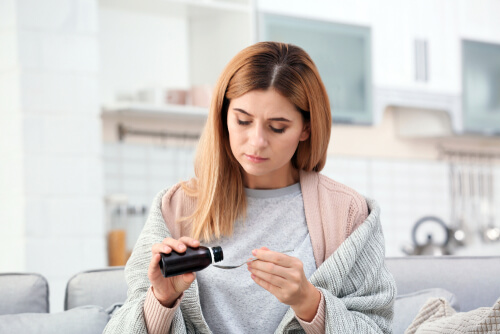 Tylenol is sold as a headache and pain reliever. It can be used for arthritis, toothaches, menstrual periods, and of course, fever, muscle, and joint aches.

It might not be the most efficient alternative for the treatment of intense cough and congested chest.

Taking this medicine with dextromethorphan and warfarin will aggravate the warfarin’s effects, as Tylenol might decrease the speed of blood clotting (nose bleeding, bleeding gums, etc.). Warfarin prevents the formation of blood clots.

Promethazine DM will also suppress an acute common cold cough. Due to promethazine, this medicine may cause some side effects, such as:

Promethazine DM, as a typical cough remedy, might not the best option for the treatment of chronic respiratory diseases such as bronchitis, emphysema, and asthma.

In most severe cases, Bromfed can cause:

People with asthma, emphysema, or chronic bronchitis should contact their doctor before taking Bromfed.

DXM Containing Medicines: Which One Is Better To Choose?

There are many medications containing DXM, and a lot of different combinations, which sometimes have different effects. For instance, Robitussin DM will work against flu and cold, and especially against chest congestion (thanks to guaifenesin), but is not suitable for allergies. DXM medicines with antihistamines, such as brompheniramine and chlorpheniramine, will help with hay fever and other allergies. Usually, it is possible to find alternative forms for these combinations like DXM capsules with guaifenesin, which might be useful for people who don’t like syrups. 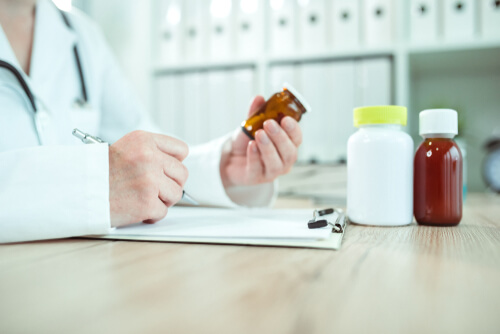 However, just as all these chemicals have certain benefits, there are some downsides and possibilities of abuse. DXM, especially when combined with other active ingredients, may lead to drug overdose and DXM plateau sigma, which is the most severe form of overdose. Chronic consumption of all drugs mentioned in this text warrants special treatment.

Is it possible to detox from dextromethorphan and other common cold medications? There are various rehabilitation institutions, the basic part of which is detox therapy. For psychological detox, there are psychotherapeutic programs and addiction treatment options.

Studies pertaining to the question of dextromethorphan and breastfeeding are still scarce, but other chemicals that are present in cough and allergy medicines may be harmful.