Dilaudid is an opioid pain medication, also known as Hydromorphone. It is used for treating a broad spectrum of different pain levels – from moderate to severe. Like other pain relievers, it affects the brain by changing the way the body detects and responds to pain. Essentially, it increases the threshold of pain tolerance. Particularly, it increases in the central nervous system. Thus, Dilaudid binds to opioid receptors, which also affects the respiratory reflex. Overall, due to the influence on the respiratory centers in the brain-stem. This effects and reduces responsiveness to carbon dioxide tension. It can cause very deep sleep. It can be found in the form of ampoules, tablets, oral liquid, and sterile solution form.

Potential side effects during Dilaudid treatment are many:

Research has shown that 2mg of Dilaudid provides rapid pain relief. However, anything above 2 mg is too much if given routinely to a patient in pain. Even a single dose can cause oxygen desaturation.
It begins to work within 30 minutes for oral, and 5 minutes for injectable forms. As such, the usual adult dosage of tablets is 2 mg to 4 mg, orally, every 4-6 hours. Finally, anything above 4 mg at a time is considered dangerous and can cause an overdose.

What To Avoid During Dilaudid Treatment? 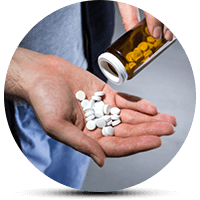 Although regulated, Dilaudid is still one of the most abused drugs today. Like other opioids, it has a great potential to be addictive. Overall, this medicine is also considered to be a recreational drug. It is like this because of the euphoric feeling it causes. Thus, the number of recreational users of Dilaudid is increasing every day.
The best way to avoid complications related to Dilaudid use is to consult a doctor. Especially if one suspects someone has overdosed, call 9-1-1 as soon as possible. Also, make sure to provide any helpful information about the person’s medical history, their weight, and the amount of drug taken, etc.
The signs that show that a person has Dilaudid overdose are the following:

All in all, it’s not unusual that Dilaudid overdose leads to more serious complications such as coma or death. That is why it is important to react right away when some of these symptoms are noticed. Overall, when respiratory pathways are at stake, every second count.
Long-term effects of Dilaudid abuse include physical and psychological health problems, as well as social and legal problems:

After admitting a person who has overdosed to a hospital, doctors may use different methods to cut the drug’s impact. The most common procedure is to give the patient activated charcoal. They use charcoal to prevent the body from absorbing more of the drug. A stomach pump may also be used to remove the drug from the body.
Depending on the time passed after the overdose, recovery is possible after a few hours. But in more serious cases, the process may take longer. Thus, withdrawal symptoms may begin within hours after the last dose. Thus, it may persist for several days, even weeks. Some of the symptoms are:

Many people seek help in detox programs, support groups, and medical interventions. Learn more about how to recognize and help the people in need by visiting this site.