Demerol Addiction Signs and Symptoms – A Quick Guide for Beginners

Demerol, a brand name for Pethidine, is an artificially synthesized opioid. It is in common use as a strong painkiller (for instance during childbirth). It belongs to the phenylpiperidine class of medications and has similar effects to those of Morphine. The drug is also sold under the brand name Meperidine. Originally thought to be a safer alternative to Morphine, they have now established the drug as equally addictive. Furthermore, due to its slow release from the body, even more, toxic than other opioids. Learn about Demerol addiction signs and symptoms.

Like all opiates, Demerol is highly dependency-forming with regular use. The drug works by acting as an agonist at the brain’s the μ-opioid receptors. As a result, this creates an analgesic effect of euphoria, reduced anxiety and an immediate decrease in physical pain.

The presence of opioids causes the central nervous system to change its workings. This way, it can maintain the brain’s delicate chemical balance. Demerol dependency occurs when the central nervous system has adapted to the drug and has trouble with normal functioning without the drug. In other words, withdrawal occurs when the brain no longer has a supply of Demerol.
The manufacturer warns against psychological dependency. This is in the product monograph that’s supplied with the medication.
There are a couple of indicators that one may be at risk of developing an addiction. First, it is developing an increased tolerance for the drug. Second, it is a physical dependency on it. These are the Demerol addiction signs and symptoms. Therefore, one should carefully consider if it worth to continue the use of the drug. Quitting now will be easier than quitting later.

Dependency is not entirely the same as addiction. In some cases, dependency is an indicator that opiate addiction may occur and it will probably occur at a later stage. However, the distinction between the two lies in the behavior of the user.

The manufacturer recommends tapering off the regular use of Demerol as the first step in quitting. Start quitting if any of the following symptoms present:

The above is a check list for the classic symptoms of opioid withdrawal. The withdrawal itself is a symptom of Demerol addiction. Also, most doctors will include it in the criteria when checking for addiction. When more than one of the following are present, it may indicate an opioid use disorder.

Signs For Doctors To Look for Opioid use Disorder

The Diagnostic and Statistical Manual provides insights into the conditions tested for when checking when Demerol addiction signs and symptoms are present.
There is a notable change in definitions and treatments from DSM-IV to DSM-5. It is that the previously clear-cut distinction between Opioid Dependency and Opioid Abuse is now less apparent. In addition, experts now base the difference between the two on the number of criteria that the patient meets.

When it comes to Demerol addiction signs and symptoms, a mental addiction can point to a change in the patient’s behavior and relationship with the drug. Check, if any of these apply to a loved one: 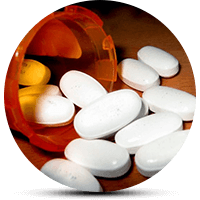 In it, he identified the following stages of addiction and remission. Refer to the above list of questions for psychological addiction.

Signs and Symptoms of Demerol Long-Term Use

Prescription use of clinical opioids has increased by over 400% since 1999. However, heroin use has increased by only 8%. Researchers describe these inconsistent increases in opioid use to the availability of synthetic and prescribed opioids. It seems to be easy to get via the healthcare system and online. When one source or type of opioid becomes unavailable, a user can substitute it for another.

In addition to the signs of Demerol withdrawal and behavioral changes, you should look out for the following Demerol addiction signs:

Any of the above Demerol addiction signs and symptoms can be a red flag. If you notice any of these, you should take note and act quickly before it’s too late.