Meth Recovery: How to Quit & Recover from Meth Addiction? 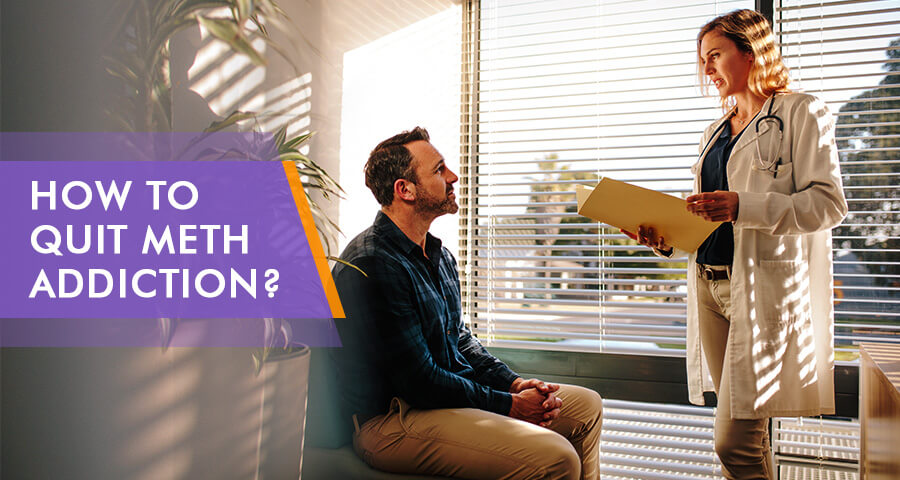 Meth recovery process begins only after a person has suffered enough negative consequences that he or she is compelled to enter treatment. Once in treatment, the addict makes significant lifestyle changes necessary to maintaining sobriety.

Quitting Crystal Meth: How Hard Is It?

The length and difficulty of the recovery process depend on a number of factors, including:

The faster a person’s metabolism is, the less time it takes for the meth to exit the system.

Increasing The Chances of Quitting Meth

The task of quitting crystal meth may seem daunting at first, but quitting and entering into recovery from a meth addiction is the single best decision a person can make for his or her health and overall quality of life.
By understanding the stages of recovery, the process can be made easier.

The Stages of Meth Recovery

The chaotic lifestyle a person leads while she addicted to meth can continue like a roller coaster of highs and lows for a finite period; however, the negative consequences of addiction-fueled actions will eventually catch up to him or her, one way or another. Unfortunately most addicts, meth addicts included, don’t respond to just one negative consequence, or even two or three.
Unless the addict has some extremely pro-active friends and family members, he or she will likely experience a downward spiral. During this stage, an avalanche of troubles ranging from relationship problems to legal issues causes the addict’s world (outside of their addiction) to crumble down around them, often fairly quickly.
The reason why this crumbling stage is necessary is because the first time or two that an addict has to deal with the undesirable repercussions of his or her use, that person usually chalks it up to “bad luck.” While it can be painful to watch, this downward spiral stage is often what pushes the meth addict toward his or her breaking point.
Friends and family can help the addict reach a breaking point sooner by letting him or her deal with the consequences of his or her actions, while still showing love and support by encouraging treatment.

Do Meth Users have to hit rock bottom to have success in recovery from meth addiction?

No! The philosophy that a meth addict must “hit rock bottom” before any form of treatment will be successful is not only an untrue belief but a dangerous one.
For some, hitting rock bottom may be their first arrest or their first jail sentence. For others, hitting rock bottom is losing their job, their house, or even their child. Sometimes, it takes a near-death experience, such as an overdose or another meth-related hospital visit to scare a person into quitting.
However, there are those who will endure each of these devastating consequences and still have an overwhelming desire to use meth. For them, rock bottom doesn’t happen until they are in prison, or dead.
Does it sometimes take suffering severe consequences for a person to realize he or she needs help quitting meth? Unfortunately, yes. But before rock bottom, there exists a breaking point.
This breaking point is the catalyst for a meth addict’s transition into stage two of addiction recovery: the planning stage.

The Planning Stage: Reaching Out or Giving In

A meth addict’s breaking point (turning point) can be voluntary or forced. Some people will eventually realize that all the hurt they’ve experienced, and all the pain they’ve caused their loved ones, just isn’t worth it anymore. Sometimes, a person simply realizes that being locked up in jail is worse than having to abstain from meth. These people may reach out to friends, family, or anonymously via a source found on a flyer, a billboard, television, or the internet.
Others will let either friends and family or the court system decide their breaking point for them; these people give into treatment because if they don’t, they will be homeless, or because they are facing a much longer jail sentence than ones they might have previously faced.
At this point, people—whether it be the addict or the people around the addict—start to develop a plan regarding where and how to proceed with the detoxification process and what kind of treatment they believe will be most effective.
Many people are under the impression that forcing a meth addict into treatment will not work because an addict does not quit until he or she is “ready.” While there are elements of truth to this statement, the concept itself is lacking in perspective.
To put it differently, people find themselves in meth addiction treatment for two kinds of reasons: external and internal. External forces may have persuaded them to enter treatment, but over time, their reasons for staying sober will hopefully become internalized.
Treatment that was once “forced” can evolve into voluntary participation.

Depending on the method one uses to quit, withdrawal symptoms can last anywhere from a week to several months. If a person quits meth “cold turkey,” withdrawal symptoms will reach their peak around the 24-hour mark. However, because different kinds of meth can stay in one’s system for as long as three days, others can expect withdrawal symptoms to peak somewhere between days two and five after their last use.
Those withdrawing from meth may experience symptoms such as fever, nausea, and vomiting, body aches, tremors, increased appetite, fatigue, mood swings, anxiety, depression, paranoia, psychosis, an inability to experience pleasure (anhedonia), and other effects.
The first part of withdrawals is also known as the “sleep, eat, drink” phase. Rest, fluids, and a healthy diet will help a person to recover faster from the damage the drug has caused to their bodies, just as from any illness.
Because of the severity of the withdrawal symptoms one experiences when quitting meth, it is advised to go through the main part of the withdrawal stage under the supervision of a medical professional.
Those looking for a safe way to detox may enter into an extended inpatient rehab program if other methods have been tried and have failed, or a shorter-term detox program as a more cost-effective alternative.
<3>The Treatment Stage: Making the Necessary Changes

The length and type of treatment a meth addict needs depends on the severity of the addiction. The more intensive treatment experiences take place in 30-, 60-, and 90-day inpatient rehab facilities, where patients learn how to cope with their addiction first, and are then expected to implement what they’ve learned once they’ve left the facility. Outpatient rehabilitation programs allow patients to live at home and require them to participate in meetings and therapy sessions multiple times each week; outpatient programs are useful in that they help patients to work through real-life problems as they occur.
With either treatment method, patients learn a new skill set that will help them to succeed in leading satisfying, sober lives.

There will be a number of ups and downs throughout the recovery process. For some people, just a few weeks of sobriety will have him or her feeling fantastic. These few weeks without meth have allowed the body to partially replenish what it has lost in dopamine production, causing feelings of joy, positivity, and strength.
Cravings may become less severe, and anhedonia begins to subside— life starts to seem interesting again. This is called the “honeymoon” phase, or the “pink cloud.” Some experience it, while others do not. If a person withdrawing from meth experiences this “honeymoon” phase, he or she needs to be prepared for the inverse: a phase called “the wall.” Many people who describe having this uplifting, joyful period soon after acute withdrawals, eventually hit a wall of depression, anxiety, and other psychological symptoms that make resisting cravings more difficult for a certain amount of time.
This “wall” usually pops up between months one and two of sobriety; it does not usually last longer than three months.
By month six of sobriety, a person recovering from a meth addiction should start to feel themselves leveling out a bit; this healing stage is a period of physical, psychological, and social adjustment for the recovering meth addict.
Some people notice a world of difference after a year of being sober. Some days, a person’s past meth addiction may even seem like it was so long ago that even thinking about it just feels odd.
For others, the psychological symptoms and effects of withdrawing from meth can remain for several years after quitting.
Some days will be better than others, but recovery is an ongoing process. Continuing to attend meetings and surrounding oneself with healthy, supportive individuals are some of the best ways to maintain sobriety during the healing stage.
“Recovery is a journey, not a destination.”

Can Meth Addict Be Cured?

No matter how distant the memory of your addiction becomes, addiction is still a mental disease. Unlike an infection, which ceases to cause harm once all bad bacteria are gone, an addiction stays with a person because the chemicals that the person ingested altered parts of the brain and the ways in which it functions. Does this mean a recovering meth addict will always crave the drug?

Not necessarily. While some struggle to stay sober years after their last use, others become extremely comfortable with their sobriety after only a year or two. The brain can be re-wired to think about meth differently. Once a person has been sober long enough, he or she will be able to see with accuracy just how much pain and suffering their addiction has caused, not only for themselves but others as well. What once caused a dopamine rush can make a person sick to his or her stomach if therapy sessions and other forms of treatment are taken seriously.
While there is no cure for meth addiction, things do get easier with time, and if a person is willing to put in the effort, he or she can find happiness and comfort in long-term sobriety.